Tim Tebow didn’t hold back when asked what he thought about University of Maryland’s decision to fire football head coach D.J. Durkin one day after reinstating him.

“It’s amazing how so many of these schools, they are doing one thing, and when they find out it’s not popular, then they’re totally changing,” the 31-year-old former professional football player explained Friday morning on ESPN’s “First Take.”

It starts at the 6:07 mark on the video shared on YouTube. (RELATED: Investigation Into Maryland’s Football Program Following Player’s Death Yields Unexpected Results)

“Look at Tennessee last year and Maryland right now. You know, I think when these universities make decisions: one, they have to wait to try to make the right one, or when they make it, you got to stand up for your decision,” he added. “Or you can just be pushed around non-stop.”

Then he really goes off in the second part of the clip that’s been shared on Twitter.

.@TimTebow went off on Maryland for firing DJ Durkin shortly after reinstating him. pic.twitter.com/vxhKuEyyni

“Because right now, it shows that people are so afraid to have conviction … they’re like, ‘Oh my goodness, social media is against us. Well, we’re going to fire him now,'” Tebow explained. 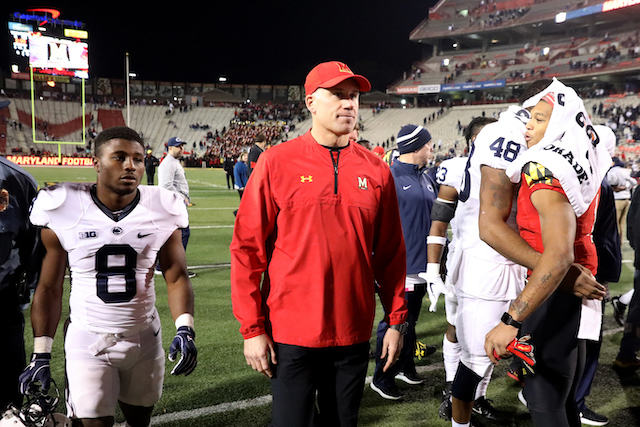 Head coach DJ Durkin of the Maryland Terrapins walks off the field following the Terrapins 66-3 loss to the Penn State Nittany Lions at Capital One Field on November 25, 2017 in College Park, Maryland. (Photo by Rob Carr/Getty Images)

“I want these [university] presidents and [athletic directors] to stand up, and when you say something, have it mean something,” he added. “Let’s be men of our word and have character when we say something we believe in and we have conviction.”

Durkin was first put on leave in August following the death of one of the football players, Jordan McNair, who died of heatstroke during practice. An investigation was launched after his death and over allegations of abuse in the program.

On Tuesday, he was reinstated after the investigation cleared him and the program. Then Wednesday he was let go following a backlash over his rehiring.