Democratic North Dakota Sen. Heidi Heitkamp appeared to endorse a false claim from the state’s Democratic Party suggesting that citizens would lose their out-of-state license to hunt if they vote in this year’s election.

“Voting means you are a resident, it means you pay taxes here, it means that if you want a residential hunting license in Minnesota, it means you’re not going to get that, if you vote here,” Heitkamp told a gaggle of reporters Saturday.

She was responding to a question about a Facebook ad from the Democratic Party warning North Dakota hunters that they might be forced to forfeit their out-of-state licenses if they vote in this election.

“If you want to keep your out-of-state hunting licenses, you may not want to vote in North Dakota,” the ad notes, before linking to a website on the party’s website that makes similar warnings.

PolitiFact rated the claim a “Pants on Fire,” meaning the ad was likely designed to discourage people from voting.

“It’s hard to interpret this in any way except that it seeks to discourage people from voting. But voting will not cost anyone their hunting licenses,” the fact-checker noted in a piece on Friday. 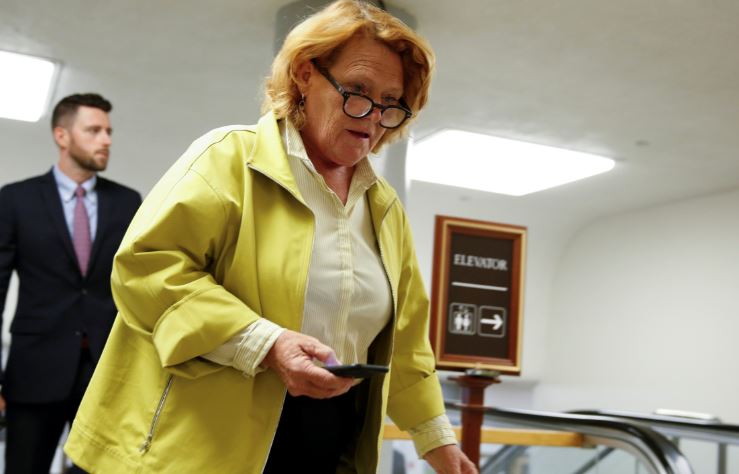 The Fish and Wildlife offices in Montana, Wyoming, South Dakota, Minnesota, and in North Dakota confirmed to PolitiFact that people will not lose their licenses if they vote. Heitkamp has not responded to The Daily Caller New Foundation’s request for comment or clarification.

The Democratic senator, who is who’s trailing Republican challenger Kevin Cramer on average by 11 points, has suffered a series of gaffes recently.

Heitkamp gave a letter to Cramer trying to show how important it is to believe sexual assault survivors.

But the letter inadvertently published the identities of 100 people outing them as “survivors of domestic violence, sexual assault, or rape,” without their consent. (RELATED: Heitkamp Apologizes For Running Ad Naming Alleged Sexual Assault Survivors Without Their Permission)

“I deeply regret this mistake and we are in the process of issuing a retraction, personally apologizing to each of the people impacted by this and taking the necessary steps to ensure this never happens again,” she said in a statement.