According to the Hollywood Reporter, Fonda was at the Women’s Media Awards In New York City when she referred to Trump’s recent attacks on the establishment media as indicative of “parallels” between the Trump administration and the Third Reich.

Fonda said that means it has “never been more important” to vote in next week’s midterm elections. (RELATED: Jane Fonda Wants People To Vote In Midterms Since US Is In ‘Existential Crisis’) 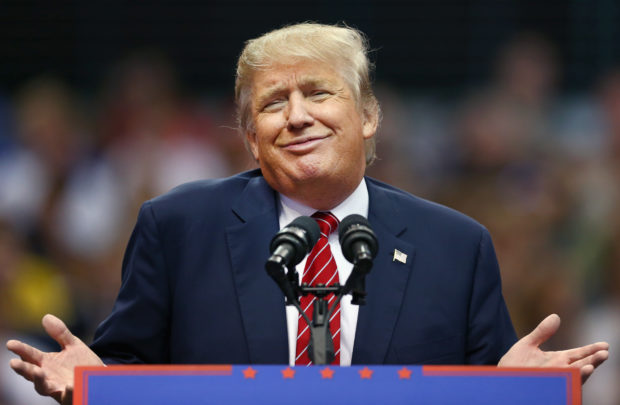 Republican presidential candidate Donald Trump speaks during a campaign rally at the American Airlines Center on Sept. 14, 2015 in Dallas, Texas. More than 20,000 tickets have been distributed for the event. (Photo by Tom Pennington/Getty Images)

“If you’ve read anything about the rise of the Third Reich and Adolf Hitler, you will see the parallels,” Fonda said. “Attacking the media is the first step in the move towards fascism. The cornerstone to democracy is an independent, democratic media.” (RELATED: Jane Fonda ‘So Disappointed’ With Justin Trudeau)

Fonda also noted that “civility” in politics is vanishing, saying, “And we don’t have to take it anymore. Voting is the way to stop it. Everybody has to vote.”

Gloria Steinem, who also spoke at the event, was concerned about America’s supposed failing democracy, telling the crowd that she was particularly upset by the confirmation of Justice Brett Kavanaugh after a series of sexual misconduct allegations almost derailed his nomination. One of his accusers has admitted she never even knew Kavanaugh.

WASHINGTON, DC – JULY 09: U.S. President Donald Trump (R), Judge Brett M. Kavanaugh (2nd R), his wife Ashley Estes Kavanaugh and their daughters, Margaret and Liza, stand on stage after Trump announced the judge as his nominee to the United States Supreme Court during an event in the East Room of the White House July 9, 2018 in Washington, DC. (Photo by Chip Somodevilla/Getty Images)

Steinem declared that she would ignore any Supreme Court rulings that she does not agree with.

“Even if the Supreme Court were to make terribly unfair rulings, if you remember, Martin Luther King said it’s our obligation to disobey unjust laws,” she told the Hollywood Reporter. “We’re not going to obey them.”