WATCH: Philadelphia Police Rip Man Off Of Bus For Not Wearing A Mask

Kanye West wrote a six-figure check for Democratic Chicago mayoral candidate Amara Enyia just less than a week after he said he was “distancing” himself “from politics.”

The rapper and designer, donated $126,460 to Enyia’s campaign, who is trying replace Mayor Rahm Emanuel in the 2019 February election. Emanuel announced on Sept. 4 that he would not be running again. West previously donated $74,000 to Enyia’s campaign and also showed up at a campaign event for Enyia on Oct. 23 in Chicago.

Kanye West departed Amara Enyia’s campaign event after about 5 minutes, before it ended. He did not speak, but was here for the photo opp. pic.twitter.com/lrhwX3RHYz

West announced he was jumping out of the political world in a tweet Tuesday, saying he will completely focus on being creative. Just weeks before, West was in the Oval Office with President Donald Trump, thanking him for his work while wearing a “Make America Great Again” hat. West has been a vocal supporter of Trump for over a year. (RELATED: Kanye West: ‘My Eyes Are Now Wide Open…I Am Distancing Myself From Politics’) 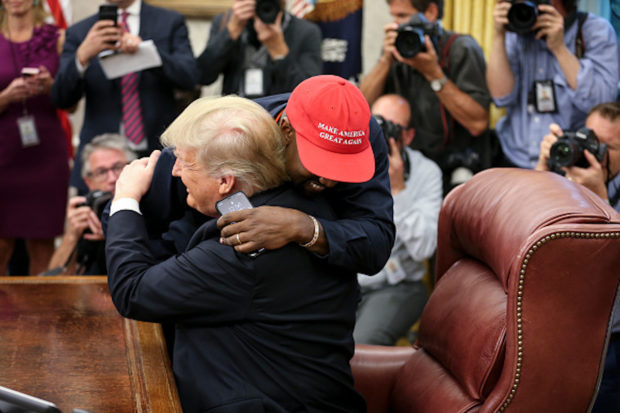 “Celebrity endorsements are great, but in my view they have to be tied to something of substance,” Enyia told the Chicago Tribune after the October campaign event. “And the specific conversation was warranted with Kanye, to make sure there was alignment on the policy platform and issues I’ve advocated for.”

“So we definitely had a conversation, and when we talk about what Chicago needs and what it will take to get us there, he sees this campaign as a vital part of that, and that is what prompted him to support us and get over this financial barrier we have had,” Enyia added.

West has not yet publicly said why he is supporting Enyia for mayor of his hometown city.

1
WATCH: Philadelphia Police Rip Man Off Of Bus For Not Wearing A Mask
US
2
Mystery Footnotes From FISA Report Set For Declassification
US
3
'How About No': Congressman Rips Fauci's 'Papers, Please' Proposal
Politics
4
WaPo Reporter Found Dead In Apartment
Media
5
'Try Tweeting Something Critical Of Chairman Xi': Chinese Journalist Gets Annihilated For Calling Fake Trump Jr A Coward
Politics