Van Hollen told “Fox News Sunday” host Chris Wallace, “I don’t think it’s working, Chris, because what the president is dong is driving away the independent voters, swing voters and a lot of moderate Republican voters.”

The ad, which first appeared on Trump’s Twitter account, depicts the story of Luis Bracamontes, a Mexican who was deported twice from the United States before coming back and killing two police officers. The ad states: “Democrats let him into our country.” (RELATED: Jeff Flake Calls On ‘Republicans Everywhere’ To Denounce New Trump Ad)

Van Hollen claimed the Democratic Party is “against open borders” and dismissed the ad by saying, “Look the president says a lot of outrageous and untrue things.”

The senator also tried to reduce Democratic expectations for Senate gains in next Tuesday’s midterm elections.

“This is the toughest political map any one party has faced in 60 years,” said Van Hollen, who is the chairman of the Democratic Senatorial Campaign Committee.(RELATED: Republicans See Boost From Migrant Caravan Before Midterm Elections While Democrats Continue To Avoid The Issue)

“We do have a path, it is a very narrow path … but the fact that we’re as competitive as we are is a real testament to our senators and our candidates,” he said.

Van Hollen refused to say that he believes the Democrats can get a majority in the Senate because of “too many close races.” 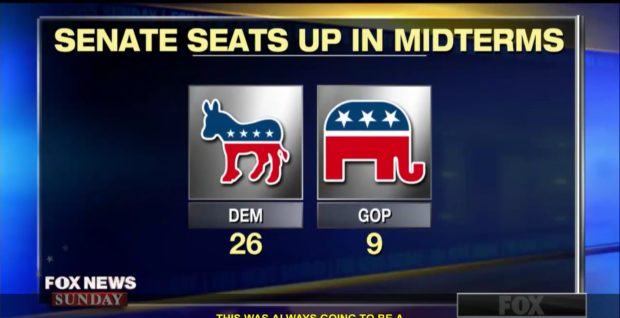 In this week’s midterm elections, there are 26 Senate Democrats seeking re-election versus just nine Republican senators. Ten of the Democrats are in Red States that voted for Trump in 2016.