Pittsburgh Steelers quarterback Ben Roethlisberger honored victims of the Tree Of Life Synagogue shooting Sunday with custom cleats that displayed the team’s logo altered to show the Star of David.

A snap of the 36-year-old Pittsburgh football player’s custom cleats was posted on a Facebook page dedicated to the QB. On the cleats, along with the logo, it contained a message that read “Stronger Than Hate.” (RELATED: Pittsburgh Steelers Superstar Reportedly Makes Decision If He Will Return To The Team)

In a post-game interview following the Steelers 23–16 victory over the Baltimore Ravens, Roethlisberger talked about wearing the cleats and what it meant him.

“Just because we are a week or whatever removed doesn’t mean the pains any less for a lot of people,” the quarterback said. “We are never going to forget. My shoes were in honor of the victims. But also to standing strong for a community and a nation. We need to be stronger than hate and love should conquer everything.”

For Roethlisberger, the shooting hit close to home, as he is friends with Michele Rosenthal, who lost her brothers Cecil and David in the shooting, according to USA Today. 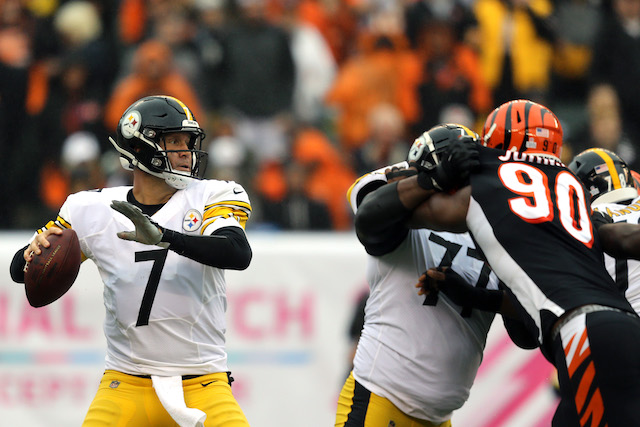 The mass shooting at the Pittsburgh synagogue has been called the deadliest attack on Jews in American history.

After the attack, President Donald Trump pledged full support for authorities and said if there had been an “armed guard” at the temple” nobody would’ve been killed.

“This would be a case for, if there was an armed guard inside the temple, they would have been able to stop him,” Trump shared. “Maybe there would’ve been nobody killed except for [the gunman] … [but] this is a world with a lot of problems [and] it has been for many, many years.”