Four years ago, incumbent Republican Rep. Dave Brat engineered one of the most stunning victories of the 2014 primary season, coming out of relative obscurity to unseat Eric Cantor, who was then the powerful House majority leader.

Brat will look to avoid being on the losing end of a similar upset on Tuesday, when voters in Virginia’s 7th congressional district will either return him to Washington for a third term or give the nod to his Democratic challenger, political neophyte Abigail Spanberger.

The race for Brat’s seat in central Virginia is unique not only because of the unorthodox backgrounds of its candidates, but also because it is now seen as a bellwether for Democratic hopes to gain control of the House for the first time since 2011. If Spanberger, a former CIA case officer and first-time candidate, is successful in her bid to turn the 7th district from red to blue, it could spell trouble for Republicans running in tight races across the country.

A Republican bastion since the Richard Nixon era, Virginia’s 7th district spans the mixed suburban and rural counties north and west Richmond. In 2016, Brat won re-election there by a comfortable 58-42 margin, but this year’s race is a toss-up, according to RealClearPolitics. (RELATED: Dave Brat’s Challenger Apologizes After Threatening Message Left On His Doorstep)

Political analysts have attributed the abnormally close contest to a supposed backlash against President Donald Trump on the part of moderate suburban voters, particularly college-educated women. Democrats hope a Spanberger victory Tuesday could point the way for a “pink wave” — a group of dozens of first-time female candidates seen as challenging Trump’s record on immigration, abortion and health care. 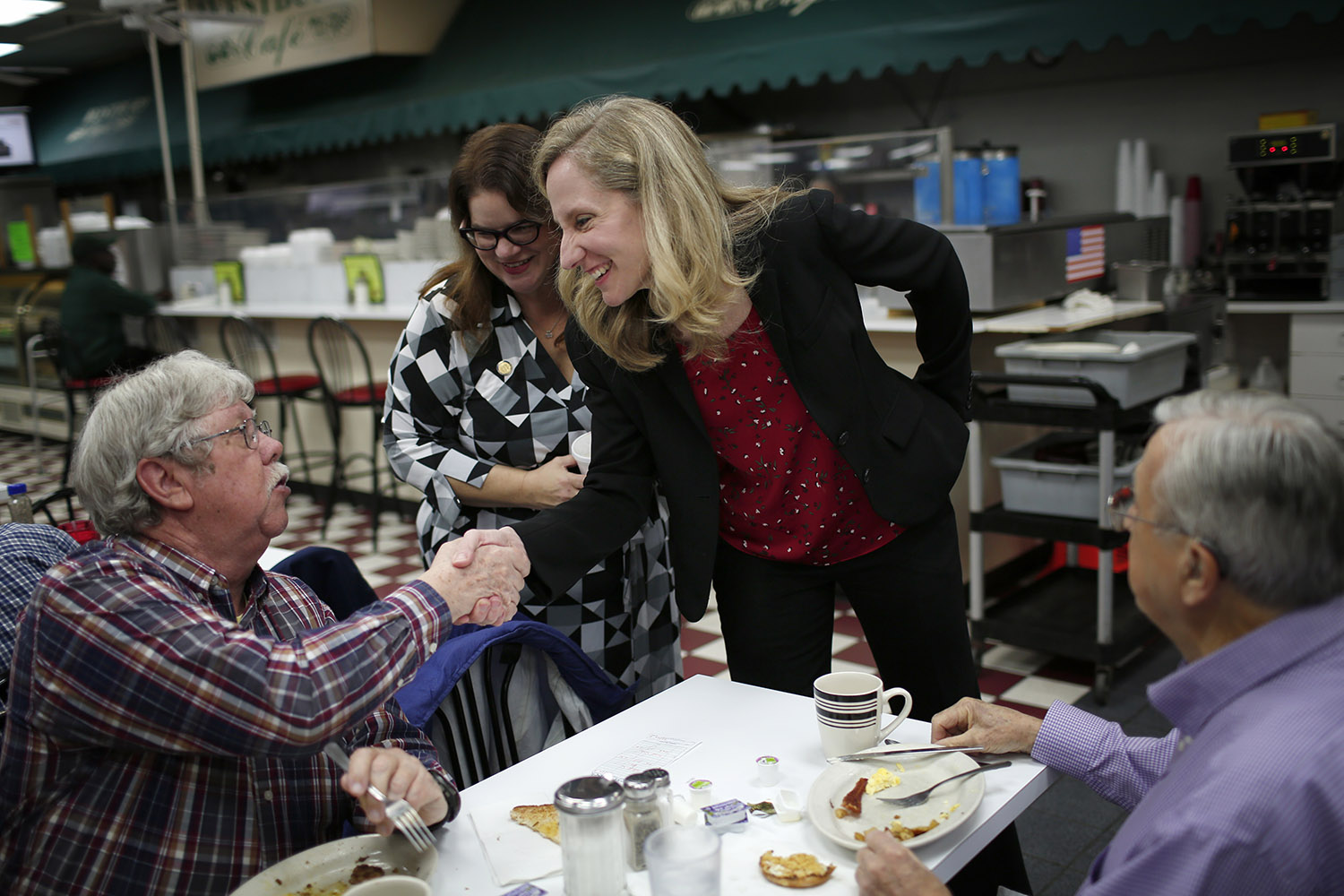 Abigail Spanberger, Democratic candidate for Virginia’s Seventh District in the U.S. House of Representatives, greets breakfast diners at Westbury Apothecary’s cafe, November 5, 2018 in Richmond, Virginia. Spanberger, a former CIA officer and first time candidate, is running against Rep. Dave Brat (R-VA) in a race that is expected to be very close as the U.S. holds its midterm elections tomorrow. (Photo by Win McNamee/Getty Images)

As in other toss-up races, Virginia’s 7th congressional district carries a notable gender gap. Men favor Brat by at least 13 points, while women are backing Spanberger by a 16-point margin, according to an Oct. 29 poll by Christopher Newport University in Virginia.

Spanberger’s polling with women voters is not the only area where she has an advantage over Brat. She has also out-raised the incumbent by a better than three-to-one margin in recent months, taking in nearly $3.6 million in the third quarter alone, the Washington Post reported.

Brat says the Spanberger’s late fundraising surge won’t be enough to sway a majority of 7th district voters, who have given him clear victories in the past two general election contests.

“Spanberger is trying to buy this election and just faking them out with millions and millions that I cannot match in messaging points,” he told conservative radio host Mark Levin in late October. “And I think Virginians are going to see through that.”