The Trump administration officially re-imposed sanctions against Iran’s oil and financial sectors Monday, but Washington is granting waivers that will allow eight countries to continue to import Iranian oil on a temporary basis, according to Secretary of State Mike Pompeo.

Six-month sanctions waivers were granted to China, India, Greece, Italy, Taiwan, Japan, Turkey and South Korea. The exemptions are intended to give the countries — some of Iran’s top oil customers — time to gradually reduce their imports while keeping enough oil supply in the market to avoid a spike in global prices. (RELATED: US Allows Some Countries To Keep Buying Iranian Oil: Report)

Monday’s renewed sanctions are the second set of penalties the Trump administration has imposed on Tehran after withdrawing from the Iran nuclear deal in May. Washington had already hit Tehran with sanctions on its trade in U.S. dollars and precious metals, but the latest round of penalties is expected to be especially severe because it targets Iran’s most lucrative industry and its ties to the global economy.

Many of the sanctions had been lifted in 2015 as part of the nuclear deal, but the Trump administration is re-imposing the penalties in order to force Tehran to negotiate a new agreement that places tighter controls on its nuclear activities, ballistic missile testing and support for proxy forces in the Middle East. The sanctions target more than 700 individuals and business entities tied to Iran’s oil, banking, shipping, shipbuilding and insurance sectors, according to the Department of Treasury’s Office of Foreign Assets Control.

“Treasury’s imposition of unprecedented financial pressure on Iran should make clear to the Iranian regime that they will face mounting financial isolation and economic stagnation until they fundamentally change their destabilizing behavior,” Treasury Secretary Steven Mnuchin said in a statement.

The countries granted sanctions waivers were those that are highly dependent on Iranian oil but had already moved to draw down their imports, according to Pompeo.

“In order to maximize the effect of the president’s pressure campaign, we have worked closely with other countries to cut off Iranian oil exports as much as possible,” he said. “We expect to issue some temporary allotments to eight jurisdictions, but only because they have demonstrated significant reductions in their crude oil and cooperation on many other fronts and have made important moves towards getting to zero crude oil importation.” 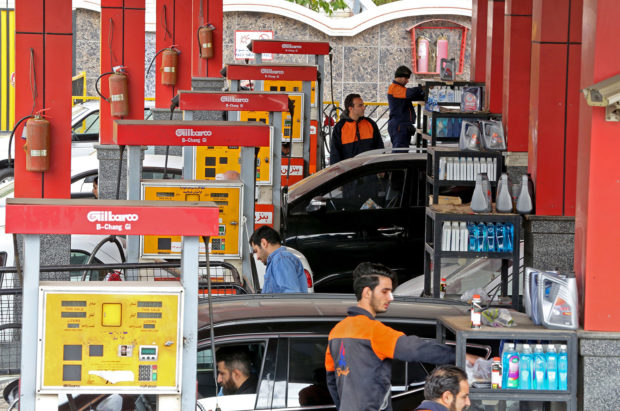 Iranians drivers fill their tanks at a gas station in the capital Tehran on November 5, 2018. – Iran’s President Hassan Rouhani said the Islamic republic “will proudly bypass sanctions” by the United States that took effect on Monday targeting the country’s oil and financial sectors. ATTA KENARE/AFP/Getty Images

Notably, none of the European Union countries that are party to the nuclear deal — Britain, France and Germany — were granted waivers. All three countries have been working to preserve the framework of the deal by setting up financial channels that will allow them to continue trading with Iran.

“This is an economic war against Iran but … America should learn that it cannot use the language of force against Iran,” Rouhani said, according to Reuters. “We are prepared to resist any pressure.”