MSNBC’s Katy Tur laughed her way through interviews with Trump supporters on Sunday and admitted afterward that viewers may be “snickering” at the people she spoke with.

Tur attended a Trump rally in Macon, Georgia, on Sunday and interviewed two Trump supporters on their views about the media and whether or not Trump is a liar.

“No, I don’t,” the man responded. “When — what is it, 90-something percent is negative toward Trump, what do you think?”

The man was referring to a Media Research Center study that found 90 percent of media coverage of Trump in 2017 was negative. (RELATED: Study: 90 Percent Negative Coverage Of Trump In 2017)

Tur denied that such overwhelmingly negative coverage is problematic, responding, “Most of the coverage for any politician is negative.”

“It’s not our job to be a PR person for any politician,” she added. (RELATED: MSNBC’s Katy Tur Becomes Livid When Conservative Guest Points Out Left-Wing Violence)

The man replied, “It’s your job to tell the truth.” 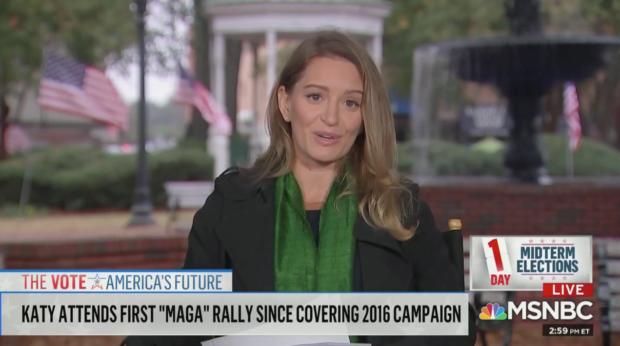 After the man revealed that he gets a lot of his news from Fox News host and Daily Caller co-founder Tucker Carlson, Tur cut back to her live shot.

“Ladies and gentlemen, we have a problem — as Americans, we can’t have our own facts. We can’t just watch one channel because we like what they say,” Tur said.

“I can almost feel a lot of you snickering at home — snickering at those two Trump supporters,” Tur admitted, before adding that liberals sometimes retreat into echo chambers, too.