Georgia Democratic gubernatorial candidate Stacey Abrams did not rule out confiscating firearms if she wins her election, during a CNN interview Monday morning.

Abrams, who has previously supported banning “assault weapons,” did not explain how she will rid her state of guns if people do not voluntarily turn them in.

“You were a cosponsor of legislation that would have required people in Georgia to turn in some of their assault weapons if it passed there,” CNN anchor John Berman said. “You said that’s the beginning of a conversation.”

“What do you want the end of the conversation to be?” Berman asked. (RELATED: Stacey Abrams Used To Write Romance Novels — Here Are The Steamiest Excerpts)

Abrams reiterated that she supports a law to ban assault weapons, and added that while some people may voluntarily turn them in, “there are going to be some people who are held to a higher standard.” 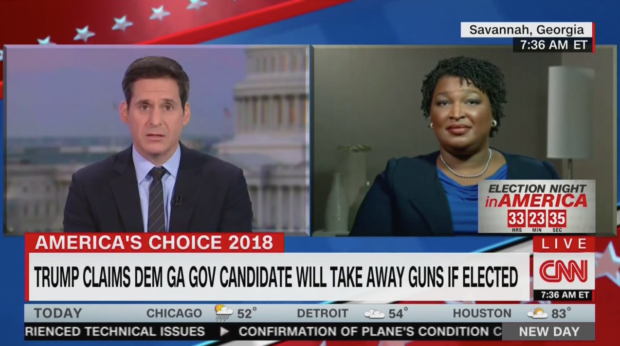 “I do think that in the state of Georgia we’re going to have to figure out how we do this,” she said. “What I want us to do is what we should always do in our legislative process — have a discussion about how we’re going to accomplish our goals.”

“Banning is one thing, requiring people to turn them in is another,” Berman noted.

Abrams said that she cannot give a “hard and fast answer” on whether or not she would support forcing Georgians to turn in banned guns, deferring to the legislative process that would create such a law.