Vox blogger David Roberts must be comatose this morning.

Not because he got into some sort of accident, but because he spent his Saturday night draining his brain of all intelligent life form. What that means is he went on a 27-part Twitter spree to apologize to America for releasing a fat-shaming utterance into the — his word — “noosphere.”

Which is just a fancy way of saying an atmosphere that contains human thought. I could argue that neither of those existed for David, especially the latter, when he took a dump on our minds and then left the mess for anyone else to clean up. I might argue that he was overthinking, but that would give him a spec of credit and compassion that he doesn’t deserve.

But nothing about this is brief, because David subjected us to 27 agonizing thoughts rolling around his brain just so he could publicly unravel his thought process about fat shaming. 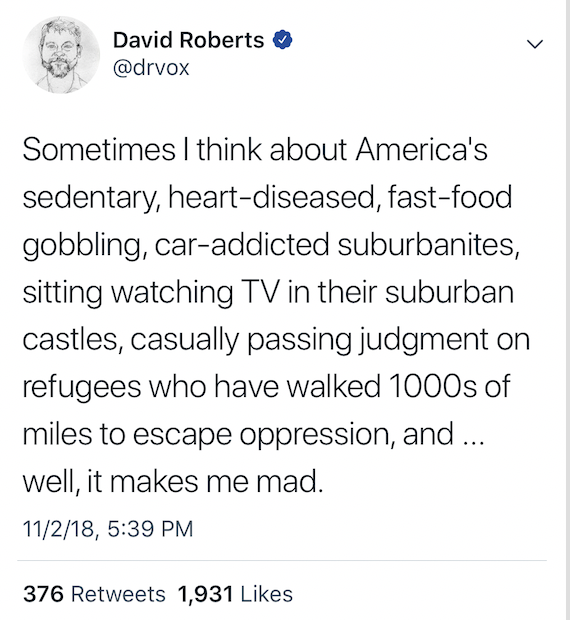 But he was just getting warmed up. Apparently some people took offense, saying that David (I think we’re fully on a first-name basis now) fat shamed them. How else would a person who leads a sedentary, suburbia lifestyle and gobbles Burger King at the pace of a gorilla feel? Of course, a 600-pounder must drive to the Burger King, so he threw that “car-addicted” insult in there just as an aside.

One could consider David’s stream of unconsciousness a crime on humanity.

Here’s what came next: 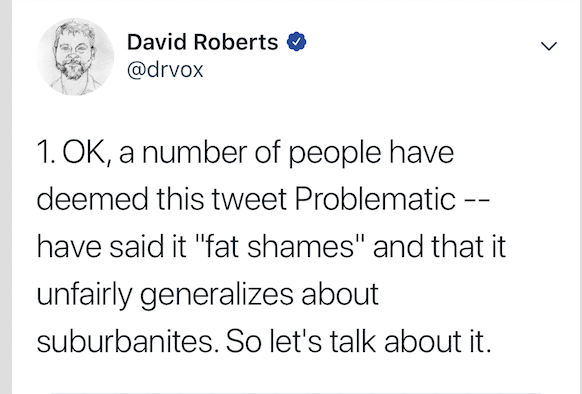 He could’ve stopped at “suburbanites” and called it a night.

But this is a Vox guy with narcissistic tendencies, and a penchant for over-explaining, as the site is meant to do. So he has to take you through his process and eventually make you think he’s an OK guy.

I’m taking you through #2, #3, and #4 quickly, or we’ll be here all day. His stupid, unnecessary apology doesn’t come until Tweet #17. It takes him that long to process. 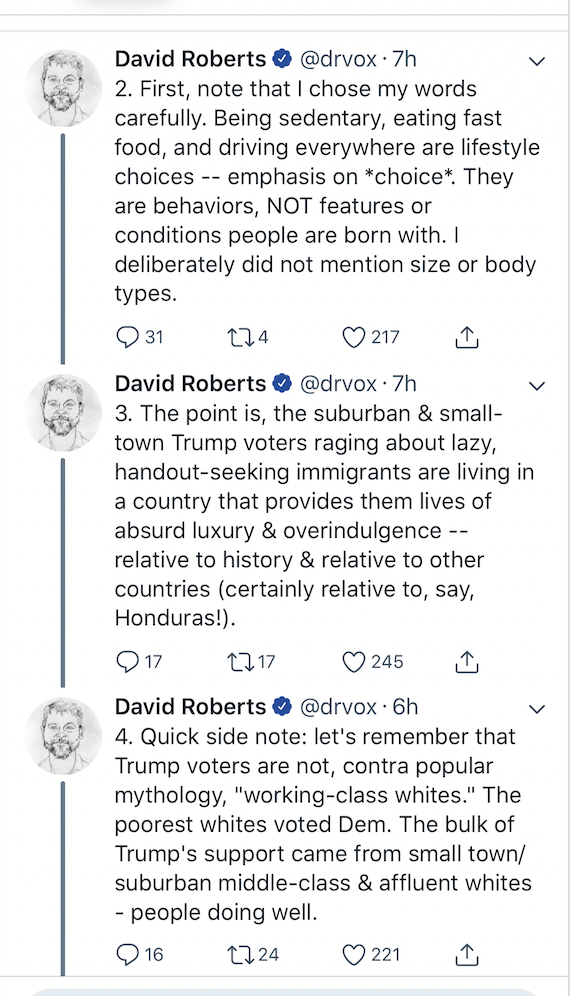 I firmly believe that David is a walking human headache who should be banned from social media for at least a week. And not because I don’t believe in free speech — I adamantly do. I just think David needs a virtual timeout for barfing up all his weird emotions in public and then apologizing for fat shaming and making himself out to be some sort of rehabilitated hero.

He’s about to get “woke.” And if I never heard that word again it’ll be too soon. Also: Please enjoy the moment where he blames his “defensiveness” on being male. On a positive note, I do like the term “galactic shithead” and I think David is one of those. 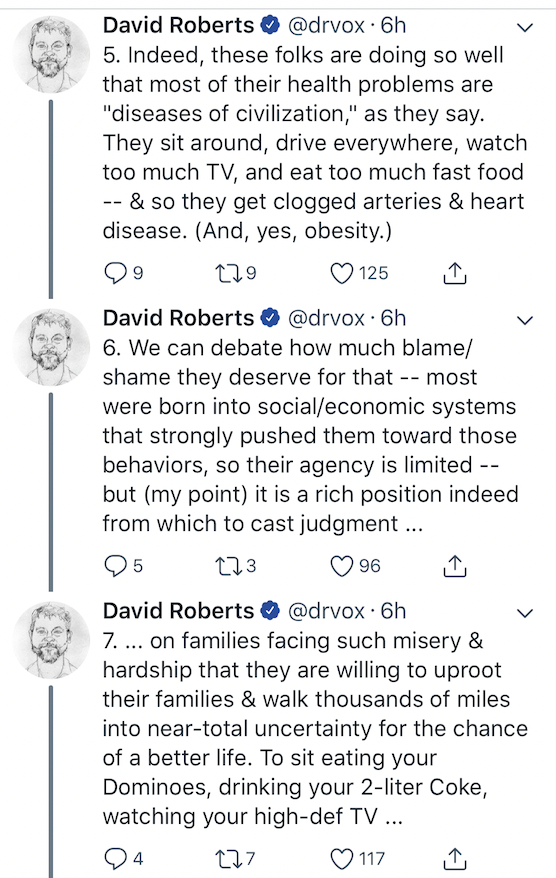 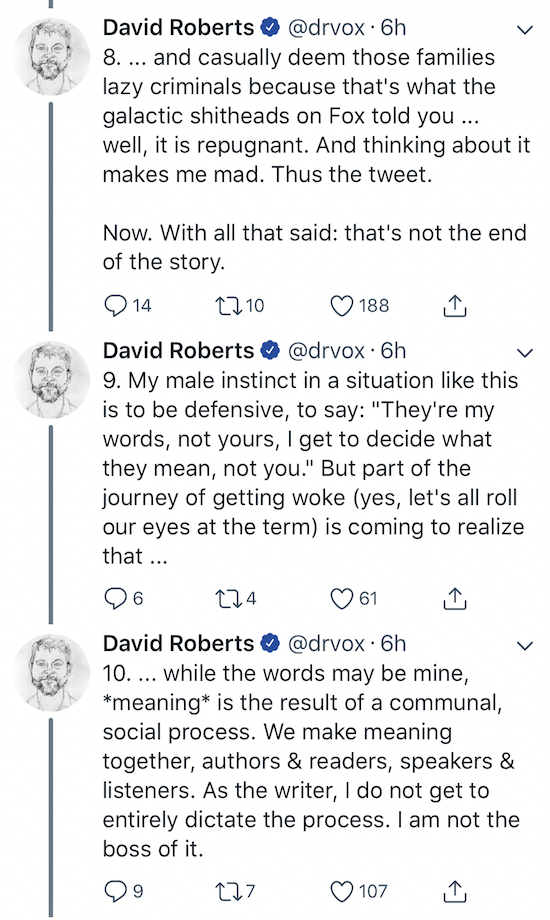 Not to get too deep here, David, but we do not “make meaning” together. You can write what you think — within reason — and not apologize for it.

I’m shuddering inside because we are not even half-way fucking through this. But we are getting close to his ridiculous apology. 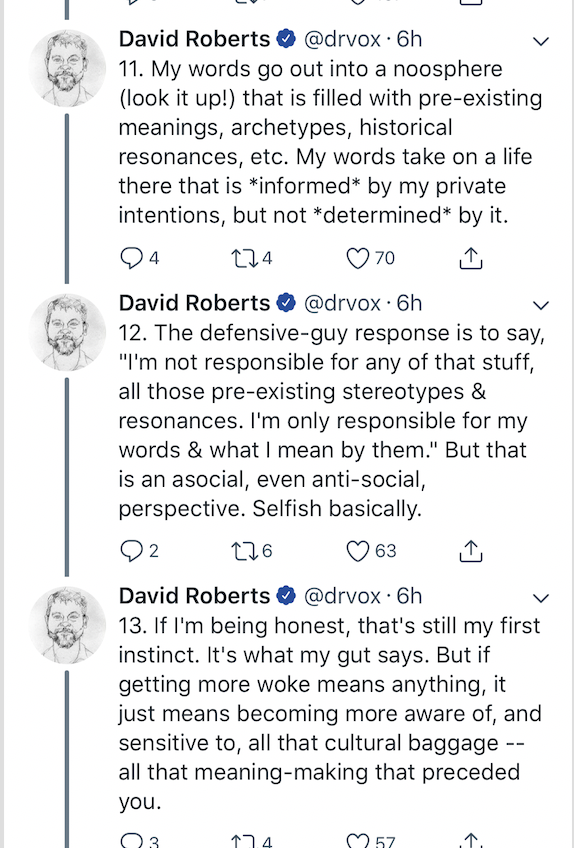 Did someone say selfish? Some might say that taking up the “noosphere” with your drivel is selfish. And I think your gut is what is getting you into trouble. Please stop listening to it. 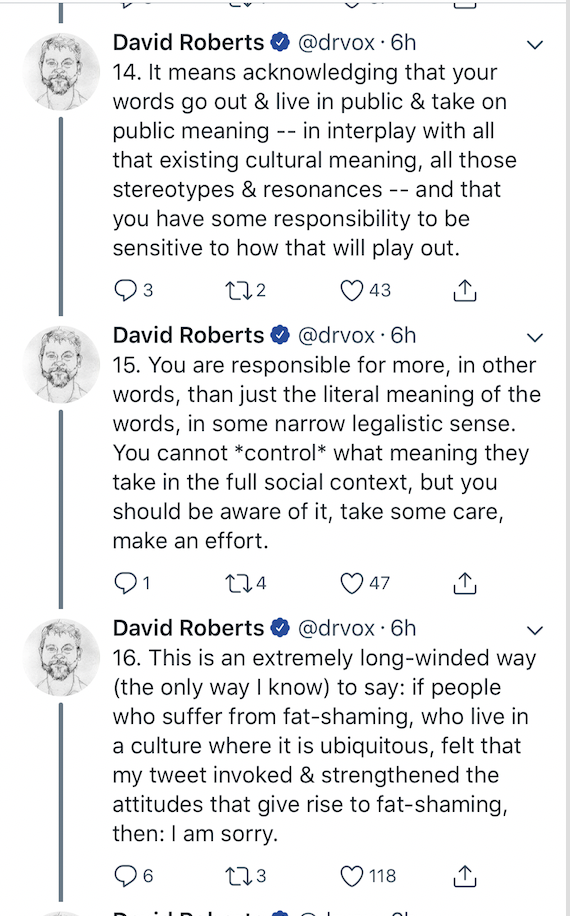 And there it is — the apology. A non-apology at that with the “if you felt … then I’m sorry” format. Oh please. Why bother apologizing?

Since we’ve come this far, we have to keep going. David is about to become the leader of people everywhere who feel they are fat shamed. 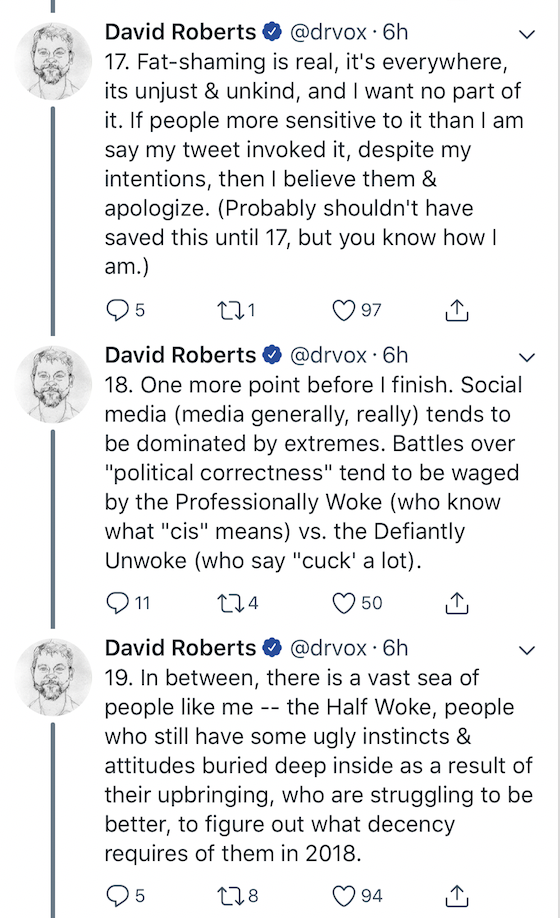 He says “one more point before I finish,” but what he really means is there will be eight more points until he finishes. At this juncture, David has just confessed to being a half woke creep with ugly instincts borne out of his shitty privileged upbringing. Yeah, come to think of it, his parents really should be held responsible for some of this. 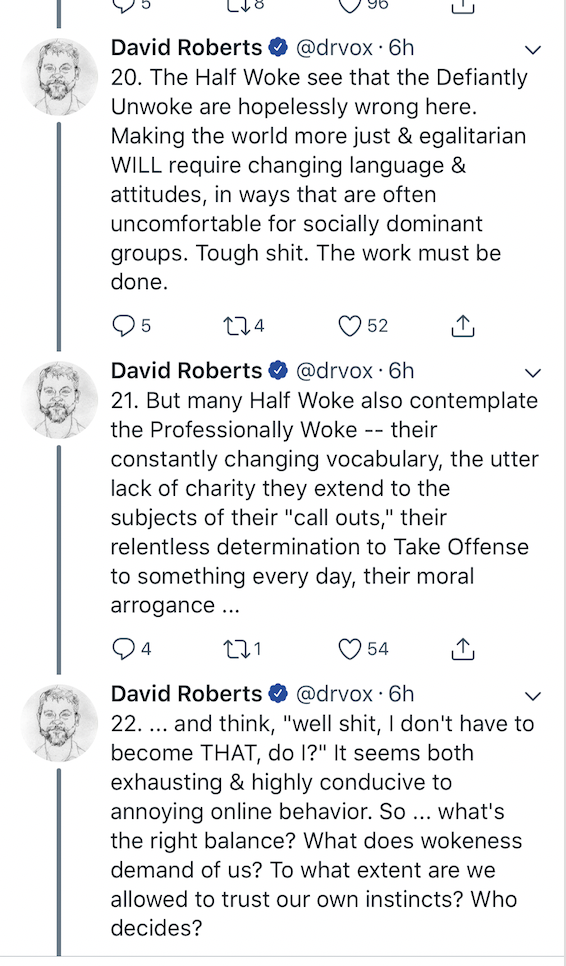 He appears to be having a moment of self-awareness here, but it’s muddled in between terribly deep thoughts about being half-woke,  un-woke and professionally-woke that he lost me at “tough shit.” He also mentions “annoying online behavior,” which — ding! ding! ding! — he doesn’t seem to realize is him. 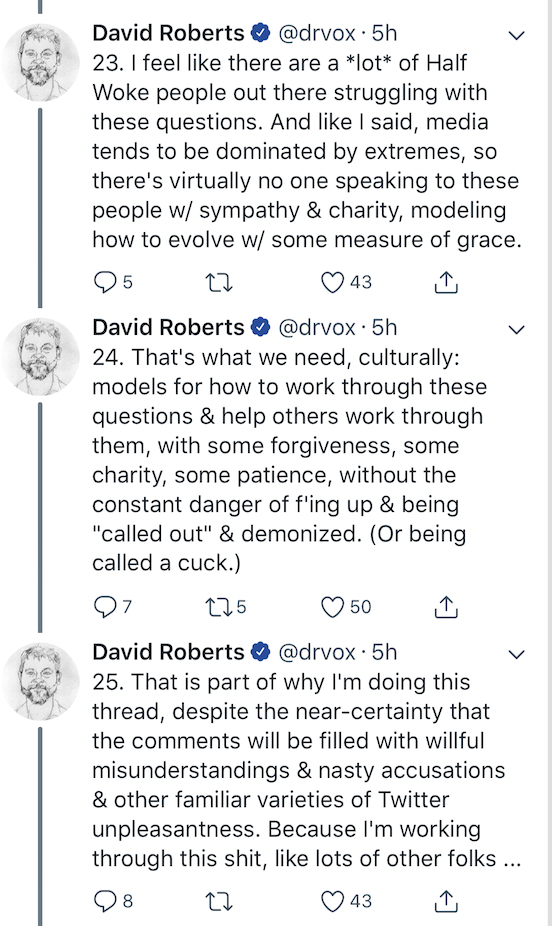 How could he possibly know that he’d receive “willful misunderstandings & nasty accusations” from a 27-tweet marathon one day before the midterms? 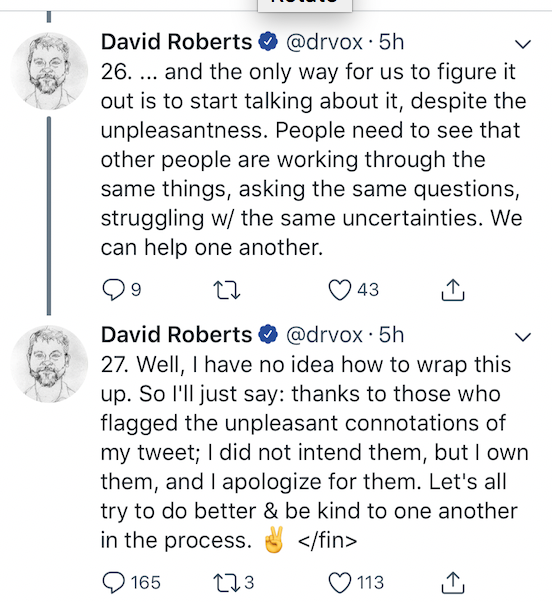 He has no idea how to wrap this up? How about this: Delete your account. In addition, stop trying to speak for us all — “let’s all try to do better & be kind to one another.” (Ugh. Speak for yourself. I take that back. Do not speak for yourself.)

Seriously, David, how about you get a hold of yourself, go buy a jumbo bag of Cheetos with your privileged upbringing and go watch something mindless on Hulu, which yes, you can afford, but those people on the Caravan cannot because they’re just struggling to make it to the border alive.

And yes, eat all the Cheetos so your fingers are too cheese-ridden to go anywhere near a computer.