Menendez defeated his Republican challenger, pharmaceutical executive Bob Hugin, in a race that appeared close for a short period of time with the scandals following closely behind Menendez.

This is incredible. One of the jurors from Menendez’s corruption trial is at his election night party: https://t.co/wH23fIJ15X

Evelyn Arroyo-Maultsby was at Menendez’s party, according to Scott Fallon a reporter for Northjersey.com.

In the video, she said, “I came out here tonight because I know Bob Menendez is a very good man and I was in the courtroom and I saw all of the evidence and they didn’t have enough evidence. What he did wrong, he did nothing wrong. He’s a great man. That’s why I’m supporting Menendez. I voted for him. I voted blue.” 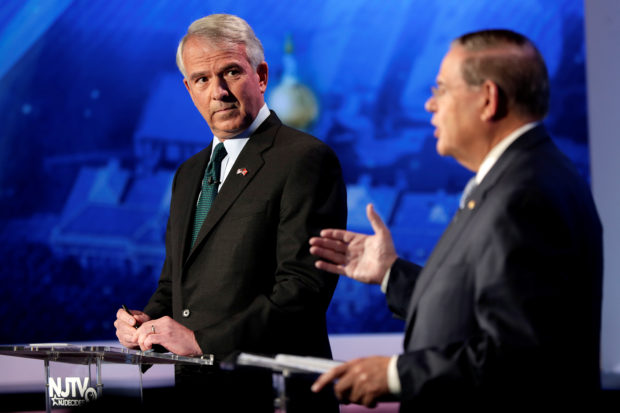 Menendez allegedly flew down to the Dominican Republic with a wealthy friend and then had sex with underage prostitutes. That friend, Salomon Melgen, is currently serving 17 years in prison for Medicare fraud. (RELATED: Pompeo: National Security ‘Risk’ Belongs To Menendez)

Among the supporters tonight ⁦@SenatorMenendez⁩’s HQ is Evelyn Arroyo-Maultsby, a juror on his federal corruption trial. She achieved some fame when she left the jury last year during deliberations to go on vacation. She would’ve voted for acquittal. ⁦@northjersey⁩ pic.twitter.com/mVNSJdwGtK

The allegations against Menendez were highlighted in the midst of an indictment against him on corruption charges.

Despite the allegations, The Star-Ledger endorsed him with the straight-forward editorial “Choke it down, and vote for Menendez.” The op-ed excused his past behavior by simply saying “He’s no gem.” (RELATED: New Jersey Newspaper Endorses Bob Menendez: ‘Choke It Down’)