With 91 percent of precincts reporting, the Republican had an over 200,000 vote lead over his Democratic opponent.

DeWine, a former two-term United States senator and current Ohio attorney general, faced off against Cordray, a former Obama-era federal consumer watchdog and “Jeopardy!” champ, in a rematch of the state’s 2010 attorney general race. DeWine won by a slim margin.

Cordray’s message to voters centered around “renewable energy, reducing gun violence, criminal justice, health care, workers’ rights and more,” according to Cincinnati.com, while DeWine focused on the strong economy and the need to keep things rolling along. 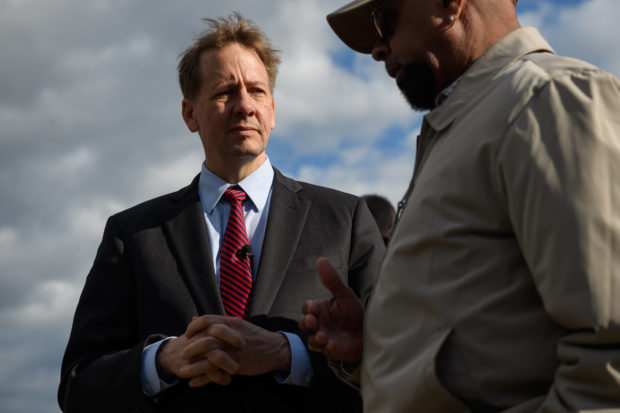 WARREN, OH – OCTOBER 23: Former Ohio Attorney General and Democratic Gubernatorial Candidate Richard Cordray holds a press conference with labor leaders from the UAW and USW at the site of the former RG Steel on October 23, 2018 in Warren, Ohio. Cordray is running against Republican candidate Ohio Attorney General Mike DeWine for the governorship of Ohio, currently held by Republican and 2016 Presidential candidate John Kasich, who has reached his term limit. (Photo by Jeff Swensen/Getty Images)

In a race Cincinnati.com called the “nerdiest in the country” — featuring both Cordray and DeWine — current Republican Gov. John Kasich endorsed DeWine, though the two only shared a stage once during the entire election season.

Treading a thin line between appealing to both Trump and the anti-Trump Kasich’s supporters, DeWine often joked that he is one of the few things both Kasich and Trump can agree on. 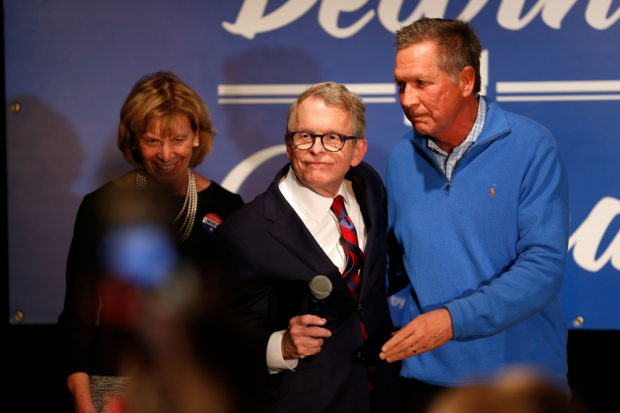 COLUMBUS, OH – NOVEMBER 02: Republican Gubernatorial Candidate Ohio Attorney General Mike DeWine hugs Ohio Governor John Kasich after the governor spoke about why DeWine should be elected next Tuesday, during a campaign event at the Boat House at Confluence Park on November 2, 2018 in Columbus, Ohio. DeWine is running against former Ohio Attorney General and Democratic Gubernatorial Candidate Richard Cordray for the governorship of Ohio, currently held by Republican and 2016 Presidential candidate John Kasich, who has reached his term limit. (Photo by Kirk Irwin/Getty Images)

Polling had remained close throughout the election season. Cordray held a 5-point lead over his GOP opponent in a Gravis Marketing poll released the Friday before election day, but another released on Thursday showed DeWine with a .2 percent lead. (RELATED: Barack Obama Responds Multiple Times To Hecklers During Florida Campaign Rally)