Appearing on “Fox & Friends” Wednesday morning, Conway minimized Republican losses in the House and emphasized the party’s achievements in the Senate, noting that although the Dems “picked up a few seats here and there, this president has made history yet again last night.”

“You know, in the last 80 years the party in power has only picked up 8 Senate seats,” Conway continued. “And last night the president, by his leadership and by his engagement on the ground for these candidates again and again, has produced at least three new Senate seats … possibly five.” She called that “truly historic.” (RELATED: Democrats Turn The House Blue Regain Majority Lost in 2010) 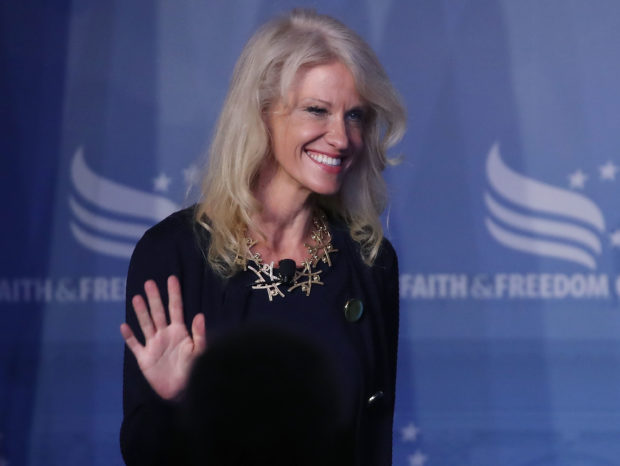 White House Counselor Kellyanne Conway is introduced to speak during the Faith and Freedom Coalition 2017 annual conference at the Omni Shoreham hotel on June 9, 2017 in Washington, DC. (Photo by Mark Wilson/Getty Images)

Conway insisted that those Republican candidates who “didn’t work with the president” have unsuccessful electoral results, while those who benefited from Trump’s “six-day swing” of “packed houses” won their respective contests.

When asked if Trump would reach out to the Democratic-controlled House of Representatives, Conway alleged that the president’s past bipartisan work on the opioid crisis and his willingness to find a DACA plan that everyone can live with are good examples. (RELATED: Trump Promises To Support Pelosi If She Faces Revolt From Democrats)

She suggested it was the Democrats who have to decide whether they want to make progress on policy because right now they constitute “a tale of two Democratic parties,” those who say “we want to work” and those who talk only about “subpoenas and investigations.”