American Airlines announced that it will allow early boarding for people with nut allergies so they can wipe down their seats to avoid allergens.

The airline announced its new policy, which will go into effect Dec. 12, in a Tuesday filing with the U.S. Transportation Department. The change comes in response to complaints that Food Allergy Research & Education and the mother of a highly allergic boy filed against American Airlines in 2017. (RELATED: United Airlines Gives Free Flights To Illegal Immigrants) 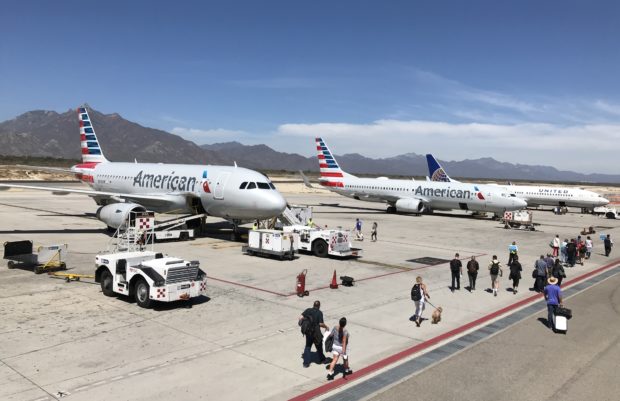 Passengers walk on the tarmac to board an American Airlines plane at Los Cabos International Airport, in Los Cabos, Baja California Sur state, Mexico on March 14, 2018.
Despite a surge of violent crimes in popular tourist areas such as Los Cabos and Cancun, tourism is Mexico’s third largest source of foreign exchange. In 2017 the country hit a new record — 39.3 million tourists who generated $21 billion in business. (DANIEL SLIM/AFP/Getty Images)

“Customers with nut allergies who would like to board flights early to wipe down surfaces may ask to do so at the gate,” an airline representative told Bloomberg.

American Airlines does not serve peanuts to its passengers in-flight. Still, the airline said it could not guarantee that its passengers would not come into contact with peanuts on its planes. Food Allergy Research & Education mentioned in its complaint that it is not possible for passengers with allergies to wipe down their seats and tray tables during general boarding.