New York police are investigating a series of three bias crimes perpetrated by a gang of teenagers who are reportedly targeting Jewish people.

Police said that a group of black teenagers between the ages of 12 and 14 wearing hoodies committed the anti-Semitic attacks on Saturday within a 45-minute time period. The group first allegedly pushed a Jewish youth from behind and knocked off his hat, then threw a metal pipe into the glass window of a synagogue, and lastly knocked a 10-year-old Jewish girl to the ground. (RELATED: NYT Fears Anti-Semitic Threats Could Be ‘Setback’ For the Man Who Made Them)

“When you look at the totality of what we have here, there is a nexus to the Jewish faith in all three,” said NYPD Chief of Detectives Dermot Shea during a press conference, according to ABC 7.

Additional footage of the incident at Synagogue Volkan in #Brooklyn. Call @NYPDtips at #800577TIPS with information. pic.twitter.com/bt5r39t7nw

Police arrested suspects in connection with the incidents, which they are investigating as hate crimes, after circulating surveillance footage of the suspects. Authorities have not released the suspects’ names as they are minors.

The NYPD noted that there has been a recent surge in hate crimes, especially anti-Semitic crimes, in New York. Authorities reported a total of 309 hate crimes committed in New York from January to October, 159 of which were anti-Semitic. 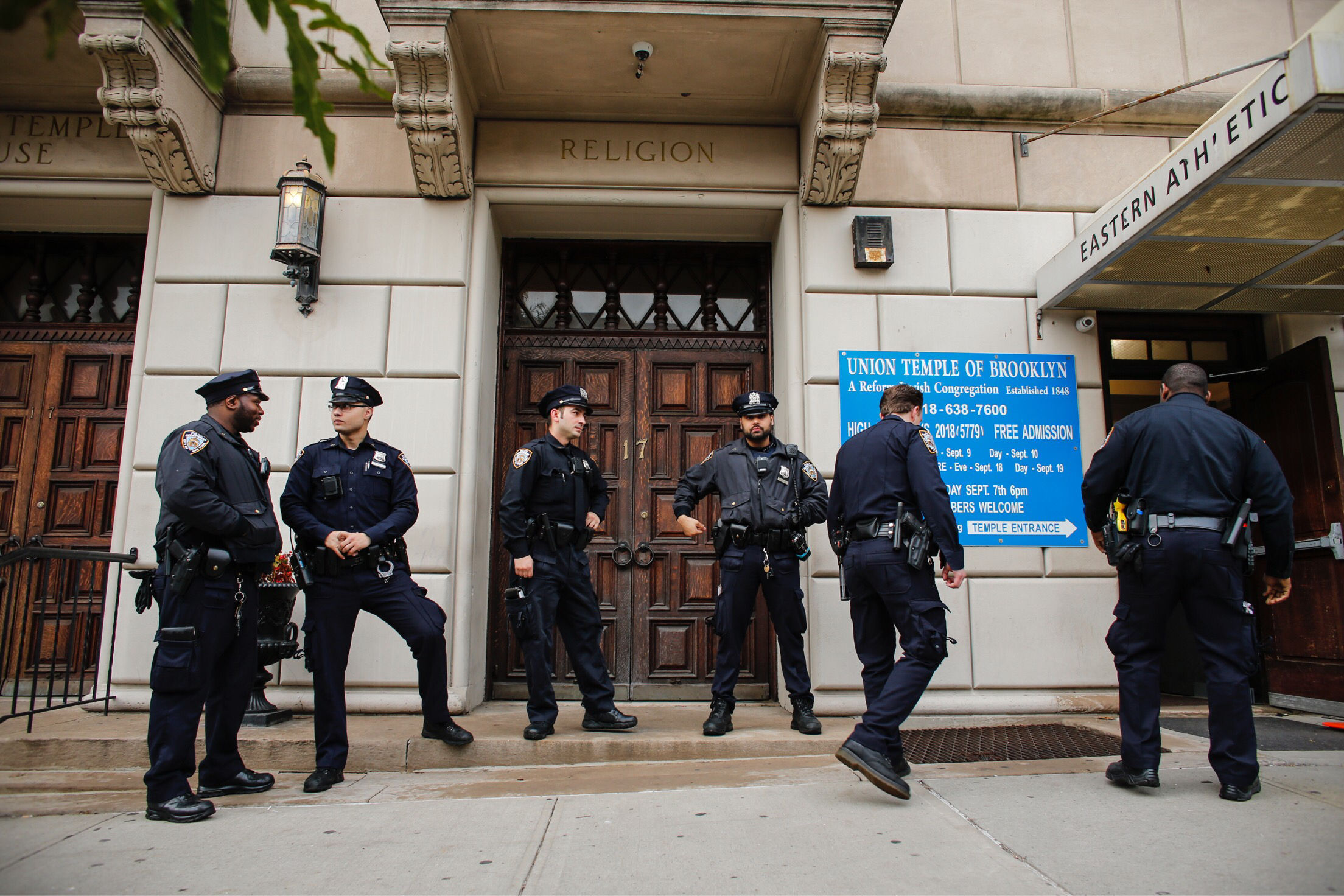 NYPD officers stand guard at the door of the Union Temple of Brooklyn on November 2, 2018 in New York City. – New York police were investigating anti-Semitic graffiti found inside a Brooklyn synagogue that forced the cancellation of a political event less than a week after the worst anti-Semitic attack in modern US history. (KENA BETANCUR/AFP/Getty Images)

Two days before the teenagers’ reported crimes against Jewish people, officials at a Brooklyn synagogue found threatening, Neo-Nazi graffiti inside their building on Nov. 1. Authorities said the suspect in that case is “described as a male Black, approximately 20-years-old, 5’8,″ 140 lbs, with black hair and last seen wearing a red suit jacket,” according to security footage.

“None of it, none of it will ever be tolerated in New York City … everybody in NYC and our nation should pay attention to what happened in Pittsburgh and understand it should never happen in our nation,” O’Neill told ABC.