South Carolina Republican Sen. Lindsey Graham suggested the Democratic Party should listen to the advice of liberal activist and filmmaker Michael Moore on “The Story With Martha MacCallum” on Thursday night.

MacCallum asked Graham about Moore’s comments on MSNBC’s “Morning Joe” Wednesday. During his appearance, Moore stated, “We have to run a beloved American. Obama became beloved the night of that convention and he was beloved from that moment on. It’s gotta be like a Michelle Obama or a Sully Sullenberger.”

“He feels pretty good because he looked at the midterms and says Michigan, Pennsylvania, Wisconsin all turned blue. Those are formidable changes that we saw in the midterms in terms of 2020. A quick thought on that for me,” MacCallum followed up. (RELATED: Lindsey Graham Rips WH Press Corps After Tense Press Conference With Trump) 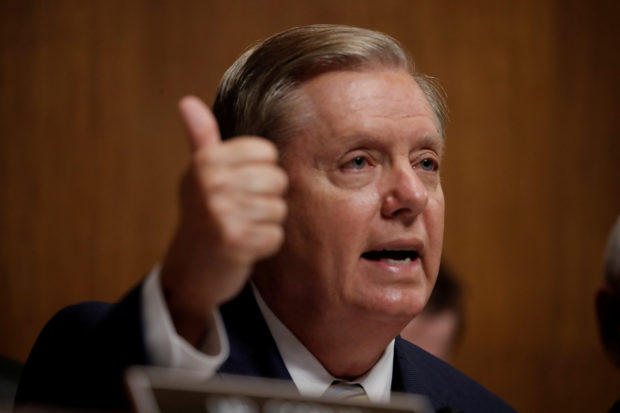 U.S. Senator Lindsey Graham (R-SC) speaks as members of the Senate Judiciary Committee meet to vote on the nomination of judge Brett Kavanaugh to be a U.S. Supreme Court associate justice on Capitol Hill in Washington, September 28, 2018. REUTERS/Jim Bourg

“I think President Trump is going to be hard to beat. Midterms basically defied expectations. We actually grew the majority in the Senate. Name one time that has happened, maybe once in the last 100 years. And the losses in the house were a lot less than historical. I’m ready to govern, I’m ready for 2020, I’m all in for Trump. Here’s my advice for the Democratic Party, keep listening to Michael Moore, he will steer you in the right direction.”