Video game enthusiasts expecting a book about the history of Super Mario Bros. 3 were surprised last week when they instead received a collection of political poetry titled “Grabbing Pussy.”

Due to a printing snafu, an undetermined amount of customers who ordered a book titled, “Super Mario Bros. 3,” from Amazon received disguised copies of a book inviting them to explore “the psychosexual obsessions that have burst to the surface of today’s American politics,” Polygon reported Wednesday. 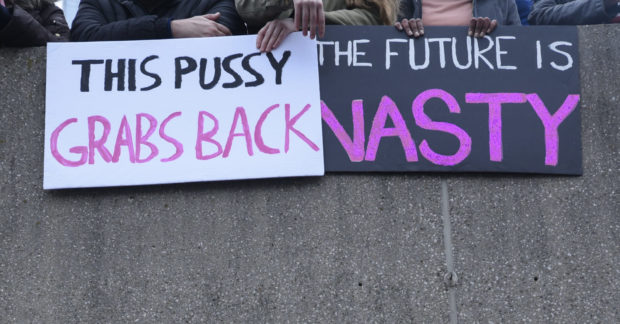 The books looked normal on the outside, but beyond the cover, readers found a collection of poems by performance artist Karen Finley, addressing “the Shakespearean dynamics that surface when libidos and loyalties clash in the public.”

Finley is known for her “activist” performance art, including rolling around on a mattress slathered in honey and covering her naked body in chocolate to “speak out against sexual violence, degradation of women, incest and homophobia.”

One customer found the misprint exceptionally humorous, tweeting a photo of a poem that he discovered in his copy titled “Dic Pics, Or, The Case Of Anthony Weiner.”

This is one whopper of a printing error, @BossFightBooks pic.twitter.com/SHPPuYmyRR

The mix-up happened at the printer shared by the two publishers.

“I talked to the rep at our printers, and he said that the two books had the exact same page count, paper type, and specs, and they were right in line next to each other. So I guess they didn’t notice when some SMB3 covers were put on some poetry collections,” publisher Boss Fight Books tweeted on Wednesday.

The publisher said he was unsure of how many misprints made it out of the printing house, but advised customers that all copies in stock at the publisher were normal. “So, if you want an actual SMB3 copy, maybe order directly from us for now?” he suggested. “And if you want a RARE LIMITED EDITION anti-Trump poetry collection with a Super Mario cover, maybe pick up a book from Amazon and see if you get lucky!”