The comments came during a discussion Thursday on “The View” over Acosta getting his WH credentials revoked over what Press Secretary Sarah Sanders called “inappropriate touching” on the aide.

Meghan McCain said that it was “100-percent” inappropriate for the CNN reporter to have “pushed” the aide’s arm away. Joy Behar, however, argued that the aide “shouldn’t have touched” Acosta.

“He’s blocking her, he’s not actually … he’s blocking her,” Whoopi Goldberg responded as video of the incident from the presser played. (RELATED: ‘The View’ Criticizes Hillary Clinton Over Defense Of Bill Clinton’s Sexual Misconduct Accusations [VIDEO])

“Well, she shouldn’t have touched him, maybe, “Behar interjected.

McCain then asked the ladies if the situation were reversed and it was a “[Barack] Obama press conference and a Daily Caller reporter doing this, I think there are a lot of people on the Left that would be saying that it’s inappropriate for them to be acting that way.”

“I learned very early on that what I saw was battery,” Sunny Hostin replied. “Not by Jim Acosta but by the young White House aide. When you are holding something … and you snatch this from me, this cup is now an extension of me. And that means you’ve battered me. You’ve assaulted me.” 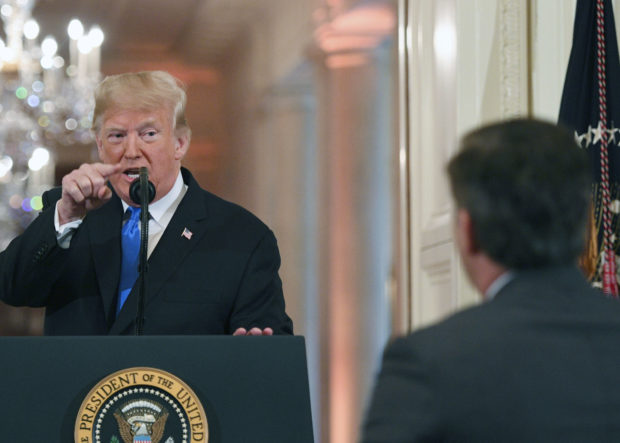 TOPSHOT – US President Donald Trump points to journalist Jim Acosta from CNN during a post-election press conference in the East Room of the White House in Washington, DC on November 7, 2018. (Photo by Jim WATSON / AFP) (Photo credit should read JIM WATSON/AFP/Getty Images)

“So you’re blaming the woman in this situation,” Abby Huntsman interjected.

“So it’s the woman’s fault for doing her job?” McCain quipped, adding sarcastically, “So that White House intern should be arrested for battery?”

Hostin refused to answer and just said, “I’m telling you what the law is.”

Goldberg then explained that she wasn’t making excuses for Acosta, but questioned how much a person can take when they are being yelled at and called “fake.”

“I don’t know how long I could be a nice person if I got my face yelled at constantly that I was fake and a liar and a terrible person,” Goldberg shared. “I think I would start to get a little crappy also. I’m not making excuses. But I do wonder how long folks are supposed to be nice and take it.”