At least five people have died in the wildfires chewing up tens of thousands of acres of land in Northern California, The Associated Press reported Friday.

Investigators found five people dead in cars that were burned by wildfires in Northern California, the report noted. There are fires crisscrossing other parts of the state that have forced officials to call for mass evacuations.

The Woolsey fire cut swaths of destruction through Ventura and Los Angeles counties throughout the day Friday, closing freeways and forcing evacuations from Calabasas and Thousand Oaks to Malibu. The blaze torched more than 10,000 acres.

Fire officials say at least 20 homes were destroyed, perhaps more. “It’s been a long night,” Corey Rose, an assistant chief with the Los Angeles Fire Department, told reporters. “But what makes this good is that we’ve done it together.”

Harrowing video from Michael Coons shows the #WoolseyFire in Ventura County the evening it broke out and began to rapidly spread, fuelled by strong winds: https://t.co/dPwSezbtM3 pic.twitter.com/eG9OBuxAAj

The National Weather Service issued a red-flag fire warning through Friday night as forecasters said wind gusts of 40 to 50 mph will blow the valleys and coasts. Meanwhile, roughly 88,000 homes in Ventura and Los Angeles counties were evacuated Friday morning. 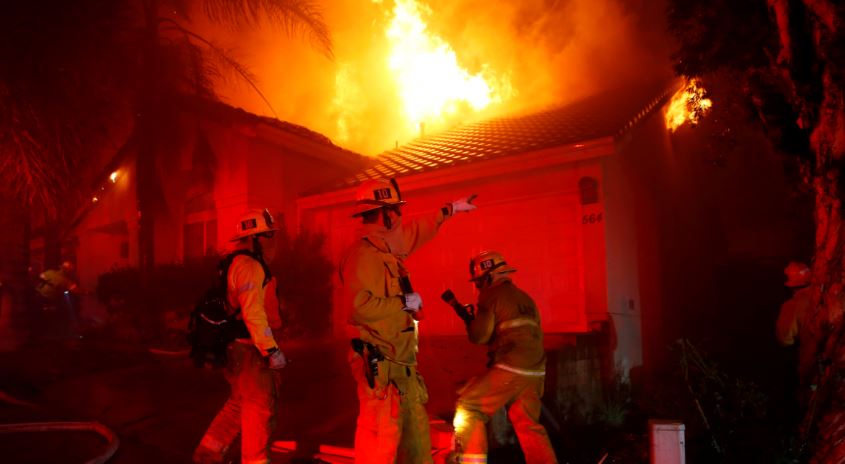 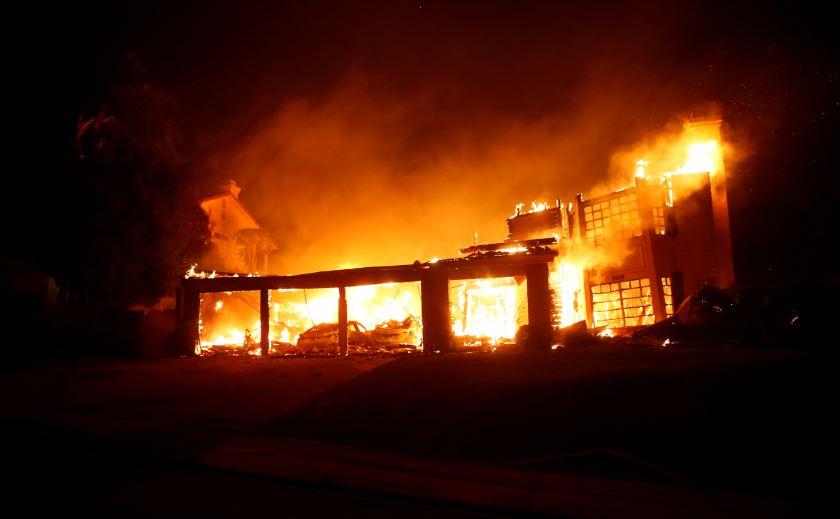 A home burns during a wildfire that claimed dozens of homes in Thousand Oaks, California, U.S. November 9, 2018. REUTERS/Eric Thayer 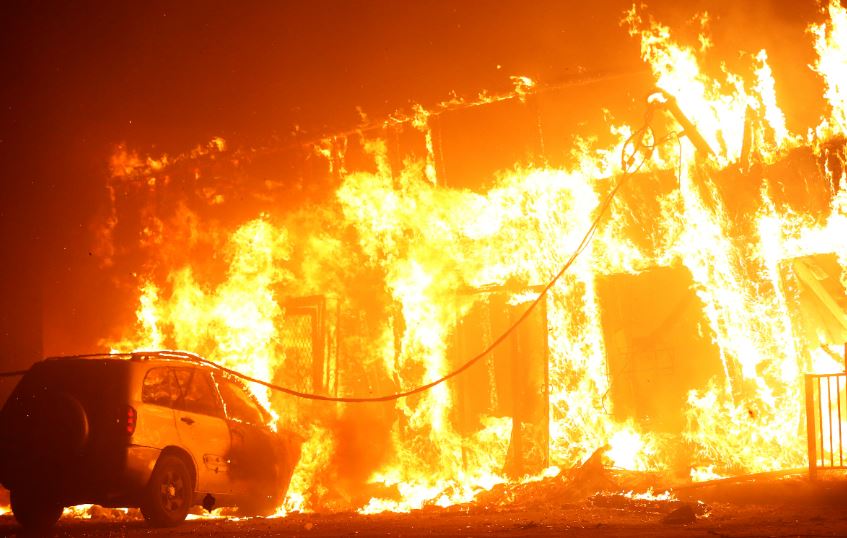 A structure is seen engulfed in flames during the Camp Fire in Paradise, California, U.S. November 8, 2018. REUTERS/Stephen Lam

Resident Melissa Snyder said it had been a hellish 24 hours for her family. One of her close family friends was killed Wednesday in a mass shooting that took place at a country bar in Southern California.

“We didn’t get over the one tragedy until the next thing started,” Snyder said. Her daughter, Kaylee, said the normally deserted 101 Freeway was “like you were leaving hell.”

There are three fires coursing through the state. The Camp Fire was around 5 percent contained Friday morning with more than 2,200 firefighters in 303 fire engines, 11 helicopters and other vehicles working to control the blaze, according to Cal Fire.

The Hill Fire torched about 10,000 acres. No homes have been destroyed but several other structures and RVs have been consumed by the blaze. The Woolsey Fire blasted around 8,000 acres between Thursday evening and Friday morning.

The #WoolseyFire (smoke plume) in California as seen from our GOES-16 satellite. Crazy. Thoughts to those affected. #FirstAlertWX @ActionNewsJax @WOKVNews pic.twitter.com/TFc7IlSIYt

California has been whipsawed this year by several wildfires.