A Somali-born man allegedly loaded a pick-up truck with gas canisters and set it on fire before stabbing three people Friday in Melbourne, Australia, in an attack authorities are calling terrorism.

Witnesses on a busy street of Melbourne reported hearing a large boom come from the vehicle before it caught on fire and a man came out with a knife, CNN reported.

“This is an evil and terrifying thing that has happened,” said Victoria State Premier Daniel Andrews.

The attacker was shot by police after stabbing three people, killing one.

The Islamic State (ISIS) claimed responsibility for the attack, although provided no evidence, reported CBS News.

“The terror group has issued previous claims without offering evidence to prove any link, but in other cases subsequent videos have shown attackers pledging allegiance to ISIS,” according to CBS.

After police arrived on the scene, the attacker allegedly punched through a police car window and lunged at officers before one shot him in the chest.

“From what we know of that individual, we are treating this as a terrorism incident,” Victoria Police Commissioner Graham Ashton told Reuters of the suspect, who officials said was 31 years old. (RELATED: Australia’s Migrant Intake Hits Ten Year Low Amid Crackdown) 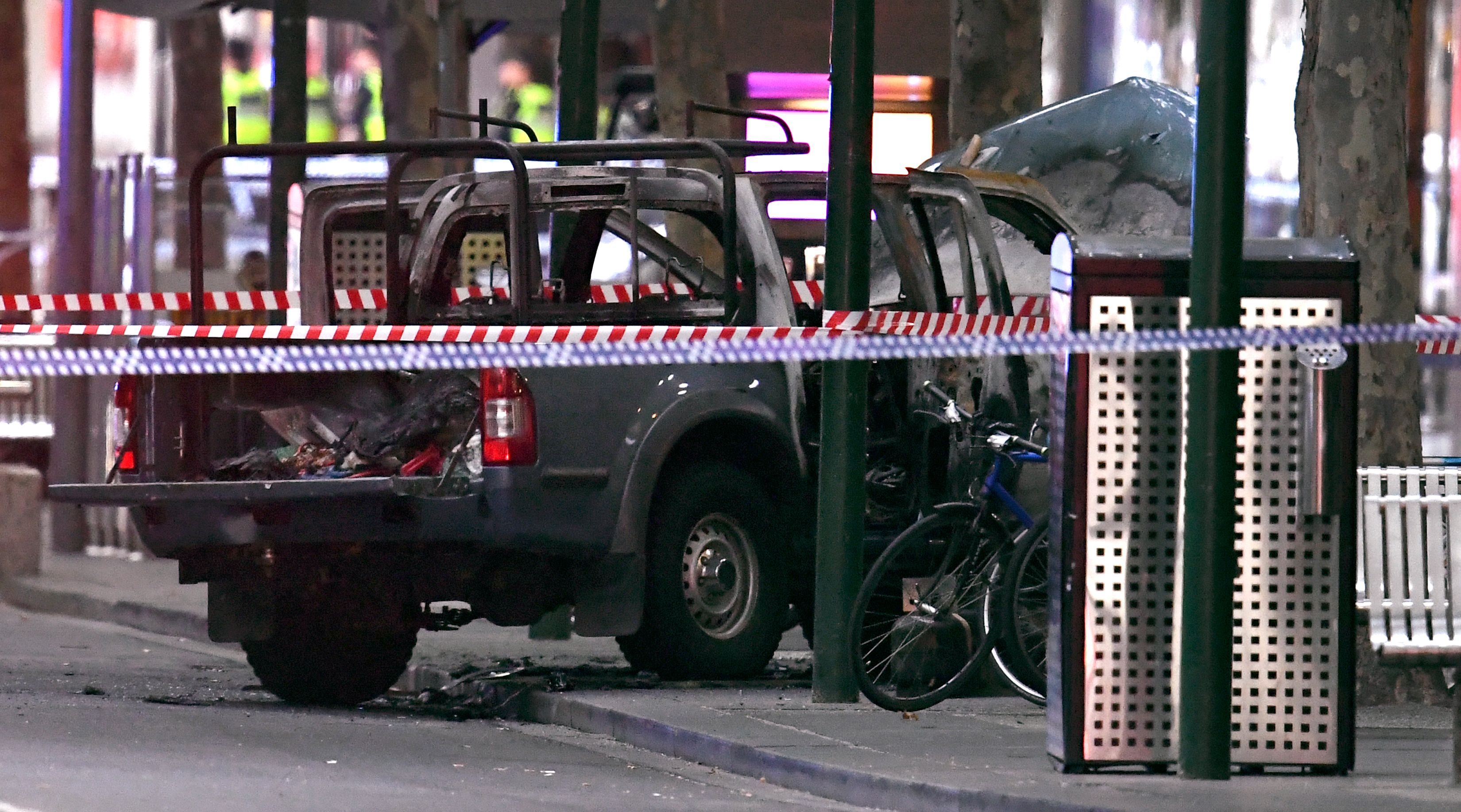 Officials also said they know the identity of the attacker, but would not disclose it for “operational reasons.”

Police said the man was known to them because of his family associations.

Two hours ago, via its Amaq Agency “news service” Islamic State claimed responsibility for the terrorist attack in #Melbourne Australia, advising the attack was perpetrated in response to IS’s calls for attacks (since 2014) against nationals of @coalition-member states. pic.twitter.com/qXBSkJaLLP

Video footage posted to Twitter shows the attacker attempting to stab officers before being shot as well as victims laying on the ground as the vehicle remains on fire down the street.

#UPDATE: Hundreds of police are on-scene on Bourke Street in Melbourne’s CBD after reports of a ‘serious incident’. #9News https://t.co/3LxsLzLDIk pic.twitter.com/XgtUbF9cwh

Authorities found what they described as “barbecue-style” bottles of gasoline in the vehicle, prompting them to call the bomb response unit, although the vehicle did not explode like a bomb would.

“That is something we might be able to talk more about tomorrow,” Ashton responded to reporters when asked if the attacker had recently traveled to Syria.

1
NFL Hall Of Fame Coach Criticizes CNN's Don Lemon For Claiming Jesus Was A Sinner
Media
2
'This Election Is Different': Tucker Carlson And Brit Hume Discuss The Likelihood Of A 'One-Party State'
Media
3
Millions In Coronavirus Relief Loans Went To Chinese Real Estate Company At Center Of FBI Bribery Probe
US
4
Trump Gets Really Bad News In Latest Poll
Politics
5
Here's What Colin Kaepernick Said About America Before He Got Benched
Analysis