MSNBC anchor Craig Melvin repeatedly mixed up a Marjory Stoneman Douglas graduate with his brother during a Friday interview, leading the graduate to call him out for his error.

Both Deitsch and Whitney are a part of the “March for Our Lives” movement and were brought on the network to discuss the mass shooting in Thousand Oaks, California.

As Mediaite first noted, Melvin mistakenly referred to Deitsch as a survivor of the shooting and later confused him with his brother, Ryan.

“Look, I was a graduate of Stoneman Douglas at the time of the shooting,” Deitsch corrected after Melvin called him a “survivor.” “My brother and sister had survived the mass shooting that happened there.”

Later in the interview, Melvin asserted that he and Deitsch had talked “a couple of weeks ago” on his program and played a clip from that alleged conversation. The clip, however, Melvin played was actually of Deitsch’s brother, Ryan. 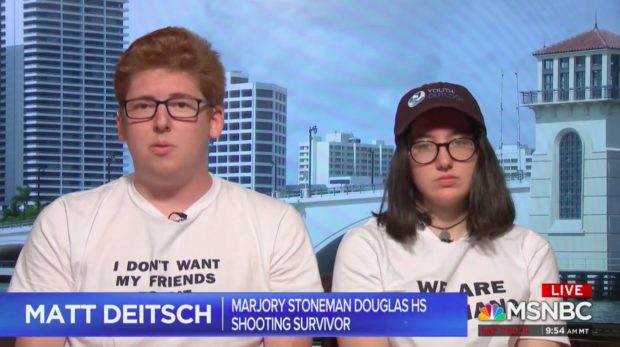 “That’s my brother,” Deitsch responded exasperatedly. “You call me a survivor. You play my brother as if it’s me — are you guys cool?”

“I apologize, Matt. That was a mistake. I apologize,” Melvin said as Deitsch and Whitney laughed at the awkward error.

Despite now having corrected Melvin twice, MSNBC still referred to Deitsch as a survivor in a chyron.

Melvin apologized again at the end of the interview, stating, “Again, my sincere apologies about the mistake there, guys.”