The 80th anniversary of Kristallnacht communicates a dire warning in the wake of the Pittsburgh synagogue shooting and a worldwide surge of modern anti-Semitism.

Kristallnacht, translated as the “Night of the Broken Glass,” refers to the broken windows of the thousands of synagogues, Jewish homes and Jewish businesses that Nazis ransacked and looted throughout Germany and Austria from Nov. 9 through 10 in 1938. Those two days, also known as the November Pogrom, marked the first time the Nazi party meted out violence against the Jewish people en masse — the beginning of what would prove to be the Nazis’ horrifying and brutal campaign against the Jewish people, Catholics, the handicapped, dissidents and other minorities, claiming the lives of up to 15 to 20 million people. (RELATED: 40,000 Jews Have Fled France In 10 Years Amid Rising Anti-Semitism) 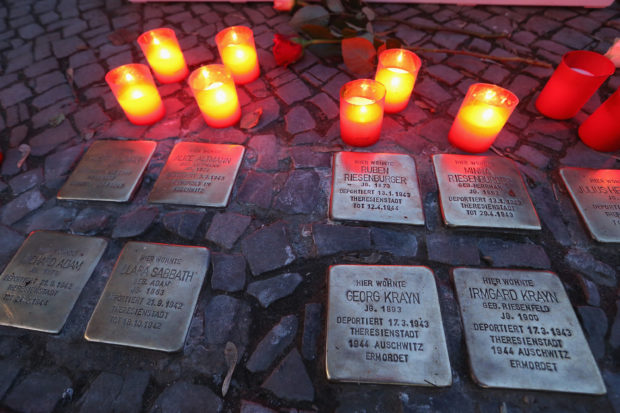 BERLIN, GERMANY – NOVEMBER 09: Candles placed at Stolpersteine by local people commemorating the 75th anniversary of the Kristallnacht pogroms cast light on the names of Jewish residents murdered in the Holocaust on November 9, 2013 in Berlin, Germany. Stolpersteine are concrete cobblestones afixed with brass plaques that memorialize local Jewish residents who were murdered or expelled by the Nazis. Events are taking place across Germany today and tomorrow to commemorate the day in 1938 when Nazi gangs across Germany and Austria burned down over 1,000 synagogues, smashed Jewish-owned businesses, looted Jewish residences and killed several hundred Jews. Anti-Semitism was a central component of Adolf Hitler’s rise to power and won him wide-spread sympathy among ordinary Germans and Austrians. (Photo by Sean Gallup/Getty Images)

Jewish people around the world commemorate the tragedy, honoring those who were victimized by the Nazis’ violent anti-Semitism and vowing to remember their plight lest it should be allowed to happen again. Here is what the Jews of Germany and Austria suffered on those two days 80 years ago.

German historians now prefer to avoid use of the term Kristallnacht, given the belief that Propaganda Minister Joseph Goebbels invented the name as a way of downplaying the violence and suffering that the Nazis caused over those two days.

The Nazis, for example, reported they destroyed 195 synagogues and killed 36 Jews, but Israeli scholar and holocaust survivor Meier Schwartz calculates the actual number of synagogues destroyed exceeds 1,400, and the dead numbered over 1,300. Those numbers do not include the hundreds of Jews who committed suicide immediately following the tragedy. That tragedy now goes by the name of the November Pogrom among German historians. 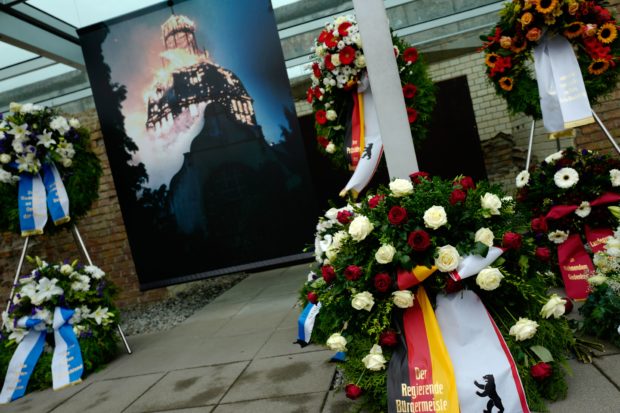 Wreathes are placed around a photo showing a synagogue in flames in Bielefeld on November 10, 1938, on display at the “Kristallnacht – Anti-Jewish Terror 1938” exhibition at the Topographie des Terrors museum in Berlin on November 9, 2018, the 80th anniversary of the Kristallnacht Nazi pogrom. – Germany remembers victims of the Nazi pogrom that heralded the start of the Third Reich’s drive to wipe out Jews, at a time when anti-Semitism is resurgent in the West. (JOHN MACDOUGALL/AFP/Getty Images)

In addition to destroying and looting Jewish places of worship, businesses and homes, the Nazis arrested 33,000 German-Jewish men and shipped them to the concentration camps of Buchenwald, Dachau and Sachsenhausen. The Nazis’ goal, according to historians, was to force Jews to flee Germany and Austria and take as few of their possessions with them as they could, so the Nazis could confiscate the wealth they left behind. Those selected for arrest were largely Jewish citizens whose property had not already been claimed by the state.

While Nazi authorities issued the order to Storm Troopers to carry out the violence, historians say regular German citizens also joined in the ransacking and looting on Nov. 10, or stood by and watched as the Nazis sent thousands of their fellow citizens to concentration camps days later.

“The circle of perpetrators expanded during the following day. In many localities, entire workforces of business enterprises mobilized to participate in the vandalism of Jewish homes and the desecration of synagogues. … Similarly, classes of schoolchildren were marched from their schools and let loose on Jewish targets, egged on by their teachers,” writes Prof. Alan Steinweis in Kristallnacht 1938.

The November Pogrom served as a violent turning point that paved the way toward the Nazis’ “Final Solution,” developed in 1942, which the world later came to know as the Holocaust.

The Importance Of Remembrance

Descendants of those who suffered the November Pogrom and the Holocaust say commemorations of the tragedy are imperative, especially in light of the recent Pittsburgh synagogue shooting, in which a gunman murdered 11 Jewish congregants, and a disturbing surge in anti-Semitic crimes in both the U.S. and European countries.

“It’s a terrible shock … for the Jewish community worldwide. And it shows once again that the ugly head of anti-Semitism can show itself anywhere in the world and we have to actively combat it,” said Rabbi Yehuda Teichtal of Berlin, concerning the Pittsburgh synagogue shooting, according to NBC News.

Teichtal led a group of Jewish students in lighting candles and reciting prayers Wednesday in Berlin, where Nazi leadership planned the Holocaust, to commemorate Kristallnacht and inspire students to preserve a peaceful future for their Jewish brethren.

“What better answer is there than that, in this very city, the students of the Jewish school from Berlin should jointly pray and light candles showing that the answer to darkness and the evil of the past is to create education for the present and the future,” Teichtal said. 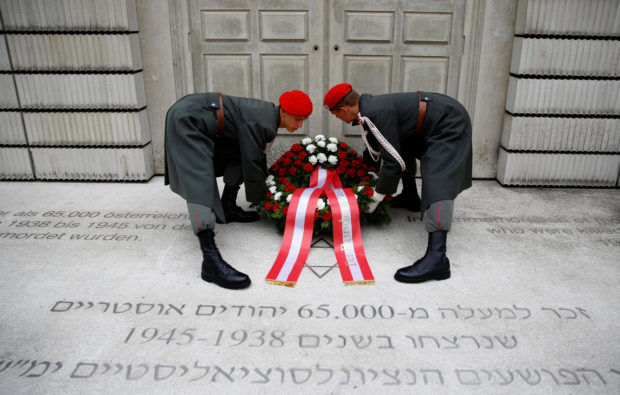 Members of the Austrian armed forces adjust a wreath during a ceremony to mark the 80th anniversary of Kristallnacht, also known as Night of Broken Glass, in front of the Holocaust Memorial in Vienna, Austria November 9, 2018. (REUTERS/Leonhard Foeger)

Jews in London are also commemorating Kristallnacht by leaving lights burning in their windows from Nov. 9 to 10. The anniversary of the event falls on the Jewish sabbath, for which Jewish law forbids the use of electricity among other things. To spread a message of hope on the anniversary of a tragedy, however, they are making an exception.

“At the NWES, we will be leaving the Friday evening prayer-room lights and memorial tree lights on,” Eli Ballon, administrator of New West End Synagogue (NWES), told BBC.

“We are also asking congregants to leave a light on overnight on Friday night in their homes to similarly remember this tragedy. May the only shattered glass we hear from this point forwards be the sound of glass breaking underfoot by grooms at their Jewish weddings,” he added.

People across the world from the U.S. and Europe to Israel will also commemorate Kristallnacht by keeping lights and memorial candles burning throughout the anniversary. 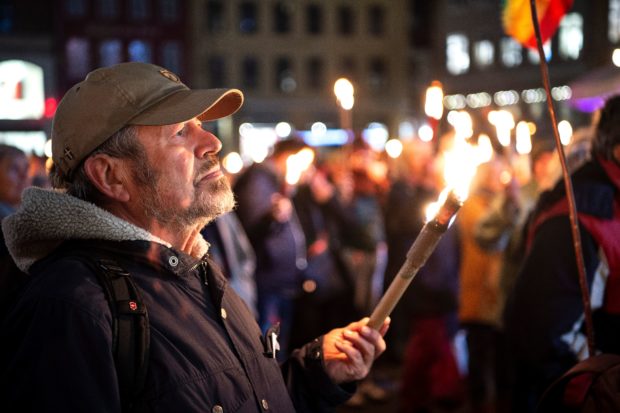 People take part in a candlelight vigil in Copenhagen on November 9, 2018 to commemorate the 80th anniversary of the Kristallnacht Nazi pogrom. – Denmark remembers victims of the Nazi pogrom that heralded the start of the Third Reich’s drive to wipe out Jews, at a time when anti-Semitism is resurgent in the West. (Photo by Nils Meilvang / Ritzau Scanpix / AFP) / Denmark OUT (NILS MEILVANG/AFP/Getty Images)

“I am doing it as a way to give my love and respect in remembrance to all the victims and their families of Kristallnacht,” said Thomas Lundmark from Skelleftea, Sweden. Lundmark will be keeping a candle lit in his window.

While commemorations of Kristallnacht speak of solemn remembrance and hope for the future, the anniversary also came with a dark warning from German Chancellor Angela Merkel, who Friday condemned the modern resurgence anti-Semitism. 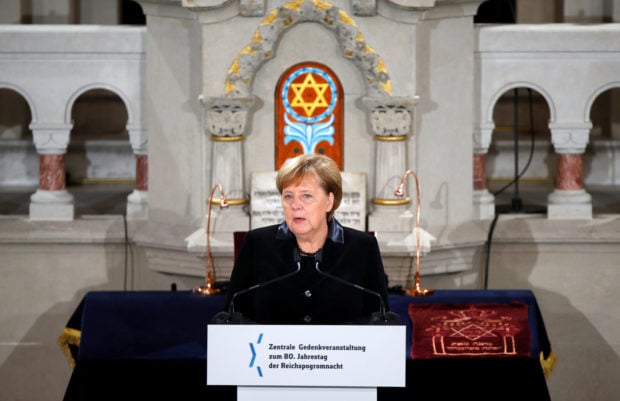 “If today, 80 years after these pogroms and 70 years after the formation of the Federal Republic of Germany, we look at the situation, we see an ambiguous picture: There is flourishing life, Jewish life, an unexpected gift after the Shoah,” Merkel said, according to CNN.

“But at the same time we see a worrying anti-Semitism. Which means Jewish life in this country, and in other places considered safe havens for the world, is threatened. This anti-Semitism has increasingly erupted into incitement of violence online and in public places,” she added.

Merkel urged Germans to preserve individual rights and democracy, saying that every person has a right to be recognized as an individual by the state and that democracies rely on a balance between majority and minority, and should therefore never be reduced to an “us vs. them” mentality.

“That is why today we remember and equally promise that we will be resolute in standing up against attacks to our pluralistic society,” she said. “We remember, while knowing that staying silent and not doing anything about it, ultimately, means joining in.”