MSNBC host Joy Reid on Saturday suggested that “race-based voting” could be responsible for Democratic voters who voted for Senator Bill Nelson but were “not comfortable” voting for Andrew Gillum further down the ticket.

Reid’s insinuation came while questioning Democratic Florida political strategist Steve Schale on the Broward County recount. After noting that the “sheer number” of Broward County votes was “pretty big,” Reid pointed out a “data point” in the county that “is strange to a lot of people.”

“The whole state had an undervote for governor,” Reid said. “What people don’t understand is the top of the ticket was really Bill Nelson, the U.S. Senator. Because the federal races get listed first on your ballot. So it would be the Senate race. If you have a House race, you get that next. Then you would see Andrew Gillum. There was an undervote across the state where people voted in the Senate race and not in the Governor’s race.”

Then, Reid attributed the “undervote” to “race-based voting.” 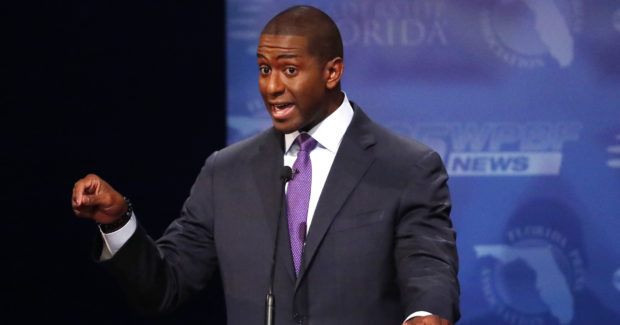 DAVIE, FL – OCTOBER 24: Democrat Andrew Gillum makes a point during his debate with Republican Ron DeSantis at Broward College October 24, 2018 in Davie, Florida. The second and final debate between the two Florida gubernatorial candidates was marked by sharp personal attacks as the November 6 election approaches. (Photo by Wilfredo Lee-Pool/Getty Images)

Reid asked Schale about why the “undervote was in reverse” only in Broward County, where “more people voted in the governor’s race than voted in the Senate race.”

Schale responded by citing the “question of whether or not people just missed the race or if there’s an issue with scanners.” (RELATED: RNC Points Out 12 Times Florida’s Broward County Elections Supervisor Has Been ‘Incompetent and Possibly Criminal’)

“This is why we have a recount,” he said. “Every one of these ballots will be inspected by hand.”