President Donald Trump blamed “poor” land management for the deadly wildfires consuming thousands of structures and more than 140,000 acres across California. The president also threatened to cut off federal payments if the problem isn’t fixed.

“There is no reason for these massive, deadly and costly forest fires in California except that forest management is so poor,” Trump tweeted Saturday morning. (RELATED: Here’s Everything You Need To Know About California’s Wildfires)

There is no reason for these massive, deadly and costly forest fires in California except that forest management is so poor. Billions of dollars are given each year, with so many lives lost, all because of gross mismanagement of the forests. Remedy now, or no more Fed payments!

The cost of firefighting has increased dramatically in recent years, hitting a record $1.1 billion in 2017. Trump recently signed “fire funding fix” legislation to give federal agencies $2.25 billion to fight fires starting in 2020. That amount would increase to nearly $3 billion by 2027.

Firefighters are working to contain three massive blazes, including the 100,000-acre Camp Fire in Butte County. The fire has taken at least nine lives, injured three firefighters and destroyed more than 6,000 buildings.

While the cause of the fire is unknown, CBS Sacramento reported Friday night that utility PG&E may be to blame for the deadly blaze. Earlier this year, state officials blamed PG&E power lines, conductors and power poles for 12 deadly Northern California fires that raged last year.

A structure is seen engulfed in flames during the Camp Fire in Paradise, California, U.S. November 8, 2018. REUTERS/Stephen Lam.

The origin of the Camp Fire is near Pulga road in the Plumas National Forest, which is managed by the U.S. Forest Service. Fire experts have been critical of federal and state forest management practices in recent decades as well as policies that make it harder to keep forests in check.

While Newsom and environmentalists tend to blame man-made global warming for the severe fires, Republicans and forestry experts say land management and population growth are the real driving factors.

Virtually all California wildfires are man-made, according to a recent study led by U.S. Geological Survey expert Jon Keeley. Keeley said the explosion of development into wildfire-prone areas is increasing the risks of ignitions from engines, power lines and lawnmowers.

Newsom, however, said he plans to improve state vegetation management practices and incorporate wildfire protection into urban planning. That could help limit fires in some areas, but much of the problem also stems from decades of forest mismanagement.

Fire crews contained about 20 percent of the Camp Fire as of Saturday morning, according to Cal Fire. Two smaller, though still devastating, fires are burning through Ventura County in Southern California. Persistently dry conditions and powerful Santa Ana winds allowed the fires to rapidly spread. 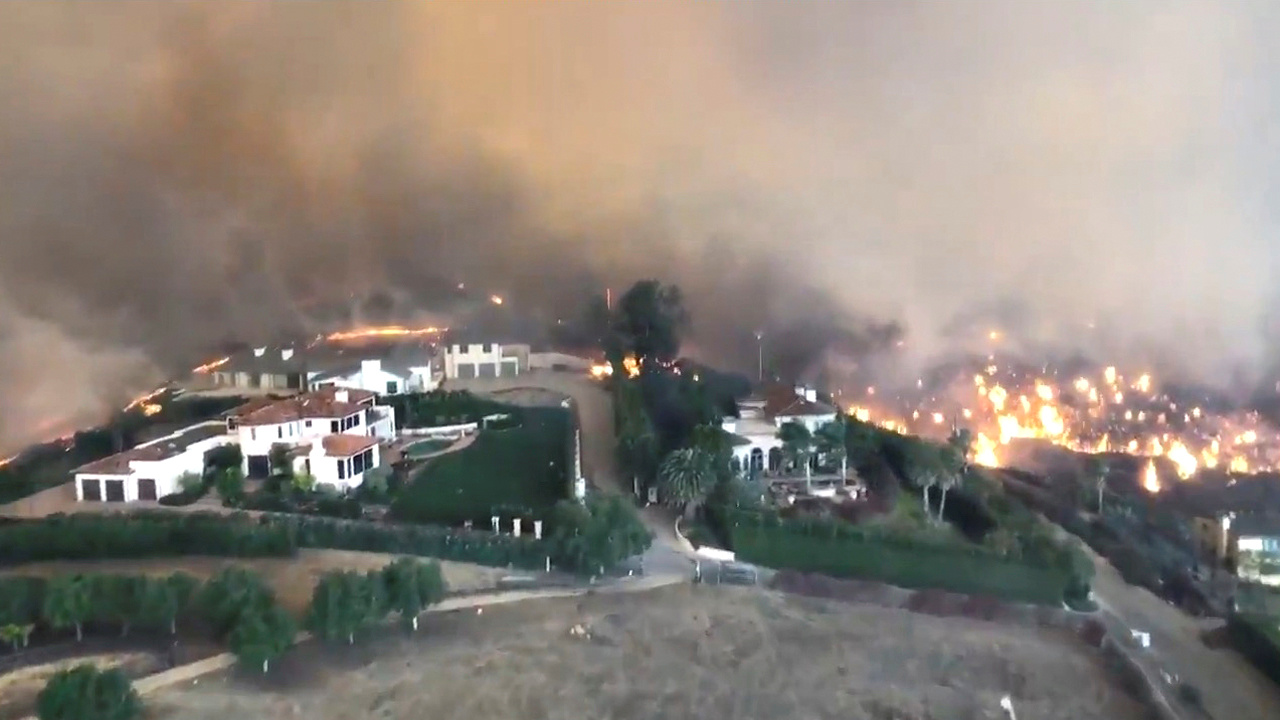 An aerial view showing the Woolsey Fire in Malibu, California, U.S. is seen in this still image obtained via from a November November 9, 2018 social media video. Michael Dubron/TWITTER @LACOFD via REUTERS.

The three fires have forced more than 250,000 people to evacuate their homes, including the roughly 30,000 residents of Paradise who saw their entire town “wiped out” in the deadly Camp Fire.

The 35,000-acre Woolsey Fire has forced thousands to evacuate, including residents of Malibu, the famous beach town. Celebrities have also been forced out of their homes as the fire spreads south.

VIDEO: @LACoFireAirOps Firehawk helicopter flying along Pacific Coast Highway in Malibu on the way to protect life and property. This is a historic event. Please follow the direction of local authorities. (Original video, ok to use with credit) @VCFD @LACoFD #WoolseyFire pic.twitter.com/SvZSfipzfk

Santa Ana winds are expected to continue to blow through Tuesday, according to the Los Angeles division of the National Weather Service. Gusts could be as high as 60 miles per hour over Malibu, further fanning the flames.