Chelsea Handler was spotted allegedly trying to trap drunk Eagles fans into saying dumb things ahead of the game against the Cowboys on Sunday night.

A tipster reportedly told the Philadelphia sports blog Crossing Broad that Handler was “baiting fans into interviews” in an effort to trap them into saying stupid things for her upcoming documentary about racial injustice. 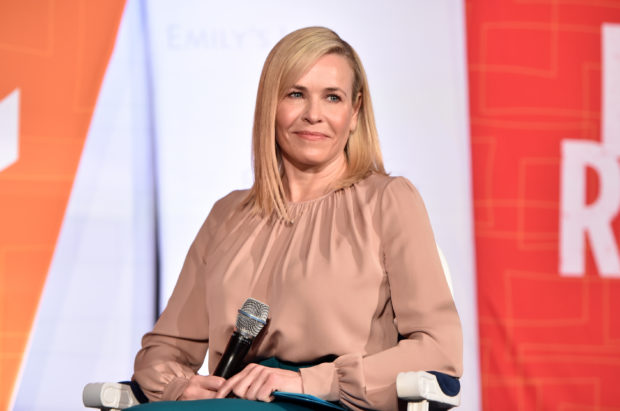 The tip reads, in full:

Chelsea Handler was at the eagles [sic] game tailgate yesterday. No one knew it was her at the time. She was baiting fans into interviews. For example, her video crew claimed they wanted to interview people about the super bowl win and the food that they were cooking. They did multiple shots of the grills and tailgate buses, then proceeded to interview people about the Super Bowl and general eagles [sic] questions. Out of nowhere during this interview, she turned the questions into our thoughts on Malcolm Jenkins protests, Kap kneeling and Black Lives Matter propaganda. The questions were purposely asked in a way [so] that no answer would be correct. Her producer set up people to get a reaction. For the interview, I was witnessing the guys being interviewed declined to answer the questions after they realized they were being set up. Some signed a waiver before this interview as they were told this was an “eagles [sic] fan documentary.” We watched her do this to multiple people yesterday in the tailgate lot. I don’t keep up with her but this 100 percent will be used in whatever she does these days. Just a heads-up to give you guys a chance to tell the real narrative of what really happened when this bullshit comes out and eagles fans are trashed by national media per usual.

No verified journalist has independently credited these claims, but several fans were tweeting and posting photos about Handler ahead of the game, too:

Yes was walking around Wells Fargo Lot. Doing a documentary for Netflix on social injustice.

Chelsea Handler is going to be tailgating at the eagles game today… and I’m crafting for a holiday meeting that is mandatory for me to attend… INSTEAD OF TRYING TO FIND HER AT THE TAILGATE.

I’m not exactly an expert in documentary-making, but I’m pretttttty sure interviewing drunk Eagles fans is not how you win over America and promote unity. Eagles fans have done some pretty stupid things over the past year.

It’s not like they’re at the Linc to improve their IQ scores. If we’re being frank, you probably don’t even have to “trap” an Eagles fan into saying something stupid. They just do it on their own.

And if I know Chelsea Handler, I know she’s almost certainly going to make dumb people look even dumber. Chelsea’s not exactly unfamiliar with stupidity.

Pray for the city of Philadelphia during this trying time. First, the Eagles are a dumpster fire this season — now this. Things are not looking good.