The Bobby Petrino Era at Louisville finally came to an end on Sunday when Louisville officially announced Petrino’s termination following a 2–8 start to the season.

The scroll of Bobby Petrino being fired came across during the airing of his Coaches’ show pic.twitter.com/lAWShlWwSV

Bobby Petrino’s character has always been a problem, but nobody has ever questioned his reputation as a winner. That is, until the last three years.

The last two years Louisville went 9–4 and 8–5, despite having Heisman Trophy winner Lamar Jackson at quarterback. Petrino and his staff completely wasted a transcendent player, going just 17–9 in his two years at a starter. This year, without Jackson to mask the program’s deficiencies, the bottom fell out and the Cardinals are likely headed to a 2–10 season.

When Petrino came back to Louisville in 2014, he talked about bringing a national championship to the school. He seemed eager to redeem himself after his tenure at Arkansas came to an end in embarrassing fashion.

By the end of his tenure, however, Petrino seemed to be only shell of himself who let the game of football pass him by years ago. While Petrino talked a big game in his initial press conference — speaking of championships on the field and his own personal redemption off of it — he could not turn that talk into action.

Louisville compromised their integrity to hire Petrino in 2014 because they thought he would turn them into a perennial contender on the national stage. Instead, Petrino leaves Louisville much worse off than he found it. At the bottom of the ACC, devoid of talent, setting up the next coach for a massive rebuilding job. 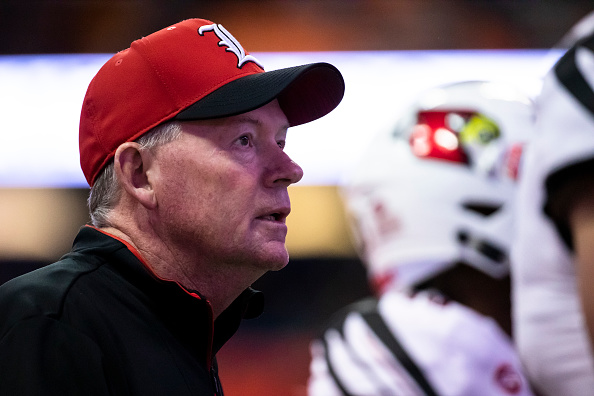 SYRACUSE, NY – NOVEMBER 09: Head coach Bobby Petrino of the Louisville Cardinals runs off the field before the game against the Syracuse Orange at the Carrier Dome on November 9, 2018 in Syracuse, New York. (Photo by Brett Carlsen/Getty Images)

It will cost Louisville $14 million to fire Petrino — a high price tag for a public university that traditionally focuses more of their resources on basketball.

Louisville had to let Petrino go.

His coaching abilities left him a long time ago.