Southern California had a tough week.

Between the Thousand Oaks shooting and wildfires ravaging over 70,000 acres of the Los Angeles suburbs, Californians need a little hope. (RELATED: Packers Fans May Have Just Crowned LA As The Worst Sports City In America) 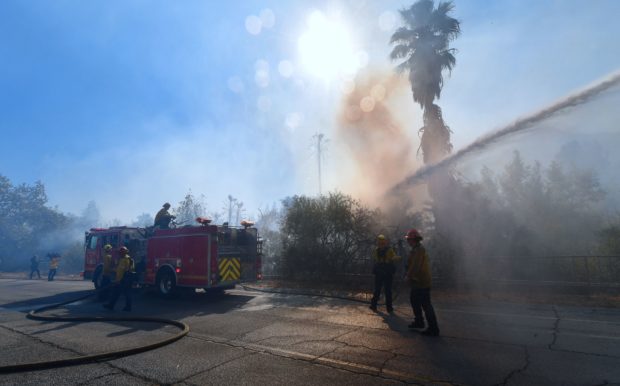 Water from a firetruck douses flames and smoke near homes in West Hills, California, on November 11, 2018, as firefighters continue their battle to control the Woolsey Fire. – Near Los Angeles, where the fire is threatening mansions and mobile homes alike in the coastal celebrity redoubt of Malibu, the death toll has so far been limited to two victims found in a vehicle on a private driveway. (Photo by Frederic J. BROWN / AFP) (Photo credit should read FREDERIC J. BROWN/AFP/Getty Images)

Which is exactly why the captains of the Los Angeles Rams are doing their part to help heal the area.

According to multiple reports following the Rams’ impressive win Sunday, captains Todd Gurley, Jared Goff, Michael Brockers, Andrew Whitworth and Johnny Hekker will be auctioning off their jerseys — with all proceeds going to benefit the victims of the California wildfires.

The #LARams captains are auctioning off their game worn jerseys in support of the Conejo Valley Victims Fund + @RedCross SoCal Wildfire Relief.

Each jersey is selling for way north of $300. As it stands now, the most expensive one is Todd Gurley’s, which is currently sitting at $3620 as of Monday morning.