CNN’s White House correspondent Jim Acosta opened up about having his press credentials revoked and the lawsuit he and CNN filed against the White House on Tuesday afternoon.

“The wrongful revocation of these credentials violates CNN and Acosta’s First Amendment rights of freedom of the press and their Fifth Amendment rights to due process,” CNN said in a statement announcing the lawsuit. 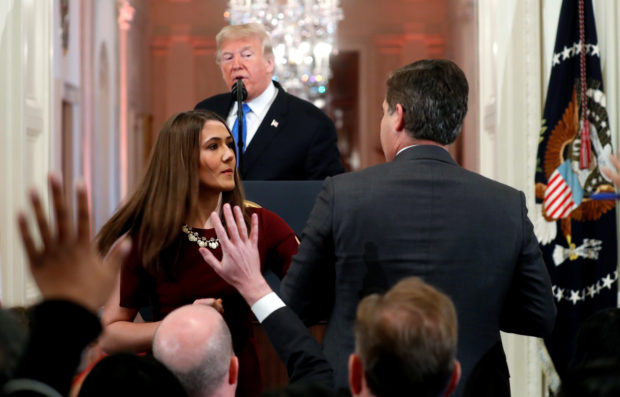 A White House staff member steps in to try to take the microphone away from CNN’s Jim Acosta as he questions U.S. President Donald Trump during a news conference following Tuesday’s midterm U.S. congressional elections at the White House in Washington, U.S., November 7, 2018. REUTERS/Kevin Lamarque

The suit is requesting the court issue an immediate restraining order requiring the pass be returned to Acosta. (RELATED: CNN Gets Several Things Wrong In Its Lawsuit Against The White House)

“I have always endeavored to conduct myself as a diligent but respectful reporter who asks probing but fair questions,” Acosta said in a statement. “The revocation of my White House press credential not only destroys my ability to perform my current job; it will follow me for the rest of my career. My reputation and my future career prospects have all been significantly harmed if not completely devastated.”

“This has frightened both me and my family and required us to take additional security measures in our daily lives,” he continued, adding that he and his family have been receiving death threats “regularly.” 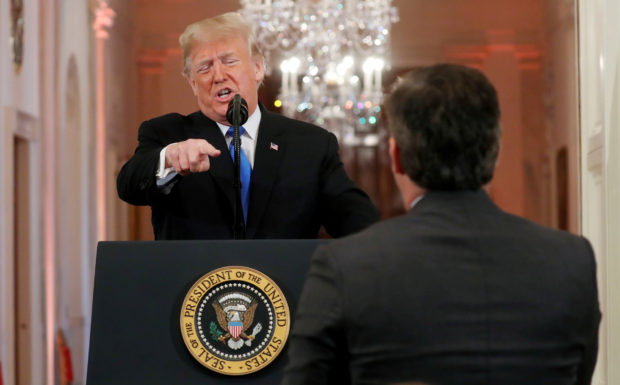 Acosta’s press credentials were revoked after a spat with Trump during his post-midterm election press conference last Wednesday.

The theatrics began when Acosta asked the president about his rhetoric on the migrant caravan. Trump shut him down and asked him to sit down. Acosta refused and continued asking questions. The president retaliated by verbally attacking both Acosta and CNN. As this was going on, a White House intern approached Acosta and tried to take the microphone from him, but he refused. (RELATED: Trump Accuses Reporter Of Asking ‘Racist’ Question)

Following the debacle, CNN condemned the president’s treatment of Acosta. Later that night, Sanders announced that his press credentials had Beene revoked for his behavior during the briefing.

After the announcement of the lawsuit on Tuesday, Sanders responded by saying, “This is just more grandstanding from CNN, and we will vigorously defend against this lawsuit.”

The White House Correspondents Association came out with a statement supporting Acosta filing the announcement of the lawsuit.

1
‘The Five’ Panel Explodes When Donna Brazile Claims There’s ‘No First Amendment Right To Lie’
Media
2
Cuomo Passes The Buck — ‘Obligation Is On The Nursing Home’ To Refuse His Order To Take COVID-19 Cases
Health
3
SHAFFER: The 6 Facts Americans Were Never Supposed To Know About The Russia Collusion Hoax
Opinion
4
Andrew Cuomo's Nursing Home Order Deleted From New York Health Department Website
Politics
5
'I SURE DID, F*CKER': Kathy Griffin Doubles Down On Hoping Trump Gets Stabbed With Potentially Fatal Air-Filled Syringe
US