A filmmaker embedded himself in the migrant caravan heading to the southern border and discussed what he found on Tuesday night with Tucker Carlson.

Ami Horowitz went to the southern Mexican state of Oaxaca to film the caravan.

“What we do know is this thing cost millions and millions of dollars. The mainstream media, and there are so many layers [of] onions to peel back, it’s hard to know where to begin. One of the lies the fake news if you will, media is trying to propagate is the fact that all this weird organic thing and all the water and the food and medicine, all dropped from … manna from heaven. It’s bologna. It’s all highly organized. It’s paid for by a number of organizations, we don’t know exactly where the money is coming from.”

New video! I went to Mexico and embedded with the migrant caravan. Check it out and see the truth about what is going on. @RealDeanCain @dbongino @therealroseanne @benshapiro @realDonaldTrump #MigrantCaravan #FoxNews #CNN #Immigration pic.twitter.com/vmvrJH20V7

“Why haven’t other news organizations gotten to the bottom of this? You’re one man, you’re doing this independently. Why isn’t NBC News or ABC or PBS, why aren’t they on this?” Carlson asked. (RELATED: DHS: More Than Half A Million People Arrested, Denied At Border In FY2018) 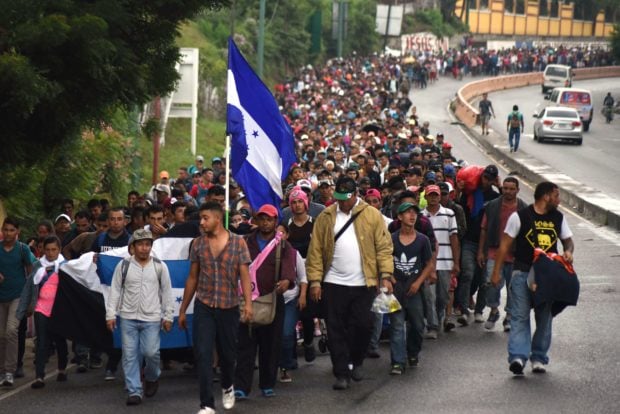 TOPSHOT – Honduran migrants take part in a caravan towards the United States in Chiquimula, Guatemala on October 17, 2018. (ORLANDO ESTRADA/AFP/Getty Images)

“You know the answer to that. They don’t want to get to the bottom of this. They have no interest politically in getting to the bottom of it. The same reason why, when you see a photo in The New York Times or The Washington Post or a video on CNN or the BBC or MSNBC. What do you see? The entire framing are women and children when the reality is so far from the truth, 90-95 percent of all the people in this caravan are men. Although I do apologize for assuming their gender,” Horowitz responded.

Earlier this month, President Donald Trump deployed troops to the border and suggested they should shoot people who threw rocks at them, but walked that comment back after facing backlash.