Inmates in California are being paid $1 dollar an hour to help combat the raging Camp Fire in Butte County that has already taken the lives of at least 40 people and is now being categorized as the deadliest fire in the state’s history, reported CNBC.

The California Department of Corrections and Rehabilitation (CDCR) has a volunteer program that pays inmates $2 daily and $1 hourly when fighting active fires. Inmates can also earn time off their sentences for participating.

Some 200 inmates are fighting the Camp Fire in northern region of California that has killed 42 people and left another 228 unaccounted for since its conception on Nov. 8, CNBC reported.

The inmates, who must be selected by the CDCR, assist firefighters in the physical labor involved with combating the wildfires, including cutting brush and trees, clearing and maintaining hiking trails and unclogging storm drains and flood channels.

“Each volunteer inmate is evaluated individually to ensure that all those selected for the camp program are willing to be team members with nonviolent behavior, even if their original conviction was for a violent crime,” CDCR representative Vicky Waters told CNBC. 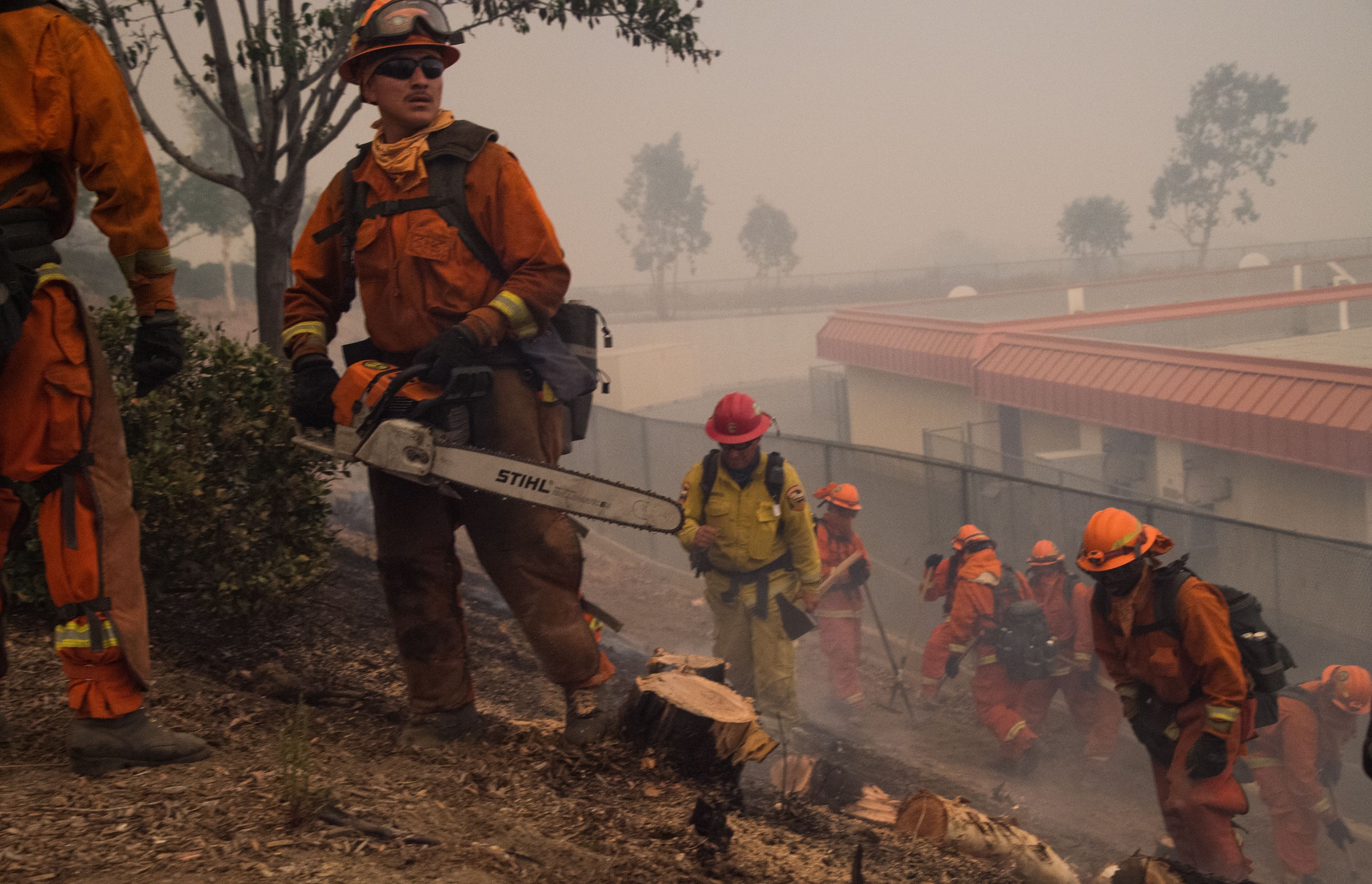 An inmate fire crew clears brush and puts out hotspots to protect an elementary school that almost caught fire at the Holy Fire in Lake Elsinore, California, southeast of Los Angeles, on August 9, 2018. – A man suspected of intentionally starting the Holy Fire on August 6 in the nearby Cleveland National Forest was charged August 9 with multiple felony counts involving arson. (Photo by Robyn Beck / AFP)

Inmates cannot volunteer if they’ve committed arson, sex crimes or if they have active warrants or medical issues. (RELATED: Senate Republicans Push Back Against Trump Over California Wildfire Comments)

The program can be traced back to 1915, and in August more than 2,000 inmates joined over 14,000 firefighters in combating the Mendocino Complex Fire, which was the state’s largest fire before the Camp Fire.

While critics argue the meager pay is not enough in turn for risking inmates’ lives, others argue that inmates are often very open to the opportunity to show their progress and growth.

CDCR says the program saves the state between $90 and $100 million a year, but it costs an average $70,812 per year to incarcerate inmates in California, according to the Legislative Analyst’s Office, a nonpartisan organization that provides the state legislature with fiscal and policy advice.

Under that expense is $2,437 that goes toward rehabilitation programs.

“That’s especially important when the work they’re doing is very dangerous, like fighting wildfires,” he warned.

Lisa Graybill, Deputy Legal Director at Southern Poverty Law Center, told Newsweek in August that inmates are sometimes so eager to demonstrate their rehabilitation that they’ll put themselves in risky positions, like fighting deadly wildfires.

“Many people who are incarcerated have families on the outside who are relying on them to come home and be their breadwinner again,” Graybill said. “If anything does happen to them, will there be provision for their families and will they be taken care of in any way?”