The NFL has decided to move next Monday night’s matchup between the Kansas City Chiefs and the Los Angeles Rams from a stadium in Mexico City back to L.A.

“Monday night’s Chiefs-Rams game now is being moved from Mexico City to Los Angeles due to poor field conditions in Estadio Azteca, per sources. Back to LA for the Rams, who have been training for altitude in Colorado Springs,” ESPN’s Adam Shefter tweeted Tuesday. (RELATED: Here’s A Glorious Video Of Matthew Stafford Throwing 56 Touchdowns To Calvin Johnson) 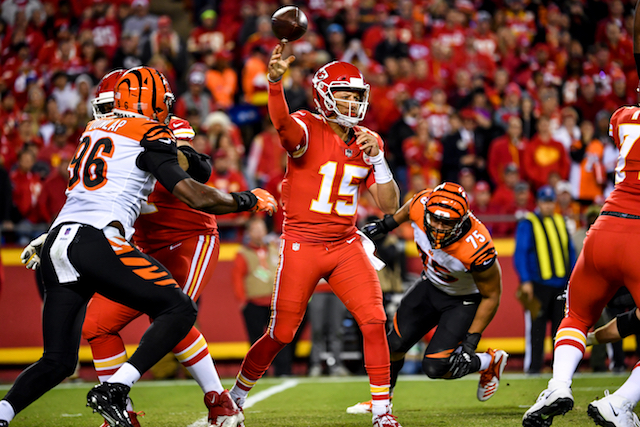 Patrick Mahomes #15 of the Kansas City Chiefs throws a pass during the first quarter of the game against the Cincinnati Bengals at Arrowhead Stadium on October 21, 2018 in Kansas City, Kansas. (Photo by Peter Aiken/Getty Images)

The game between the high-scoring Chiefs and Rams will now be played at the Los Angeles Memorial Coliseum. The move comes following concerns raised over the state of the field at Aztec Stadium due to several events and a ton of rain in the area.

A statement from the National Football League read that after meeting with the league’s player association and field experts the playing field “does not meet NFL standards for playability and consistency and will not meet those standards by next Monday.”

Here is the full release on the #Rams–#Chiefs game in Mexico being moved to LA pic.twitter.com/vMxVEeuqOB

“We have worked extensively with our partners at Estadio Azteca for months in preparation for this game,” NFL Executive Vice President of International Mark Waller. “Until very recently, we had no major concerns. But, the combination of a difficult rainy season and a heavy multi-event calendar of events at the stadium, have resulted in significant damage to the field that presents unnecessary risks to player safety and makes it unsuitable to host an NFL game.”

“As a result, we have determined that moving the game is the right decision, and one that we needed to announce now in order to allow our teams and fans to make alternate arrangements,” he added.

Amid concerns over grass, NFL to make final decision on game in Mexico City today https://t.co/FyazJk0Xes

Ahead of the league’s decision, unnamed players were reportedly “strongly considering” not playing in the game over the state of the field, according to Shefter.

If Monday night’s game is played in Mexico City, a number of Rams and Chiefs players are now strongly considering not playing in that game on that messy surface, per sources. “It’s not fair to risk our health,” one prominent player said today.

The Rams and Chiefs both sit with 9-1 records with the over/under on sports betting set at 64, the highest it’s been in more than thirty years.