Republican Sen. Marco Rubio of Florida took President Donald Trump’s side Tuesday amid a spat with French President Emmanuel Macron over the implications of nationalism, saying Macron “got it almost exactly backward” when he said nationalism is the opposite of patriotism.

“Mr. Macron may have intended a dig at President Trump’s embrace of the word ‘nationalist,’ but instead he drew a clear contrast between his view and America’s,” Rubio wrote in an op-ed for The Wall Street Journal.

Macron appeared to take a jab at Trump overseas in a Sunday speech commemorating the 100th anniversary of Armistice Day in Paris, saying, “Patriotism is the exact opposite of nationalism,” a clear reference to Trump’s “I’m a nationalist” comment he made at a rally on Oct. 22.

“Nationalism is a betrayal of patriotism by saying, ‘our interest first, who cares about the others?'” The French president continued to say, with Trump standing not far away.

Rubio pointed out where he believes Macron is wrong.

“American nationalism is opposed to the kind of detached rationality Mr. Macron described,” he wrote.

“What makes America exceptional is that our values are built into our national identity. While we have never been completely true to our founding ideas, for more than two centuries each generation has fought and succeeded to move us closer to them,” the op-ed reads.

Trump received his share of negative responses to his claim as a nationalist, with several in the media suggesting the president’s comments could be construed as “coded language” to Americans holding racist ideologies and emboldening white nationalists.

“President Trump is right to embrace the label ‘nationalist,’ because a true American nationalism isn’t about a national identity based on race, religion or ethnicity,” Rubio defended.

Macron said in his speech that Trump’s embrace of nationalism suggest he holds “no regard for others.”

“By putting our own interests first, with no regard for others, we erase the very thing that a nation holds dearest, and the thing that keeps it alive: its moral values,” Macron said, a sentiment Rubio responded to firmly. 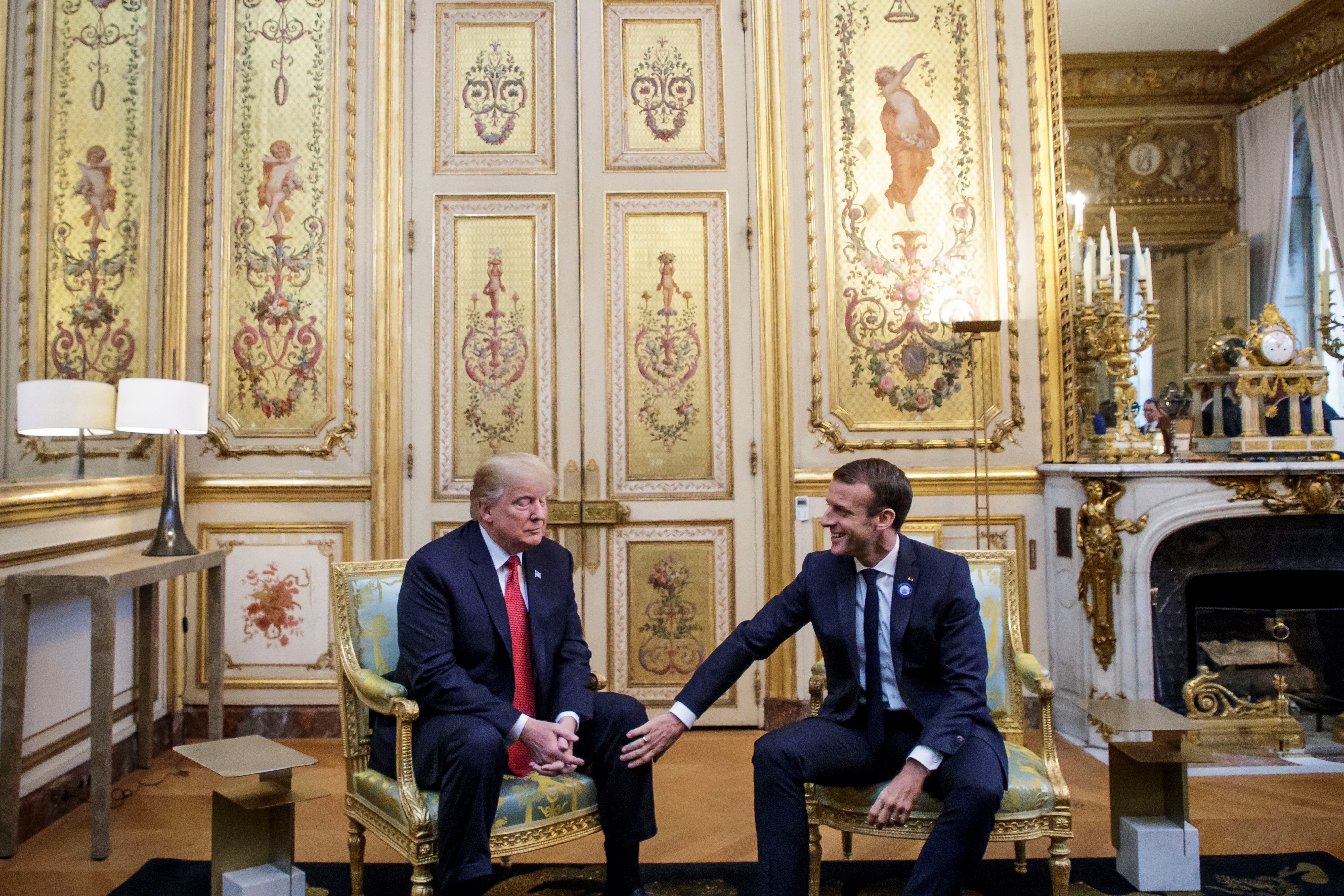 US President Donald Trump (L) speaks with French president Emmanuel Macron prior to their meeting at the Elysee Palace in Paris on November 10, 2018, on the sidelines of commemorations marking the 100th anniversary of the 11 November 1918 armistice, ending World War I. (Photo by Christophe Petit-Tesson / POOL / AFP)

“That might sound nice, but Mr. Macron got it almost exactly backward,” Rubio responded. “It is through the nation that moral values can be upheld and sustained. In America, our ideals are deeply intertwined with our national traditions and institutions.”

“By the way, there is no country more Nationalist than France, very proud people-and rightfully so!” Trump wrote.

The problem is that Emmanuel suffers from a very low Approval Rating in France, 26%, and an unemployment rate of almost 10%. He was just trying to get onto another subject. By the way, there is no country more Nationalist than France, very proud people-and rightfully so!……..

The French government continued the back and forth Wednesday, saying Trump should have shown some “decency” on the third anniversary of the 2015 Paris terrorist attacks, referring to his Tuesday Twitter tirade.

“Yesterday was Nov 13, we were commemorating the murder of 130 of our people,” French government spokesman Benjamin Griveaux told Reuters, adding, “so I’ll reply in English: ‘common decency’ would have been appropriate.”