Speaking on the Senate floor on Wednesday, Flake stated, “I have informed the majority leader I will not vote to advance any of the 21 judicial nominees pending in the Judiciary Committee or vote to confirm the 32 judges awaiting confirmation on the Senate floor until … [the bill] is brought to the full Senate for a vote.” (RELATED: Trump Taps Indian Daughter Of Immigrants For Kavanaugh’s Seat On The D.C. Circuit)

This was in response to Senate Majority Leader Mitch McConnell blocking Flake’s request to bring legislation to protect Mueller to the floor.

Sanders appeared on CNN’s “The Lead With Jake Tapper” alongside David Urban and Ryan Lizza.

“Now that’s not an idle threat, Symone, because let me point out, Jeff Flake, if he votes against any of the 32 judges that come before the Senate floor, that makes it 50-50 and Mike Pence gets to be a tiebreaker, but that’s still ugly that Pence has to do it,” Tapper began. “But, more importantly, the 21 judicial nominees who haven’t been reported out of committee, Republicans only have a one-vote advantage in that committee. If Jeff Flake refuses to vote for any of them, that means they don’t get reported out of committee.”

“Is this what you’ve been begging for Jeff Flake to do?” Tapper asked directing the question to Sanders. 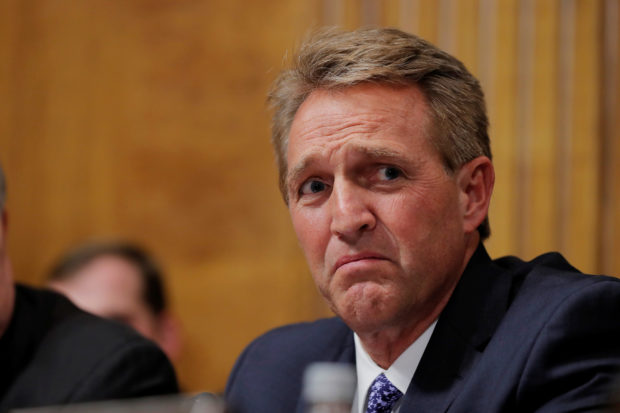 Sanders responded, “I’ve been — Jeff Flake, thank you! Why did it take so long? Maybe because Jeff Flake is on his way out.”