President Donald Trump cracked a joke about the criminal justice reform bill he is supporting being a “bipartisan” effort during a press conference on Wednesday afternoon.

The bill Trump supports is titled The First Step Act, which has already passed through the U.S. House of Representatives 360–59 and is currently in the Senate. It addresses both sentencing and prison reform.

“Thank you, Bob. Great job. Senators Lindsey Graham, Mike Lee, Tim Scott, Rand Paul and Doug Collins. Fantastic people who have worked so hard and we appreciate very much what you have done,” Trump stated. “I really do. Thank you all very much.”

The president continued, “Working together with my administration over the last two years, these members have reached a bipartisan agreement … Did I hear the word ‘bipartisan?'”

Laughter broke out throughout the room and it was followed by a round of applause. 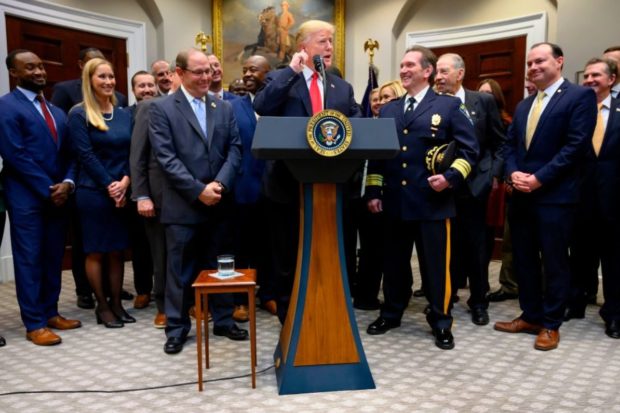 He continued, “Did I hear that word? That’s a nice word. Bipartisan agreement on prison reform legislation known as the first step. And that’s what it is. It’s a first step, but it’s a very big first step.”

According to the website dedicated to the First Step Act, it is “bipartisan criminal justice legislation moving through the U.S. Senate. If passed, it would transform the federal Bureau of Prisons and hold the DOJ accountable for improving the lives of  200k currently incarcerated men and women.”