Tucker Carlson criticized CNN during his show on Wednesday night, arguing that the network was only defending free speech because it was “their speech.” CNN filed a lawsuit against the Trump administration earlier in the week claiming the White House had violated Jim Acosta’s first and fifth amendment rights.

Acosta asked Trump about his rhetoric on the migrant caravan. Trump shut him down and asked him to sit down. Acosta refused and continued talking. The president retaliated by verbally attacking both Acosta and CNN. As all this was going on, a White House intern approached Acosta and tried to take the microphone from him. (RELATED: Trump Accuses Reporter Of Asking ‘Racist’ Question)

That night, White House press secretary Sarah Huckabee Sanders announced that Acosta’s press credentials would be revoked. CNN filed a lawsuit to get it back on Tuesday.

“In the past couple of days, you have heard a lot of huffing and puffing about free speech and freedom of the press, and how those freedoms are currently imperiled by the White House. To be clear, we are for free speech, unfettered, absolute free speech. The kind of speech guaranteed by the First Amendment and ratified consistently by the Supreme Court,” Carlson began.

He continued, “We’ve defended that kind of free speech almost every night here for the past two years. Many others, mostly on the left, have attacked speech. So we know who is for free speech and who is against it, and we cannot help but notice that some of free speech’s greatest enemies are now posing as its defenders, all of a sudden.”

“Take CNN, for example. It was a CNN that almost single-handedly led the campaign to have a broadcaster Alex Jones banished from the Internet, on the grounds that they didn’t like what Jones had to say. Ultimately, CNN succeeded in doing that. The network convinced every major tech platform to ban Jones and his outlet, InfoWars. You don’t have to like Alex Jones to see that as a terrifying loss for free speech, because it was exactly that,” Carlson stated. 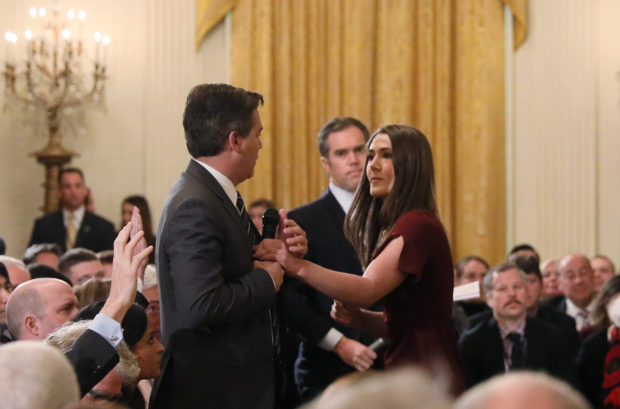 “But CNN was not done trying to silence its critics. Last year, the cable network threatened an anonymous Reddit user for creating an anti-CNN meme. CNN threatened to expose his identity and ruin his life if it ever was criticized by him again,” he added. “Now CNN is claiming to defend free speech, only when it is their speech. You will notice, by the way, CNN did not object when the government threatened to imprison employees of the cable channel RT if they didn’t register as foreign agents.” (RELATED: Tucker Points Out Hypocrisy Of The Russia Narrative With Adam Schiff’s RT Appearance)