The U.S. Food and Drug Administration (FDA) declared a crackdown on underage e-cigarette use with the announcement of proposals to limit sales of e-cigarette flavors Thursday.

The FDA will also set in motion a possible ban on menthol cigarettes, which opponents view as gateways to nicotine addiction because they are less harsh than traditional cigarettes, FDA commissioner Scott Gottlieb said in a press release Thursday.

Rumors of the policies flared up earlier in November but were confirmed Thursday by the agency, which is being more restrictive in its approach to fruit and dessert-flavored e-cigarette pods than originally anticipated, reported NBC News. The FDA wants to restrict the sales of the fruit and dessert e-cigarette flavors that it says attract teen users to age-restricted stores and websites.

Mint, tobacco and menthol e-cigarette flavors would not be affected, according to the FDA. (RELATED: Juul Temporarily Stops Selling Flavored E-Cigarette Pods As FDA Tries To Limit Underage Usage)

“Today, we advance our efforts to combat youth access and appeal with a policy framework that firmly and directly addresses the core of the epidemic — flavors,” Gottlieb wrote in the press release Thursday. “The policies I’m outlining now strives to strike a careful public health balance between our imperative to enable the opportunities to transition to non-combustible products to be available for adults; and our solemn mandate to make nicotine products less accessible and less appealing to children.” 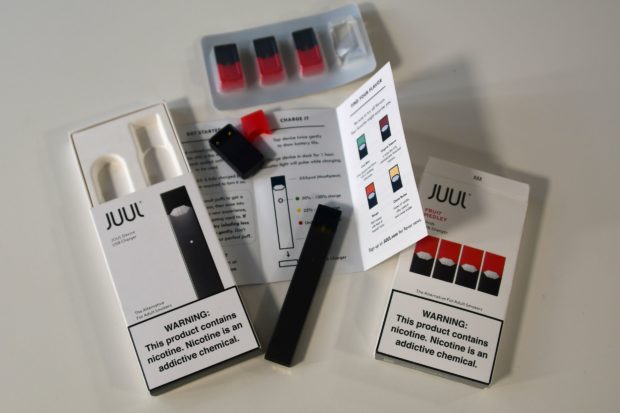 One company name that has continuously surfaced throughout the FDA’s deliberation over teen nicotine addiction is Juul.

“Commissioner Gottlieb has made it clear that ‘preventing youth initiation on nicotine is a paramount imperative.’ As we said earlier in the week, the numbers tell us underage use of e-cigarette products is a problem that requires immediate action. That is why we implemented our action plan. We are committed to working with FDA, state Attorneys General, local municipalities, and community organizations as a transparent and responsible partner in this effort,” Juul Labs told The Daily Caller News Foundation in a statement Thursday.

If the policies Gottlieb wants go through, individuals who want to buy e-cigarette flavors like mango or creme brulee will have to go to stores that only serve customers 18 years or older, or visit websites with age-verification measures.

“The data show that kids using e-cigarettes are going to be more likely to try combustible cigarettes later,” Gottlieb wrote. “Almost all adult smokers started smoking when they were kids. Nearly 90 percent started smoking before the age of 18, and 95 percent by age 21. Only about 1 percent of cigarette smokers begin at age 26 or older.”

The American Lung Association, a tobacco industry opponent, applauded the FDA’s announcement, but encouraged the agency to be more restrictive.

“It is clear that unless FDA fully enforces the law and acts to eliminate all loopholes, the tobacco industry will shift its strategy and find new ways to target and attract youth,” ALA president and CEO Harold P. Wimmer said in a statement Thursday. “We cannot simply trust the tobacco companies to voluntarily do what’s right: the only way to address this public health crisis is for the FDA to remove all flavored tobacco products from the market.”

“Our intent was never to have youth use Juul,” Juul chief executive Kevin Burns said in a statement before the FDA’s official announcement, according to The New York Times. “But intent is not enough. The numbers are what matter and the numbers tell us underage use of e-cigarettes is a problem.”

Juul has more than two-thirds of the U.S. e-cigarette market.

The FDA fines some retailers that sell e-cigarette products and accessories to minors, according to TheNYT. The FDA even launched a “blitz” against 40 retailers to crack down on illicit sales in April.