Audience members responded in shock when someone reportedly shouted “Heil Hitler! Heil Trump!” during the intermission of “Fiddler on the Roof” in Baltimore.

Baltimore Sun contributing sportswriter Rich Scherr was in the audience, according to the outlet, and he posted a video of the audience’s confusion immediately following the outburst.

Sick, sad world. A man stands at intermission of tonight’s performance of Fiddler in Baltimore and yells, “Heil Hitler,” along with pro-Trump references. pic.twitter.com/slDcPwF7re

Scherr gave a statement to his home paper, saying, “People started running. I’ll be honest, I was waiting to hear a gunshot. I thought, ‘Here we go.'”

The person who caused the disruption was quickly escorted from the theatre, but Scherr said the remainder of the performance — about a Jewish family in Russia who faces persecution from the Tsars — was lost on him. “My heart was just racing. I didn’t even really pay attention to the second act.” 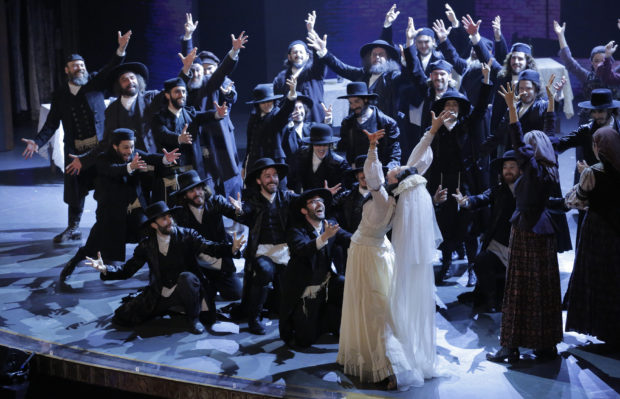 MSNBC’s Chris Hayes implied that the person responsible for the outburst had been motivated and empowered by President Donald Trump, tweeting sarcastically, “I swear it’s the strangest thing the way Nazis and racists and bigots of all stripes invoke the name of the President as an expression of their evil.”

I swear it’s the strangest thing the way Nazis and racists and bigots of all stripes invoke the name of the President as an expression of their evil. (I am kidding. It is not strange.) https://t.co/QhUBW2GBxg

He followed up with another tweet tying the president to the promotion and fostering of racism and bigotry. (RELATED: Parody Ad Sticks It To Media: 72-Second Supercut Of Pundits Calling Trump A Nazi)

Baltimore police have not yet released a statement regarding the incident. It is not clear if the perpetrator is some sort of lunatic Nazi sympathizer, or a left-winger trying to mock Trump and his supporters.