Tucker Carlson aired a clip of Hillary Clinton in 2016, criticizing then-candidate Donald Trump for allegedly claiming that things were “rigged” whenever they did not go his way — and Carlson then showed Clinton doing the same thing for Georgia gubernatorial candidate Stacey Abrams on Thursday night.

“The race for governor of Georgia was tight for months, you probably followed it. But it finished in the end pretty much exactly where the polls predicted it would finish. The Republican, Brian Kemp, defeated the Democrat Stacey Abrams by about one and a half percentage points. In a big state that’s an awful lot of votes. For reasons she hasn’t really explained though, Stacey Abrams has refused to accept those results. Her allies are now claiming the election was stolen,” Carlson began.

“If she’d had a fair election, she already would have won,” Clinton said on Tuesday while speaking at the LBJ School of Public Affairs of the University of Texas.

He continued, “That’s election fraud. It’s a serious charge and it’s telling that nobody making that charge has provided any evidence that it actually happened, no detail at all. Most remarkable of all though is that Hillary Clinton is one of the voices in this course. We keep track and we remember Hillary’s view just two years ago. Here’s what she thought of losing candidates who claim the  election was rigged.” 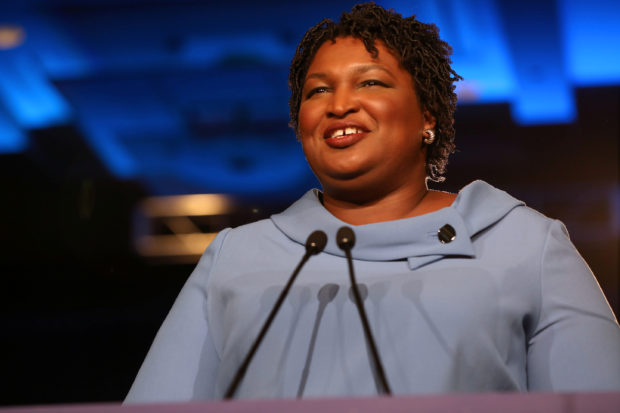 Stacey Abrams speaks to the crowd of supporters announcing they will wait till the morning for results of the mid-terms election at the Hyatt Regency in Atlanta, Georgia, U.S. November 7, 2018. REUTERS/Lawrence Bryant

The show then aired a clip of Hillary Clinton from a presidential debate back in October, 2016.

In the video, she said, “Every time Donald thinks things are not going in his direction, he claims whatever it is is rigged against him. That is not the way our democracy works. We’ve been around for 240 years. We’ve had free and fair elections. We’ve accepted the outcomes when we may not have liked them. He is a denigrating, he’s talking down our democracy. And I for one, am appalled.”