Chinese authorities reportedly took an underground bishop who refused to join the communist party-controlled state church into custody, despite the Vatican’s recent capitulations to Beijing.

Police seized Bishop Peter Shao Zhumin on the morning of Nov. 9 and are keeping him for a period of interrogation and indoctrination that authorities call a “vacation period,” reported a Catholic news service. Zhumin was officially appointed as a bishop by the Holy See, but serves in a Catholic community that is not officially recognized by the Chinese government as they refuse to join the state-sanctioned church under the control of the Chinese Communist Party. (RELATED: Vatican’s Deal With Communist China Spells ‘Annihilation’ For Chinese Church, Cardinal Zen Says)

Zhumin will allegedly be kept for “10 or 15 days” during which authorities will try to force Zhumin to submit to registration with China’s Patriotic Association, which would mean membership with a church that is technically independent from Rome.

Zhumin remains loyal to the Holy See, for which police have kidnapped and attempted to indoctrinate him at least five times over the past two years, according to AsiaNews, and last kidnapped him in May 2017, releasing him after seven months.

The kidnapping of Zhumin comes amid the backdrop of the Vatican’s negotiated deal with China, which supporters of China’s underground churches called a betrayal of the true Catholic faithful in the country. The Vatican acquiesced to China’s demand to recognize eight excommunicated bishops, formerly unrecognized by the official Catholic church, who were appointed by China’s communist government, without securing China’s recognition of several underground bishops.

According to the Sino-Vatican deal, all of China’s Catholics are officially in communion with the church, and while the Vatican will put forward candidates for bishops, Beijing will have the power to reject candidates. While the Vatican has capitulated to China’s demands, Beijing has not made any compromises, sparking outrage from Catholic leaders like Cardinal Jospeh Zen, the former bishop of Hong Kong. 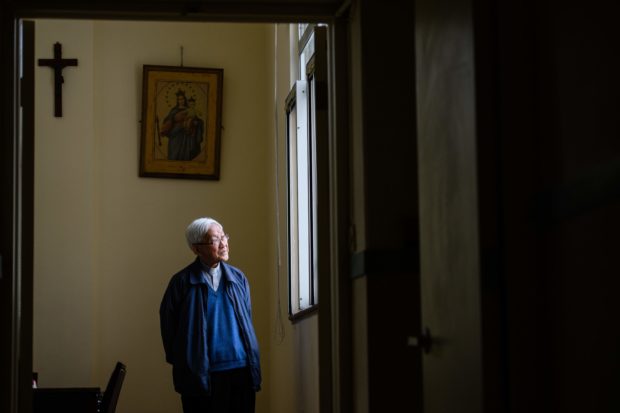 Hong Kong Cardinal Joseph Zen has earned a reputation as a fighter — the octogenarian’s latest battle pits him against Vatican officials and Beijing over a deal he believes would devastate the Catholic Church.( ANTHONY WALLACE/AFP/Getty Images)

“The deal is a major step toward the annihilation of the real Church in China,” Zen said.

Religious scholars said the resulting deal actually weakened the Holy See’s authority in China and ceded more power to Beijing, which has continued to crack down on unregistered churches and implement severe regulations on religious practices.