President Donald Trump doubled-down on his call for better forest management while surveying wildfire damage in northern California with Gov. Jerry Brown and other officials.

“Other countries do it differently. It’s a whole different story,” Trump said Saturday, mentioning that Finland manages forests by “raking and cleaning things, and they don’t have any problem.”

Trump arrived in California earlier that day. As Trump’s motorcade entered Paradise, the sides of the road were filled with onlookers trying to catch a glimpse of the president while wearing masks to filter out the smoke that hung heavy in the air, CNN reported. Those gathered held up American flags and first responders saluted as Trump’s motorcade passed.

“Hopefully this is going to be the last of these because this was a really, really bad one,” Trump said surveying the damage in Paradise. “Right now, we want to take care of the people who have been so badly hurt.”

“Nobody would have ever thought this could happen,” Trump said, standing in the remains of a mobile home park in the town. (RELATED: As California Burns, Jerry Brown Takes Heat For Vetoing 2016 Wildfire Mitigation Bill)

Incredible to be with our GREAT HEROES today in California. We will always be with you! pic.twitter.com/B1MCTF83Zf

At least 76 people died in the Camp Fire, according to state officials, and more than 1,200 people are still unaccounted for. 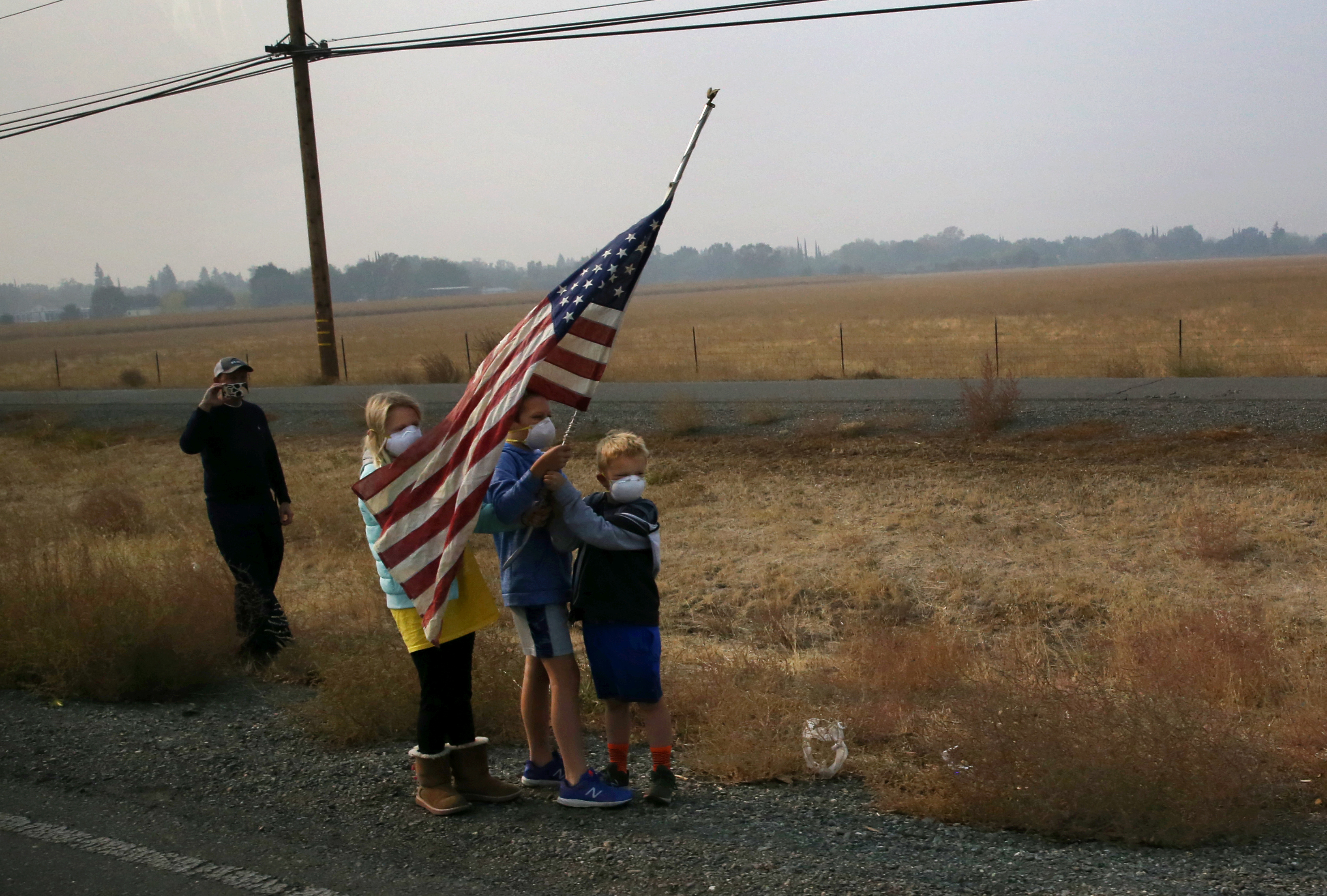 Children hold up an American flag while wearing masks to protect them from smoke as the motorcade of U.S. President Donald Trump passes by after he visited a neighborhood recently destroyed by the Camp fire in Paradise, California, U.S., November 17, 2018. REUTERS/ Leah Millis.

“Right now, we want to take care of the people who have been so badly hurt,” Trump said. “This is very sad to see. As far as the lives are concerned, nobody knows quite yet.”

Trump also stopped in southern California, where he surveyed damage wrought by the 98,000-acre Woolsey Fire and met with the families of victims of a deadly shooting at the Borderline Bar & Grill in Thousand Oaks that killed 12, USA Today reported.

“We just hugged them and we kissed them — and everybody. And it was very warm,” Trump said. “It was tragic, and yet in one way it was a very beautiful moment.”

Shortly after the blazes broke out, Trump blamed “poor” forest management in California for the fires. Brown shot back by saying “those who deny” global warming were contributing to the fires. 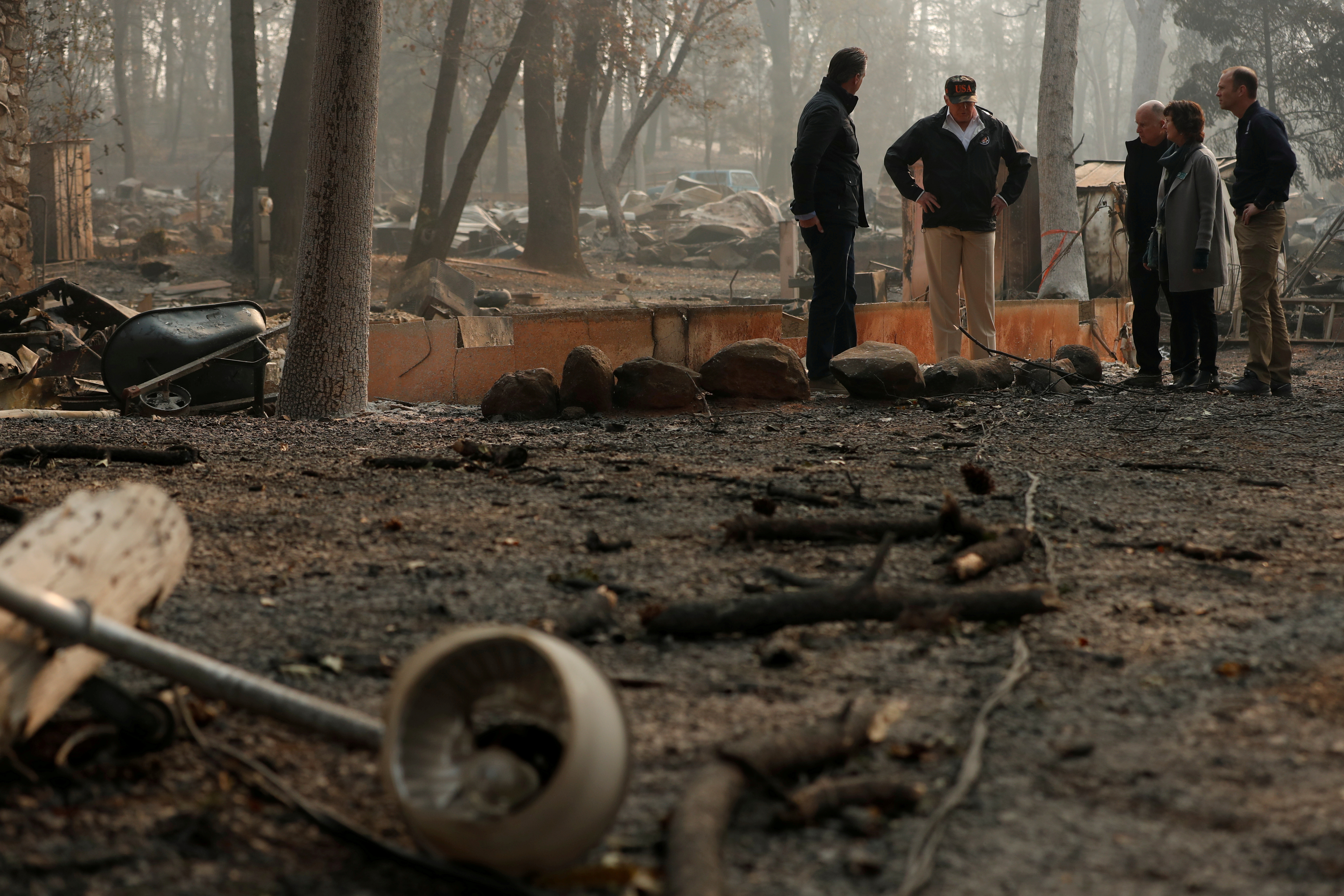 Global warming’s role in wildfires is hotly debated, and most wildfire experts look at factors like fuel build up and population growth. Experts say decades of poor land management practices have led to an accumulation of debris, dead trees, shrubs and other things that ignite in California’s hot, dry weather.

“We have the management factor that I know Jerry has really been up on and very well, and Gavin is going to, we’re going to be looking at that together,” Trump told reporters Saturday.

A reporter also pressed Trump on whether or not the fires changed his opinion of man-made global warming. Trump said they did not.

“Every year we go through this. We’re going to have safe forests and that’s happening as we speak,” Trump said in response to the reporter’s global warming question.