A GRAY SOFA IN WASHINGTON, D.C. — Is it ironic that Brian Stelter begins his program doing what he says he loathes in our president? He gloats. He bloviates. He’s bloated in his own delight in talking about how unhinged President Trump allegedly is.

“Could all this be about a direct result of midterm losses, CNN’s win in court and the ongoing Mueller probe?” Brian asks.

“How should the press try to report on a president’s mind?” The host asks in his best Sarah Jessica Parker “Sex and the City” Carrie Bradshaw voice, lifting both his hands to his ears and balding noggin to emphasize his point that he’s referring to brain matter.

To answer that psychological question, we wildly turn to to Carl Bernstein, who is not being patched in from the Hamptons this week. No, today, he’s in Manhattan with a coffee cup and a silky blue pocket scarf sitting right next to Brian, who reminds viewers of Bernstein’s bonafides: he’s part of the famous Woodward and Bernstein duo.

You have to love the brainpower that comes with this program.

Bernstein says Trump no longer bulwark of the Republican Party. He says if you talk to Republicans on Capitol Hill, they think he could bring down the party, they worry about Robert Mueller’s investigation and they worry about his STATE OF MIND.

“There is a new kind of under-rumbling about Donald Trump, his mood, his unhinged, uh, actions and words in the past couple weeks,” he says. “…You have to look at the Mueller investigation where those around him are saying look, his back may be to the wall.”

Bernstein says the midterms have shaken Republican leaders “to their core.”

He surmises that Republican mindset is this: “We can’t be following this Pied Piper everywhere.”

Brian runs clips of Trump commenting on the California forest fires and is at his wits end with details he says are factually untrue. “I’m not sure we should broadcast it on television right now,” he says.

He wants advice from his TV poppy — Bernstein.

“Donald’s Trump’s lying and his pathology about lying and what it means to have a President of the United States who lies as no president in our history has ….  That is one story. …What we have going on is a larger problem of how we cover this president.”

(I’m trying to condense Bernstein’s commentary into more manageable clumps of words so you don’t lose your minds.)

At this point, Bernstein praises the “very good lawsuit” that CNN filed against Trump’s White House to ensure fair treatment of all reporters — particularly Jim Acosta, who got his press pass back after the White House alleged that he put his hands on an intern and then rendered him impotent by swiping his credentials. If only Bernstein could sing his answers, this show would be so much more entertaining.

Bernstein wants the media to come up with some OTHER way of covering the president. His  idea is this: Don’t Cover Him Live.

“Because of Trump’s lying…we need to start thinking of a different way of covering his press conferences and briefings. …I don’t think we should be taking them live and pasting them up on the air because they are basically propagandist exercises. …How can we cover them differently? Maybe we should be there, edit, decide as reporters what is news, rather than treating the press conference or briefing as a campaign event.”

His point: All of what Trump says will be transcribed and placed on CNN’s website. But not all of what the president says would air on TV. We can’t just give the president a microphone, he says.

Brian moves on to blowing up CNN’s big win in court with Acosta getting his press pass back.

But don’t get too happy. At the moment, the host warns darkly, the win is temporary.

The lawyers will be back in court Monday to iron out more logistics. 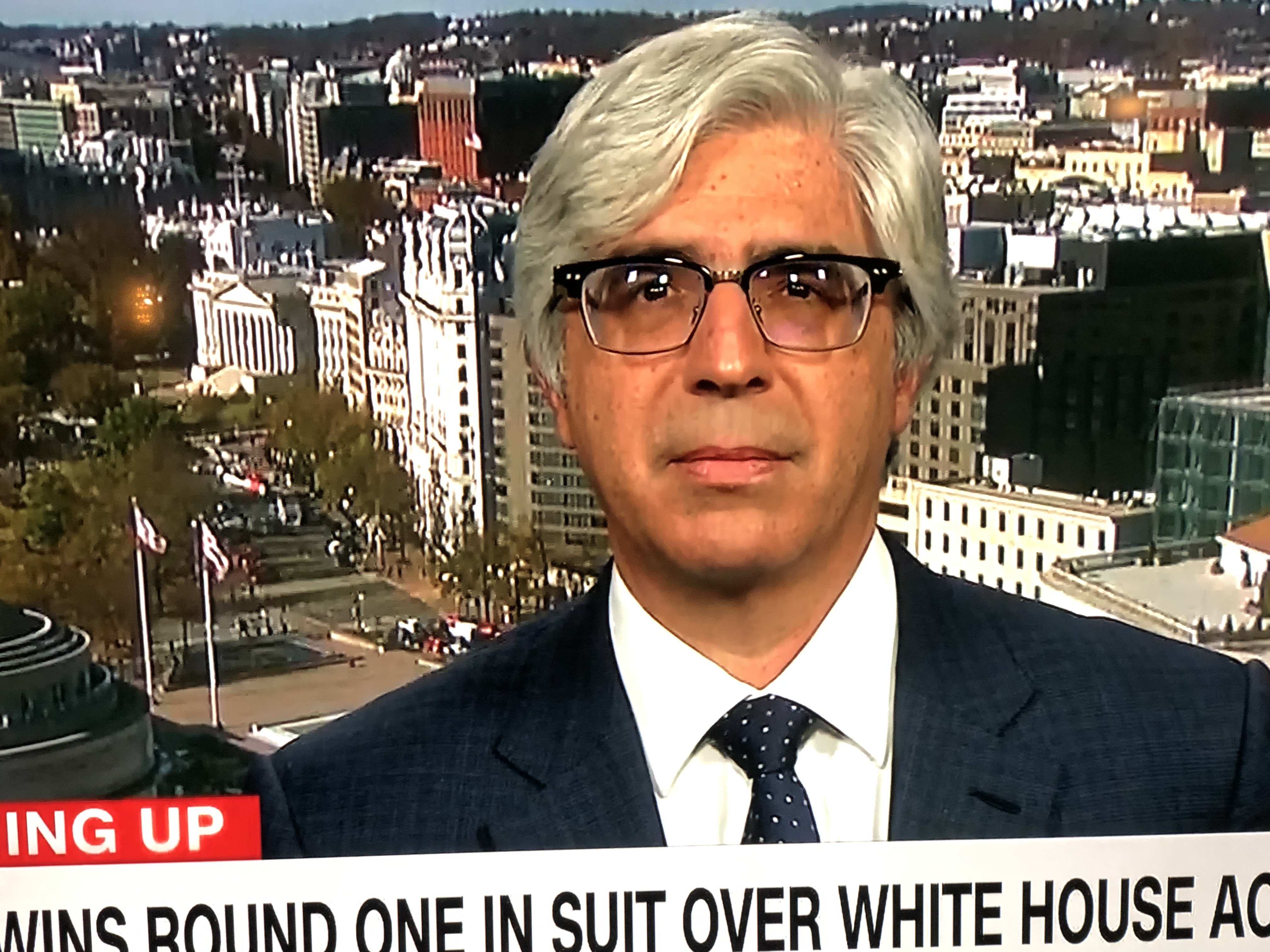 CNN’s lawyer Ted Boutrous is on the show.

“Mr. Acosta is going to keep doing his job,” he said, noting that he and the reporter shared a quick hug in court after the victory.

I don’t find this touching, but maybe I’m missing something.

Asked if this could settle out of court, Boutrous, who has extremely silky, beautiful, silver fox hair, replied, “This is an unpredictable White House as you know. …There needs to be advanced rules. …CNN and Mr. Acosta didn’t want to have to bring a lawsuit. We wanted to work this out. …But they forced our hand.”

Speaking of Mr. Acosta, why isn’t he on the show? That would make sense. But no, apparently Acosta can’t speak for Acosta on the network’s media program.

Boutrous keeps the glass half full. “I think it’ll all work out,” he says. “Maybe everyone can move forward with aggressive news coverage and a lot of press conferences.”

But the lawyer says he’s ready to litigate as long as CNN has to.

“You look for the resolution that makes the most sense,” he said. “We are just glad we got this temporary order and we’re ready for anything else that comes down the pike. …It made me feel really good as a lawyer and as a citizen to right the ship. …It was a very good day for our constitution.”

Bernstein’s back for more TV action.

Brian plays a clip of Trump being rude to a variety of reporters — black, white, female and male.

“You are watching the rageaholic president,” Bernstein says. He wades into a lot of unnecessary, boring blather.

Bernstein says Trump has issues with the truth — he says he makes untruths the “fundament” of his presidency —  which is a ridiculously common theme in a lot of pubs. (Blah blah blah blah blah.) It’s so absurdly common that it seems like a waste for Bernstein to expel any energy saying it.

Seriously, is he telling viewers anything we don’t already know?

The reporter who helped crack Watergate says hopefully the so-called White House rules of decorum will be made in collaboration with the press. And exactly no one believes that this will ever happen.

So White House Press Sec. Sarah Huckabee Sanders is going to have a slumber party with American Urban Radio’s April Ryan and CNN’s Acosta and develop rules of decorum?

Brian plays a clip of former Gov. Mike Huckabee interviewing his daughter, Sarah, on Fox News. Sarah says if CNN can’t send a reporter who can behave like an adult, maybe they should send somebody else.

Chris Ruddy, CEO of Newsmax Media, Inc., is up next. Surrounded by water, CNN is patching him in from Boca Raton. He is not smiling.

While he says Acosta’s questions are “way over the line,” he says pulling his credentials is “overreach.” He opposes the White House’s actions toward CNN.

His opinion that Acosta’s questions are “too obnoxious” to be asked is bullshit.

The White House pointedly calls on Acosta for maximum drama. They know what they’re getting when they call on him — so whatever fault he’s placing on Acosta should also land on Trump and the White House press office. Trump despises a boring press conference. Of course he’s calling on Acosta.

And then, kind of a gross statement from a “journalist”:

“I’m a friend of [Trump’s], but I disagree with this move,” Ruddy says, noting that the president enjoys higher ratings than the media.

Ruddy says there’s an unfair lack of accountability on the media because members of the media aren’t elected officials. What this means I have no idea — he thinks reporters should be “elected” to their jobs? He complains that CNN doesn’t cover the “good parts.”

Brian shakes his head a lot and tries to push back.

Ruddy argues that Trump has put in “tremendous” work in bolstering the military — “if he misses a ceremony or two, I’m not so concerned about that.

Brian says they’ll have to agree to disagree.

Neither man appears to possess enough specific details to effectively argue the point. They part ways without any visible vitriol.

Don’t get too excited. But Brian actually has a decent story on Sunday’s program. He interviews David Little, editor the Enterprise-Record, a local paper near burned down Paradise, Calif. in Chico.

He said they had employees missing for two or three days and 10 employees lost their homes. All employees have been located. It’s a shame Brian doesn’t also have these reporters on his program.

“I’ve been so focused on getting the product out everyday,” Little says. “…I felt a little frustration yesterday — all the national media was here and it was just for the presidential visit. …I just wish the focus was more on the recovery and less on the politics.”

Little says the twice weekly Paradise Post has nowhere to deliver in the town of Paradise, so it’s being delivered to evacuation centers.

Brian wants to know if Little is planning to bring in mental health professionals in case employees have PTSD.

“We break down and cry for our neighbors and it’s hard,” Little says. “We definitely need to examine that.”

And for this week, that’s a wrap.