A U.S. drug company hiked the price of its opioid overdose treatment over 600 percent since going to market in 2014, but the number of prescriptions filled for the drug skyrocketed.

Now the link between the drug’s price jump and drugmaker Kaleo’s ability to rake in cash from Medicare and other entities has been detailed in a Senate subcommittee investigation released Sunday evening.

But Evzio is different for two reasons. The first is that the injector is extremely easy to use. It even talks users through the injection process. The second is because of how much it costs — as of November, two injectors of Evzio cost approximately $4,100, according to the subcommittee report. (RELATED: Over 91,000 Pounds Of Raw Turkey Recalled By This Brand Because Of Salmonella Concerns)

That’s compared to the $125 price tag for two doses of Narcan, a nasal spray that also contains naloxone.

The subcommittee report on Evzio centers on the arrival of consultant Todd Smith at Kaleo. 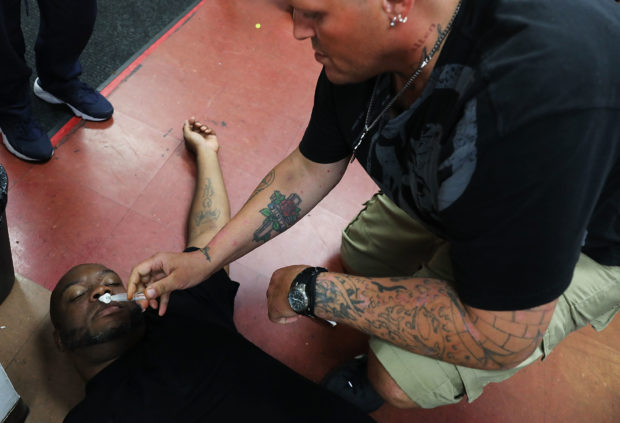 Doctors typically prescribe Evzio when a patient is on prescription opioid painkillers as a safety precaution. Only 4,769 prescriptions of the treatment were filled in the year leading up to June 2015, according to the report. By January 2017, after an Evzio price hike that Smith recommended went through, Kaleo could boast 66,237 prescriptions filled in the past year.

Smith came up with a “scheme” to raise both Evzio’s price and prescription fill count without making patients pay a penny, according to the report. But insurance companies, Medicare and ultimately taxpayers ended up with the bill, reported CBS News.

“Naloxone is a critically important overdose reversal drug that our first responders have used to save tens of thousands of lives,” Republican Ohio Sen. Rob Portman, who chairs the subcommittee, said in a statement Sunday. “The fact that one company dramatically raised the price of its naloxone drug and cost taxpayers tens of millions of dollars in increased drug costs, all during a national opioid crisis no less, is simply outrageous.”

When insurance companies agreed to pay full price for Evzio, it could cover co-pays and even full drug costs for patients whose insurance companies didn’t cover the treatment. It costs Kaleo roughly $174 to make Evzio, according to Portman’s office.

But much of Evzio’s moneymaking came from Medicare. Before Smith arrived, doctors had to work to get Medicare and Medicaid to cover Evzio for patients because there were much cheaper options available. But Kaleo contracted with pharmacies to take care of paperwork defining Evzio as “medically necessary,” making prescribing the treatment a breeze for doctors. 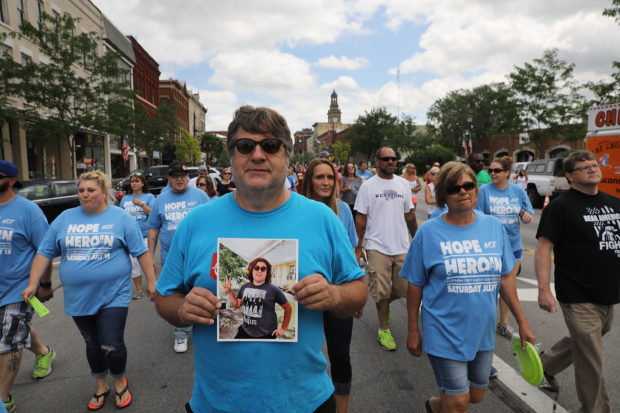 Barry Bova holds a picture of his son Brad, who died of a heroin overdose, while marching through the streets of Norwalk against the epidemic of heroin on July 14, 2017 in Norwalk, Ohio. Spencer Platt/Getty Images

That investment paid off big for Kaleo. Only 24 percent of Evzio units sold went to Medicare and Medicaid patients in 2017’s first quarter, but those units made up nearly 75 percent of net sales ($7.94 million) of Evzio, according to the subcommittee report. Figures for commercial plans were nearly the inverse. In fact, Medicare paid an average of $3,522 per unit while commercial plans paid $367, according to the report.

“It raises — the overall health care cost for everybody. You and I, paying our premiums, are the ones paying for it,” an unnamed former Kaleo employee told CBS News.

Meanwhile, Smith’s consulting firm raked in more than $10 million over approximately two years. The payment rate “was based on revenue generated by the new distribution model,” according to the report.

Now Kaleo is floating returning to a price even lower than Evzio’s original price point of $575.

“We want to reach out to all middlemen, all insurance companies to say, ‘We will lower this price to less than the original $575 if you will make sure that when a physician decides a patient is at risk, they can get it and they can afford it,'” CEO Williamson said on “60 Minutes” Sunday.

Kaleo released the following statement in response to negative coverage:

We have recently been the subject of negative attention over the price of our drug, EVZIO. Obviously, we are disappointed with the way in which some of the facts are being presented and believe there is much more to this very complex story.  However, our commitment and intention remain simple – we aspire to make a meaningful difference in patients’ lives. We believe two facts are critical to the EVZIO story.  First, we have received voluntary reports from recipients of donated product that EVZIO has saved more than 5,500 lives since we launched the product in 2014. Second, we have never turned an annual profit on the sale of EVZIO. Patients, not profits, have driven our actions.

News of Kaleo’s pricing scheme comes after the Centers for Disease Control and Prevention (CDC) estimated the U.S. had the most drug overdose deaths ever — approximately 72,000 — in 2017.

Naloxone, Evzio’s active ingredient, can reverse potentially fatal overdoses of both legal and illegal opioids. U.S. Surgeon General Dr. Jerome Adams called for all Americans, not just first responders, to carry a form of naloxone with them at all times to save lives in April.