Like other women’s shotguns, the Blaser F16 Intuition, in both the Sporting and Game models, has a stock that uniquely accommodates the female anatomy.

The raised Monte Carlo stock of the Blaser F16 Intution.

The raised Monte Carlo stock is in consideration of women’s higher cheek bones and longer necks – decreasing recoil to the face while perfecting eye/target alignment. The stock’s reduced pitch angle adapts to the breast area, again for lower felt recoil. A shorter length presents superior trigger control while at the same time helping with smooth low-gun mounts. I also found the ergonomics between pistol grip and trigger – designed for a woman’s smaller hands – to be effective in making successful shots. Overall, Blaser’s goal with the F16 Intuition was to enhance comfort, recoil management and control dynamics for women compared with the standard models measured for men.

When it was introduced in July 2016, the Blaser F16 gave wing and clays shooters entrée into the Blaser shotgun universe that had been dominated by the innovative F3, which had cost nearly twice as much. 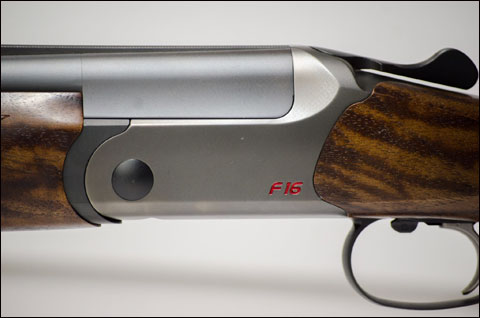 The modern receiver of the women’s Blaser F16 Intuition over/under.

The F16 receiver, at 60mm tall, managed to keep the shotgun’s profile 1mm lower than the streamlined F3. It has to do with so-called bifurcated underlug locking mechanisms and the reduction from two cocking rods in the F3 to a single one in the F16.

For handling, the F16 receiver has rounded bottom edges (a semi-round body) for better feel in the hand. It measures 42mm across, up 2mm from the F3. Blaser says that the low center of gravity and wide beam deliver extra stability, which I experienced.

Specifications for the Blaser F16 Intuition Sporting and Game models.

The Blaser F16 is the kind of over/under with the potential to make you look competent compared to other women’s shotguns festooned with feminine adornments or candy-cane pink. For example, how many times have a seen a woman with a new break-open shotgun struggle to close it? This problem is usually explained away as “the gun needs to break in.” In reality, the issue is inconsistent quality control. Why should a woman spend $3,000 for a shotgun that’s embarrassingly difficult to close (or open)? If men want to fight that battle, good for them, but women should certainly be spared and possibly be encouraged to purchase a semi-auto.

In the case of the Blaser F16 Intution, as a new shotgun it’s certainly easier to open compared to other new over/unders. (And the quality control paid off with a shotgun that was also very easy to open.) You don’t have to make excuses for it.

The Blaser F16 Intuition is configured for a woman shooter.

The F16’s Ejection Ball System (originally developed for the F3) cocks the F16’s ejectors only when the shot is fired, relaxing spring tension after ejecting the hulls. That means you don’t have to force the shotgun closed. In the field, the Ejection Ball System contributed to a stress-free shooting experience that contributes to higher confidence for women wing and clay enthusiasts.

The Blaser F16 Intuition that I received didn’t have the optional stock or barrel weights. The shotgun’s balance point was 2¼ inches in front of hinge pin for slight forward bias. In turn, your left arm got more of workout. The shotgun certainly was not whippy during mount and swing – transitioning quickly from one target to the next during simultaneous pairs.

As with all Blaser F16s, the Intuition has the same wonderful mechanical, selectable trigger as the F3 with its lovely 3.6 pounds of pull. For women, a hard-to-pull trigger often results in jerking down the muzzle right before the shot is taken, because women tend to grip the forend for leverage as they attempt to pull a difficult trigger. Just take note that unlike the F3, the trigger shoe on the F16 cannot be adjusted fore and aft. 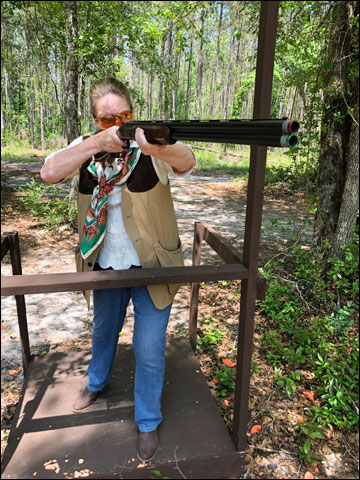 The author shooting the Blaser F16 Intuition on sporting clays.

The Balancer system of the premium F3 has been carried over to the F16 as an option. It allows you to fine tune the weight distribution to your personal needs for the best balance. The system consists of two components: the stock balancer and the barrel balancer. The stock balancer is a threaded rod that can be equipped with one or three weight cylinders. The barrel weights are placed between the barrels, concealed under the forend. 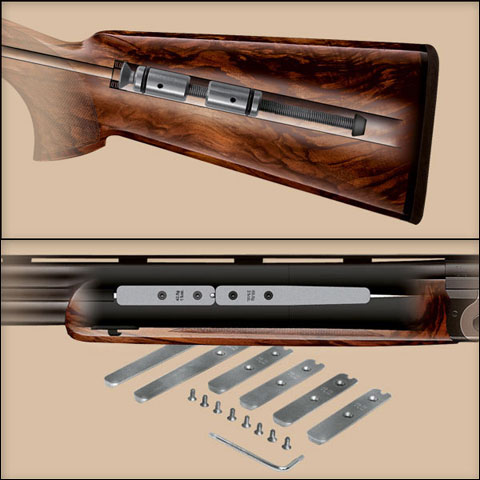 A cut-away of the weight-balancing system available on the Blaser F16 Intuition.

One thing that’s rarely discussed is the effect of forcing cones in the barrels on recoil management. The shorter the forcing cone the more abrupt the transition of shell shot and gunpowder gasses from the chamber to the barrel. Blaser made the wise decision to keep the F3’s Triplex Bore Design of elongated forcing cones for the barrels of the F16. Blaser’s true motive for the taper transition was improved shot patterns for the 28-inch and 30-inch barrels of the Game version and the 30-inch and 32-inch barrels of the Sporting. But women can enjoy the ancillary benefit of diminished felt recoil through the gradual transmission of the shotshell payload. 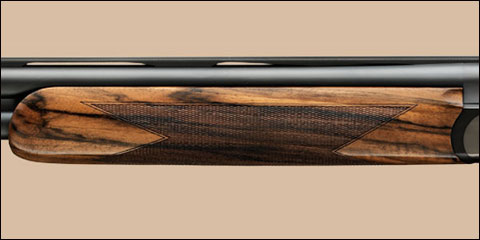 The matte black Blaser F16 barrels are steel-proofed and chrome-lined. The usual complement of chokes is standard. They are classic flush mounted on the Game and for clays the proven Briley extended Spectrum chokes are packaged with the Sport. It has a fluorescent red front bead. Personally, I find these bright front beads a distraction from target focus and if you agree it’s pretty easy to swap for a white or metal bead.

The Blaser F16 Intuition felt well-built and high quality, as evidenced by the tight wood-to-metal fit and flawless barrel finish. Priced at about $4,500 Blaser seemed to emphasize its value proposition on assembly, handling and reliability. For the money you’d expect some nice engraving instead of the plain gray receiver and perhaps a higher grade of Turkish walnut (it comes standard with grade 2, but Blaser emphasizes engineering value compared with some of the Italian lipstick alternatives.

I tried the Blaser F16 Sporting fitted with the 30-inch barrels and a mid-bead on sporting clays here in South Georgia. The target setter is very experienced. He offers a limited number of lollipops; most of his presentations I’d rate as challenging to difficult.

The sight picture on the Blaser F16 Intuition produced clear and whole targets, making the shotgun a predictable shooter for consistent results in the field – resolving a problem for many women wing and clays shooters.

Deborah McKown is the Editor of Shotgun Life. Please send your comments and questions to letters@shotgunlife.com.