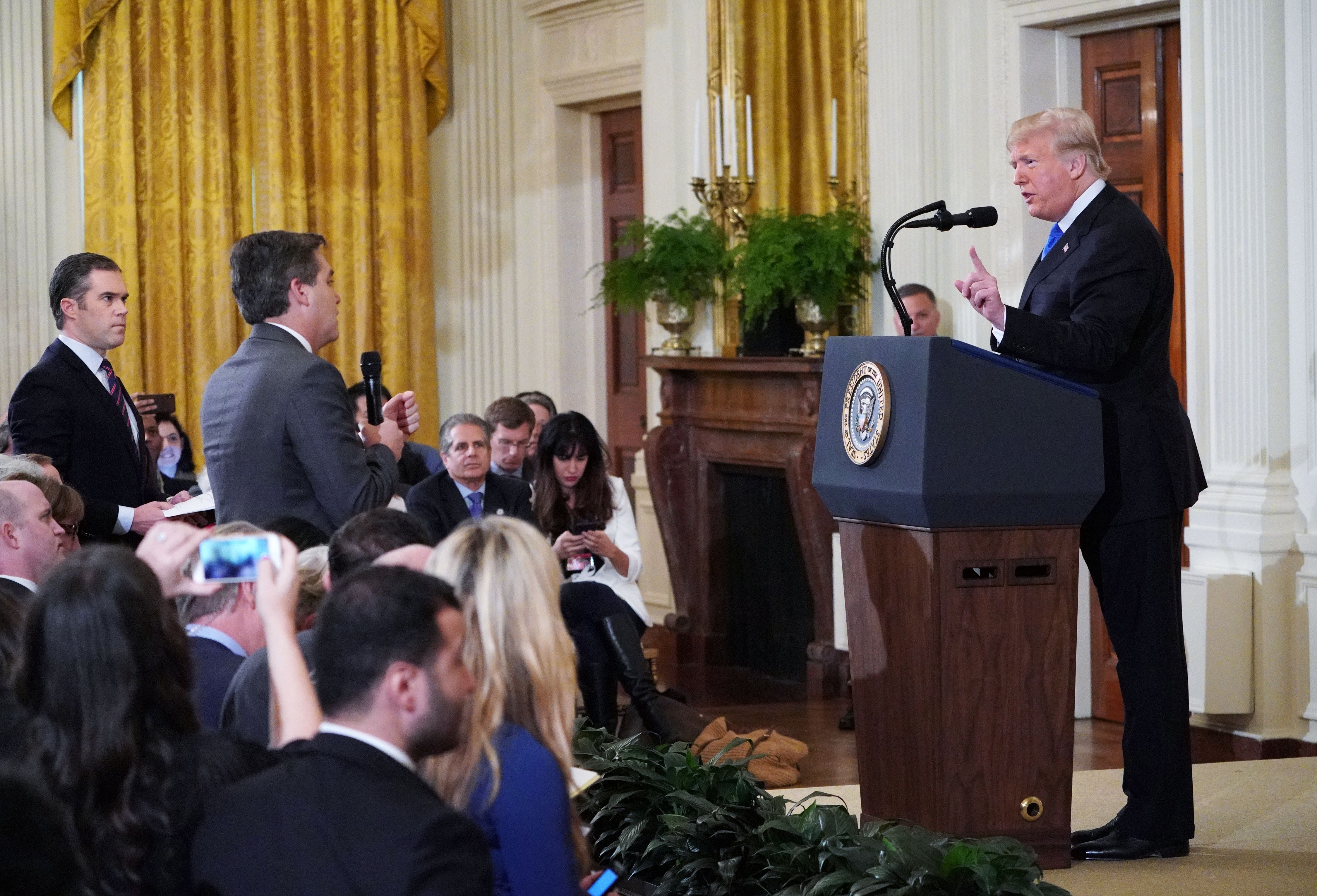 President Donald Trump gets into a heated exchange with CNN chief White House correspondent Jim Acosta as NBC correspondent Peter Alexander looks on during a post-election press conference in the East Room of the White House in Washington, D.C., on November 7, 2018. (Photo: MANDEL NGAN/AFP/Getty Images)

“This afternoon we have notified Jim Acosta and CNN that his hard pass has been restored. We have also notified him of certain rules that will govern White House press conferences going forward,” Sanders said.

CNN immediately responded that it would drop its lawsuit against the administration.

Today the @WhiteHouse fully restored @Acosta‘s press pass. As a result, our lawsuit is no longer necessary. We look forward to continuing to cover the White House.

(1)    A journalist called upon to ask a question will ask a single question and then will yield the floor to other journalists;

(2)     At the discretion of the President or other White House official taking questions, a follow-up question or questions may be permitted; and where a follow up has been allowed and asked, the questioner will then yield the floor;

(3)    “Yielding the floor” includes, when applicable, physically surrendering the microphone to White House staff for use by the next questioner;

(4)    Failure to abide by any of rules (1)-(3) may result in suspension or revocation of the journalist’s hard pass.

“Should you refuse to follow these rules in the future, we will take action in accordance with the rules set forth above. The President is aware of this decision and concurs,” the White House warned Acosta in a letter.

The letter is a remarkable reversal of the course the White House appeared to be taking Sunday when it warned Acosta that his pass granting him temporary access to the White House grounds would be suspended after a temporary restraining order runs its course. The Sunday letter appeared to suggest that it was headed toward fully contesting the case and getting a definitive ruling on First Amendment grounds.

Judge Timothy J. Kelly then ruled however with an injunction Friday ordering the White House to reinstate Acosta’s credentials, saying his Fifth Amendment right to due process was violated. The judge was clear, however, that he made no ruling on whether the First Amendment right applies for any reporter to be at the White House.

Sanders admonished Acosta in the statement. “We have created these rules with a degree of regret. For years, members of the White House press corps have attended countless press events with the President and other officials without engaging in the behavior Mr. Acosta displayed at the November 7, 2018 press conference.”

She added a warning that further rules for conduct in other areas of concern could be set forth.

“It would be a great loss for all if, instead of relying on the professionalism of White House journalists, we were compelled to devise a lengthy and detailed code of conduct for White House events,” she declared.