A Hindu nationalist mob physically assaulted a Catholic priest in India during a prayer service and then had him arrested by blaming him for the incident.

The mob attacked Father Vineet Vincent Pereira on Nov. 14 while he conducted prayers with laymen and ill patients at Ashwar Dham, a rented house where Pereira lives with the laymen and sick residents. The attack began when two men barged into the meeting reportedly seeking argument and then were joined by two others who started beating up a sick resident. Pereira attempted to save the patient and the four men turned on him, accusing him of forced conversions of Hindus. (RELATED: Hindu Nationalists Call For Forced Expulsion Of Christians From India, Trample Popes Image)

“Two local men barged into Ashwar Dham with the intention of causing tension, they were joined by two more people, and these four began beating up one of our inmates. I went to his rescue, and they hit me on the head, pulled my hair and hit me on my arm, making conversion allegations. Soon the number of attackers swelled. The entire incident lasted around ten minutes,” Pereira told Crux Now.

Police took Pereira into custody after the attack, ostensibly for his safety, but then charged him the day afterward for causing the fight.

The men who attacked Pereira were allegedly members of an extremist Hindu youth group called Hindu Yuva Vahini, an organization that tries to “re-convert” former Hindus who convert to other faiths. Pereira conducts prayer services every day at Ashwar Dham, but the Christian services are open to attendants of any faith. 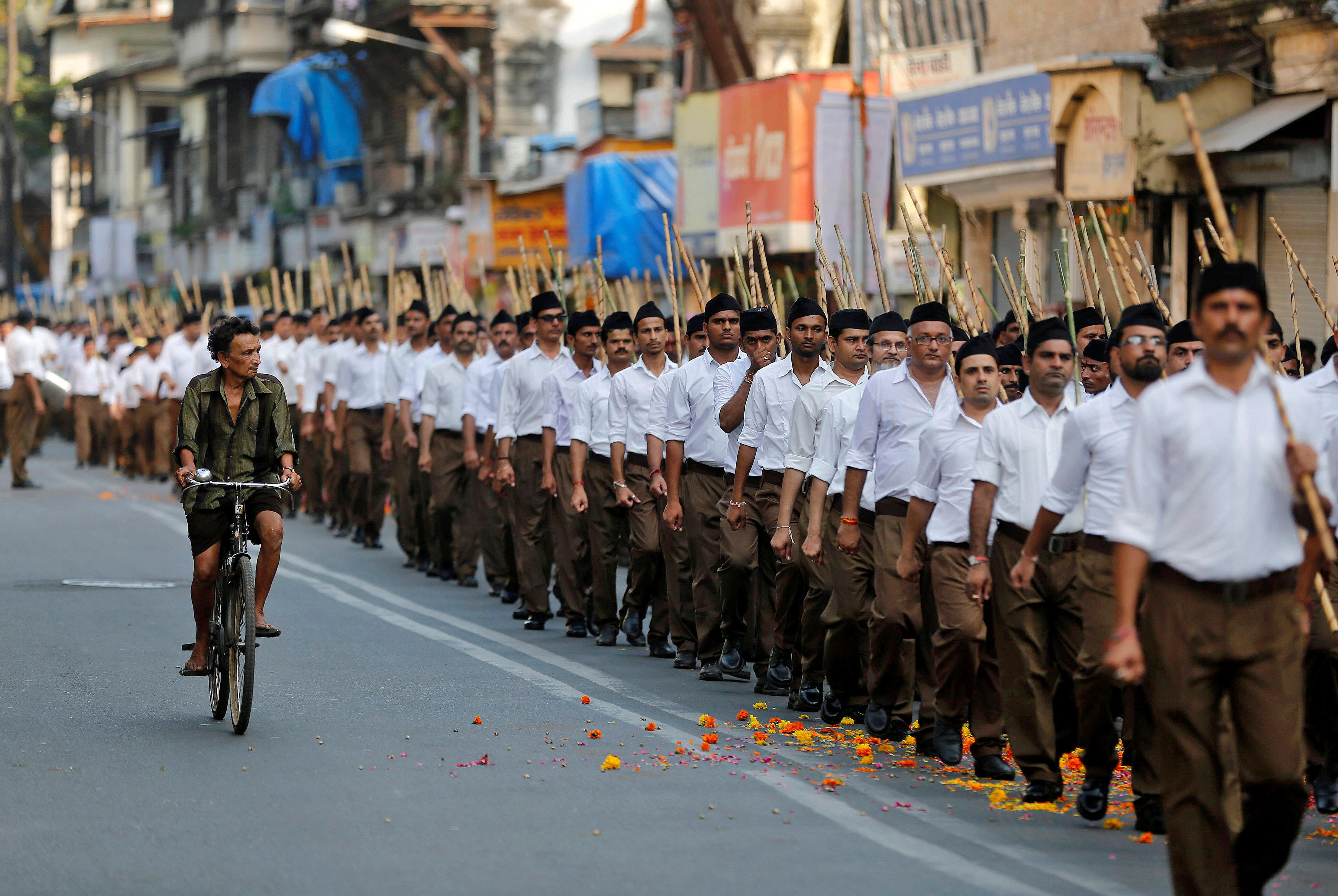 A man rides his bicycle past volunteers of the Hindu nationalist organisation Rashtriya Swayamsevak Sangh (RSS) taking part in the “Path-Sanchalan”, or Route March during celebrations to mark the Vijaya Dashmi or Dussehra in Mumbai, India, Oct. 11, 2016. REUTERS/Shailesh Andrade

Father John Abraham, vicar general for the Catholic Diocese of Varanasi, claimed that Pereira has not converted any of those with whom he lives.

“Father Pereira lives a hermit-like existence and regularly conducts prayers for around 1,500 of these people at his ashram. None of them have become Christians, but they follow Christian spiritual values,” Abraham said.

The attack is the latest in a series of violent incidents that Hindu nationalists have perpetrated against Christians, Muslims and those of the Dalit or “untouchable” caste. Christian leaders claim that Hindu nationalist assaults have grown more frequent in the Indian state of Uttar Pradesh since the Bharatiya Janata Party took control of the national government in 2014. Chapels, churches, Christian schools and converts have suffered these attacks.

As for Pereira, his faith and commitment to service remains undaunted in the face of the attack against him.

“This is a blessing, the Lord’s plan. It has happened for His glory,” he said of the attack. “I am praying for them. I have no anger towards them. My earnest desire is that they should come to know the Love of Christ. They neither know me personally nor my works …They heard about me from others. If they knew me or my work, they wouldn’t have done it.”