The New York Times published a guide on Tuesday meant to help guide the reader through conversation with an “angry uncle” at the Thanksgiving dinner table.

The guide, written by Dr. Karin Tamerius, explains that most people are not used to “socializing with people who think differently from us” and therefore need help dealing with that one relative at Thanksgiving who insists on arguing about politics.

The article includes the “Angry Uncle Bot,” a chat simulator that encourages the reader to agree with everything a family member says in an effort to avoid any sort of debate or confrontation. (RELATED: Youtube Wants To Make You Feel Bad For Celebrating Thanksgiving)

For example, a conversation with the “Liberal Angry Uncle” concludes with the respondent acquiescing that “I agree that no one should have to go without medical care because they can’t afford it.” 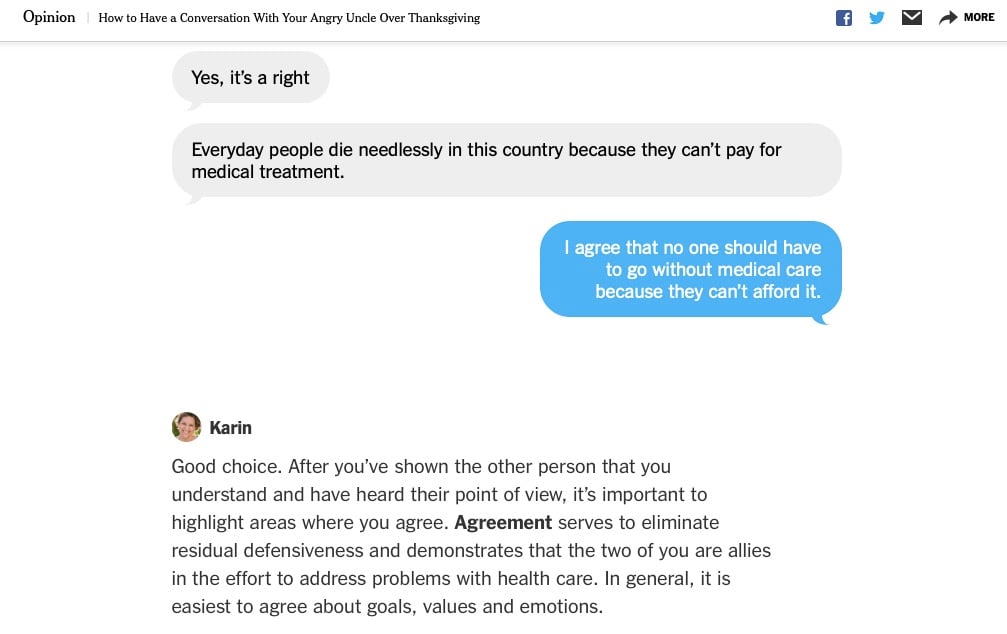 The worst thing one can do when approaching a political conversation, Dr. Tamerius warns, is present logic or evidence to their opponent, as this can make them feel “threatened.”

Noah Rothman of Commentary Magazine summarized the Angry Uncle bot in a Twitter thread, writing, “Your pathway to a successful political discussion with is the following: ask their opinion, internalize their opinion, agree with their opinion, and expand upon their opinion with a concurrence.”

I think it’s funny that you have to tell liberals how to talk to people who disagree with them. https://t.co/lrIKfkRYep