A fizzing glass of Diet Coke sat on the Resolute Desk in the Oval Office in front of a smiling president of the United States.

Donald Trump thanked the staffer who brought it and pointed at me. “Would you like something to drink?” he asked. When is the next time in my life the leader of the free world is going to ask me if I want a drink?

Trump flicked his wrist and off the staffer went, into an adjacent side room, returning moments later with a tall, round glass with a golden Presidential Seal on it. It was set down on a silver coaster in front of me. Fizzing Diet Coke on the Resolute Desk.

This is Trump’s America. I mean, why not? 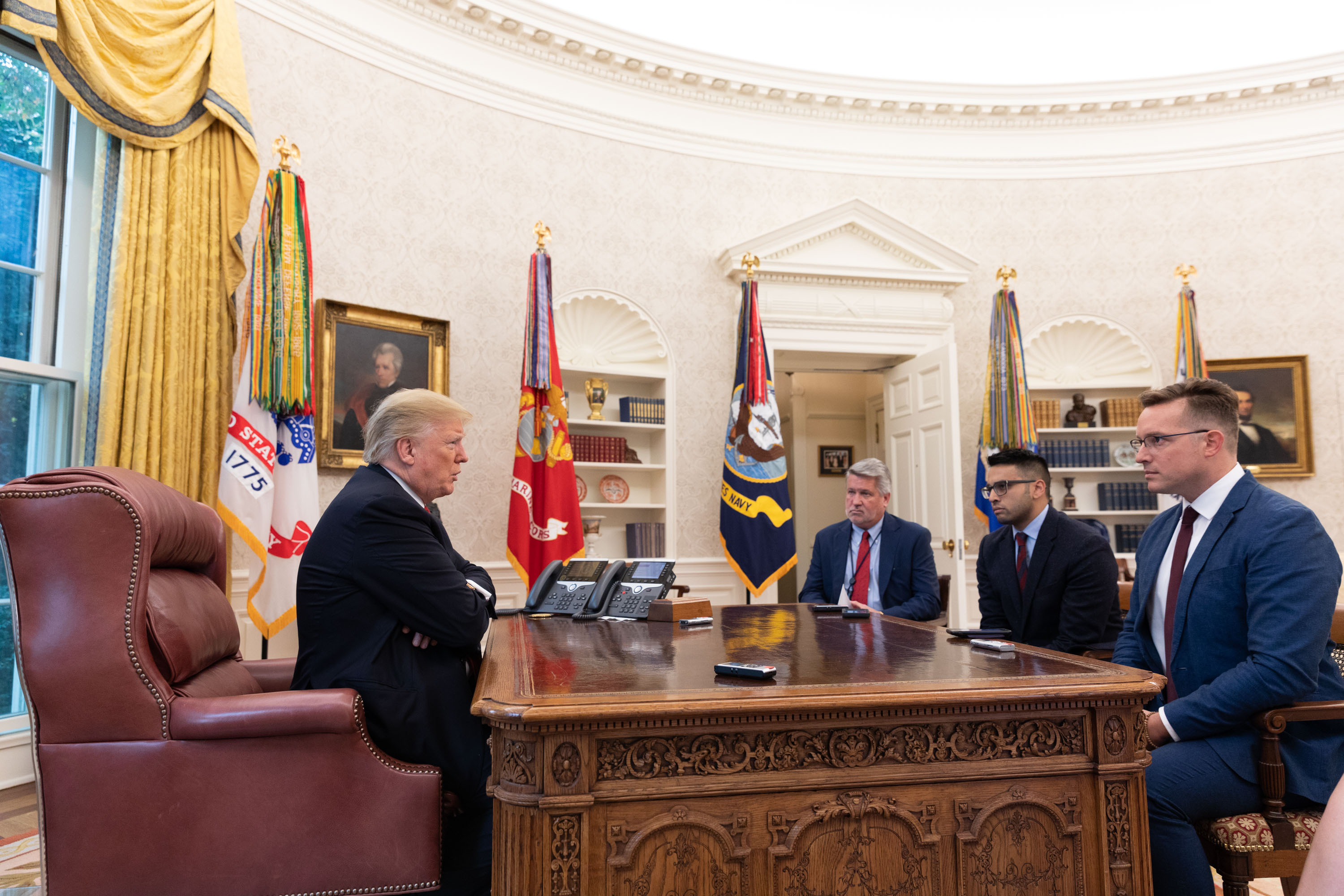 Just an hour earlier, I was at the Daily Caller offices in Washington, D.C., thumbing through Twitter when my phone rang. I answered to hear the panicked voice of Saagar Enjeti, our White House correspondent. “Where are you?!” he demanded. “We got our Trump interview – we need to be at the White House in 30 minutes!” Meanwhile, I had been pitching the president’s communications team on an interview for months. I never thought it would happen like this.

I dashed out of our video production studio and into the newsroom. I was not wearing a full suit. Enjeti tossed me one of his spares. I changed into it in a side office and noticed the shoes I was wearing that day were neon orange Adidas sneakers. Not exactly Oval Office material. I made the case that Kanye West just wore Yeezys into the Oval last month. Enjeti was having none of it. He insisted I change them. I matched shoe sizes with an unlucky staffer in the newsroom and commandeered his more formal leather kicks. Wearing a borrowed suit and shoes, I headed out of the office with Enjeti and breathlessly speed-walked the five blocks to the White House while submitting my vitals to the Secret Service on my cell phone.

We approached the small, heavily gated Secret Service security house at the perimeter of the White House grounds. Saagar flashed his hard pass and entered. I do not have a hard pass and therefore must present multiple forms of identification to a Secret Service officer through a bulletproof glass portal. The officer has to check all of my information into a computer and make me a badge. It’s a big pain in the ass. I can see why Jim Acosta got upset about that. As I was presenting my information, Francesca Chambers of the Daily Mail entered the secure area. I’ve known Chambers for years and while I occasionally enter White House grounds for various events, it is certainly not a normal place for me to work from. 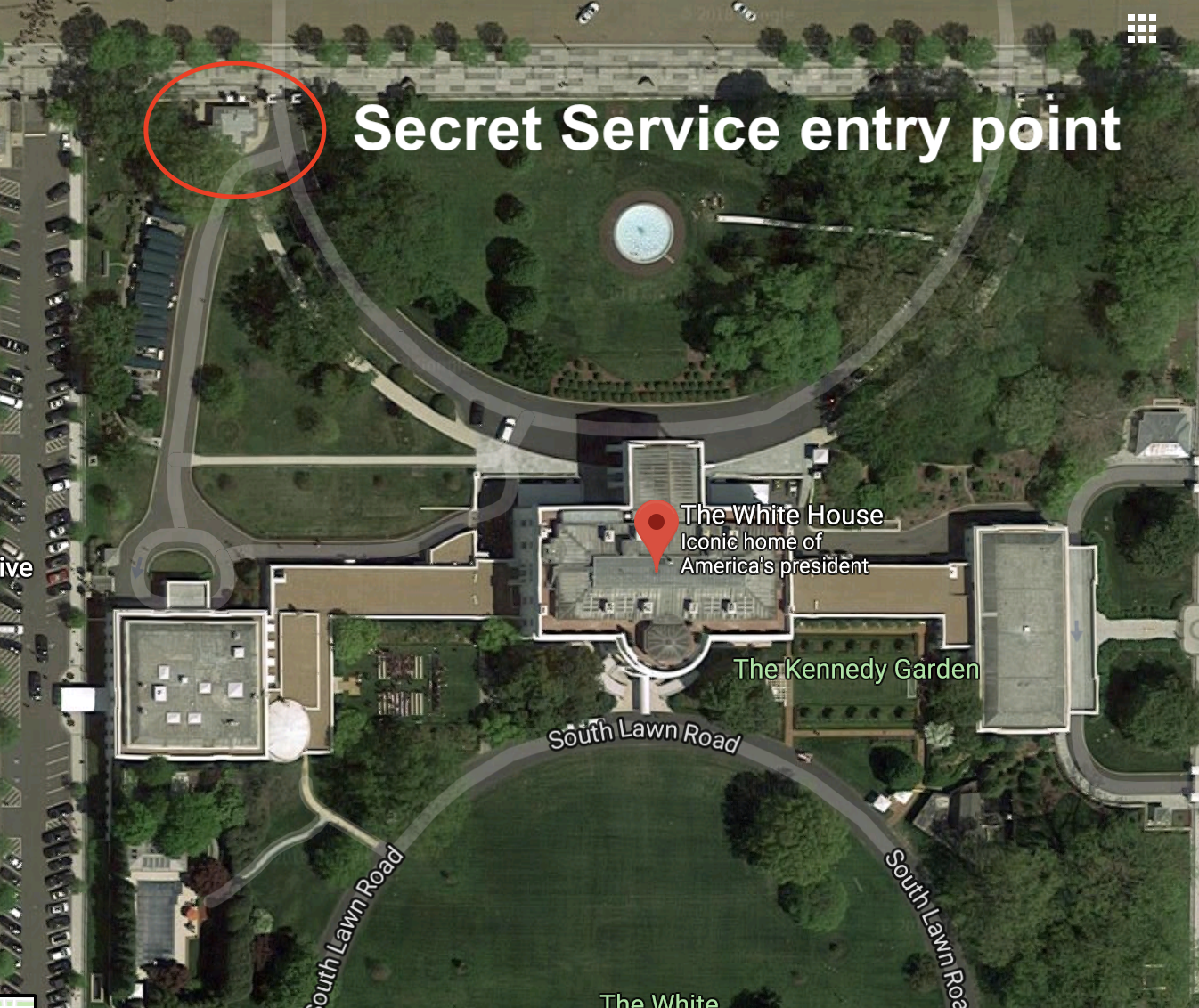 “Benny, what are you doing here? Gonna interview the president?” Chambers asked sarcastically. I laughed nervously and mumbled something about Sarah Sanders. The White House grounds is a bad rumor mill and I did not want news of the interview pinging around on Twitter.

Once the Secret Service officer verifies your information in the White House system he hands you a laminated, blue security badge on a chain which must be worn around your neck at all times. The badge is microchipped – so Secret Service can keep track of how many visitors come and go on White House grounds.

The Secret Service security checkpoint at the White House is similar to a TSA screening before getting on an airplane. You load your bags onto an X-ray machine and walk through a magnetron, which is guaranteed to beep. An officer wands you and you’ll be on your way.

Press are allowed to walk freely along the black driveway that leads from the Secret Service entrance house to the briefing room in the West Wing. 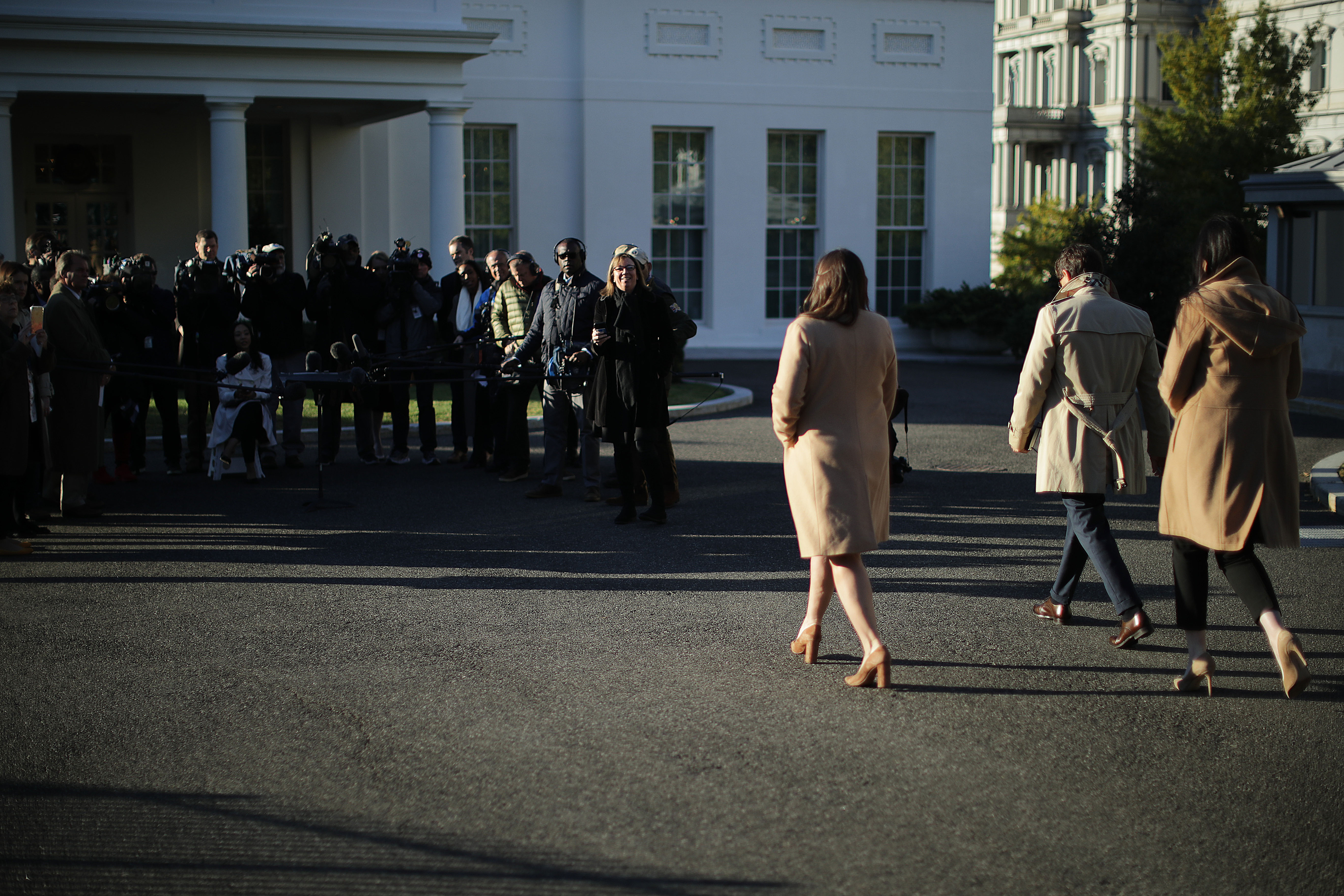 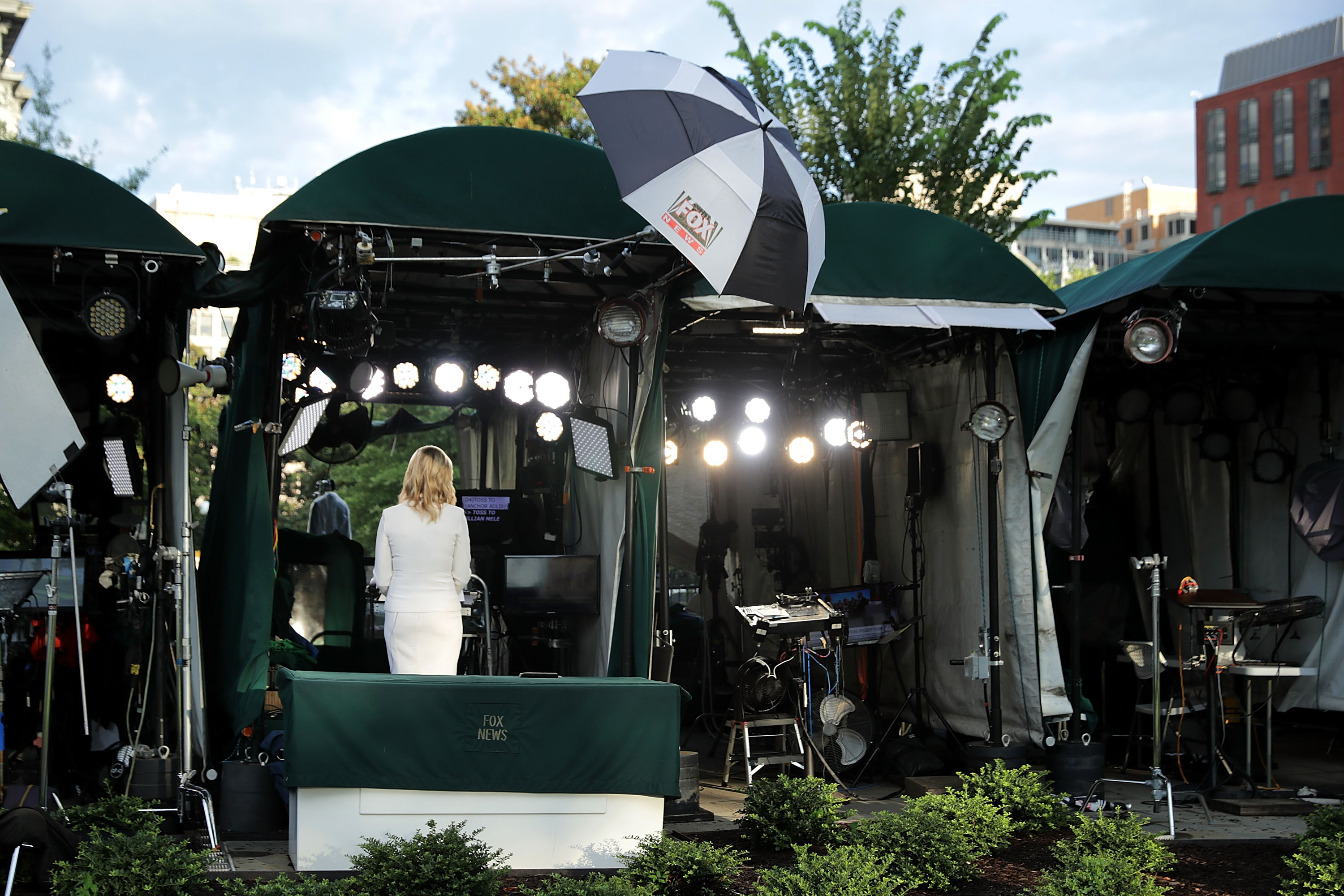 Enjeti and I huddled outside the briefing room in the brisk DC weather to run over our questions. The pitch was for Saagar on policy, and me on culture. We will alternate topics and who asks the questions with the president. Saagar gave me pointers on how to best ask questions of Trump. This would be his second interview, my first. Saagar and I headed into the briefing room, past the iconic press podium, through a sliding door on the side of the stage and back into the West Wing offices. 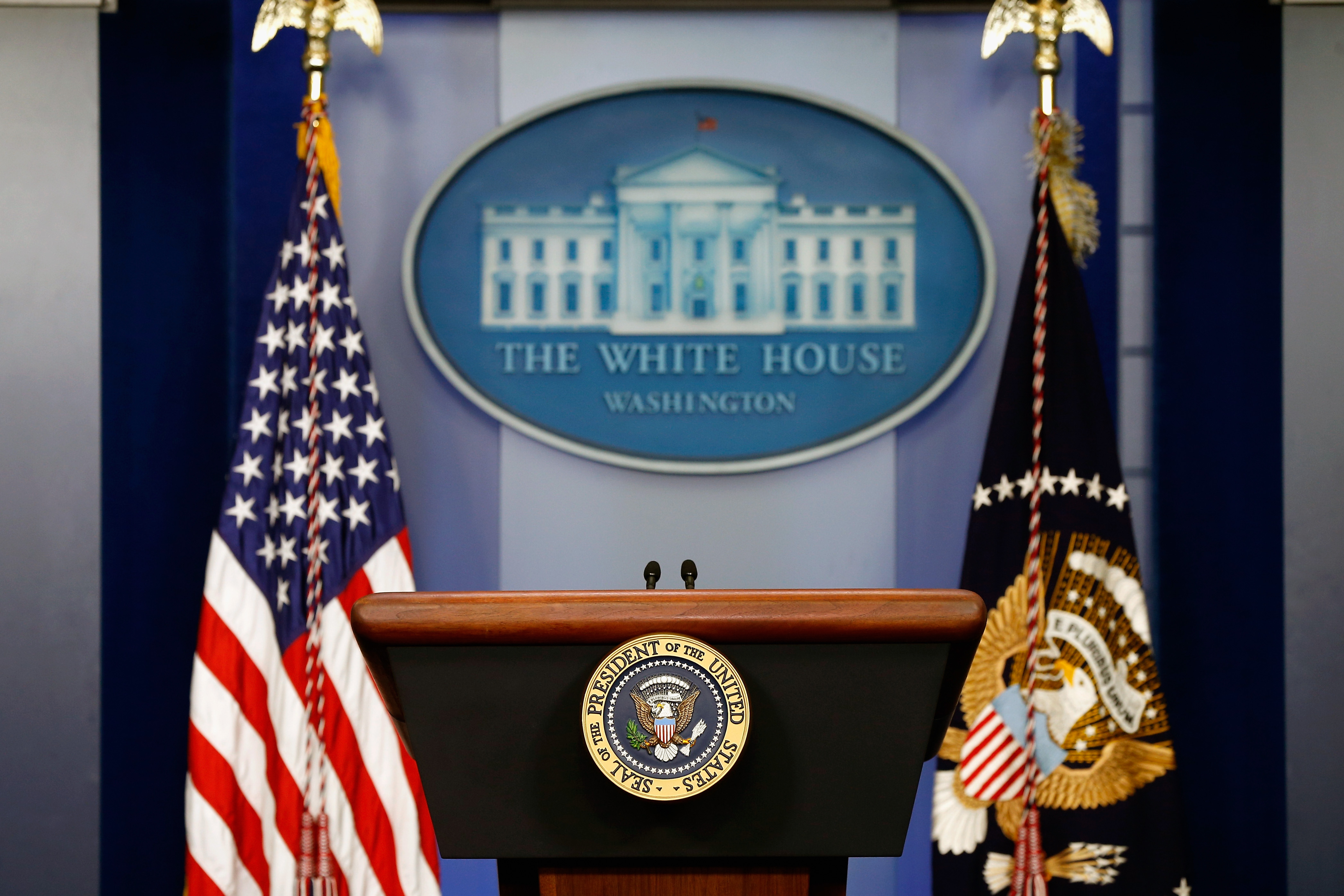 If you have seen the White House depicted by Hollywood, HBO or Netflix – please forget that depiction. Those shots of presidential staffers briskly walking down the hallways, handing manilla folders to one another and huddling in gilded meeting rooms – it’s bogus. The West Wing is small. Very small. When the president is in the building it is buzzing with activity and there is hardly room to move at all. Saagar and I huddled in a cramped reception area outside Sarah Sanders’ office. We made small talk with the five pleasant press assistants sitting in a bullpen between Sanders and White House Communications Director Bill Shine’s office. We talked about Instagram and rolled our eyes over an Omarosa Manigault TV hit. 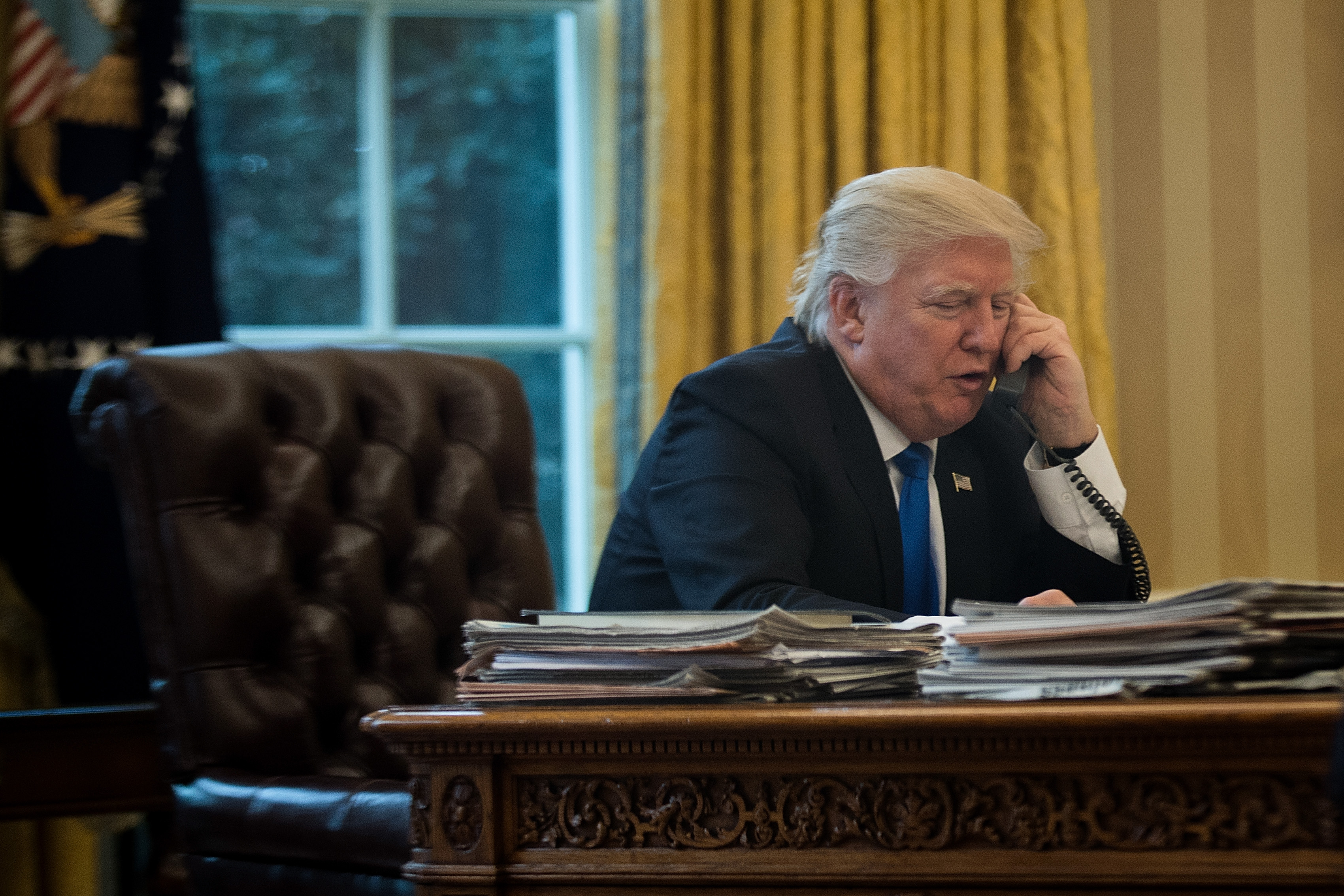 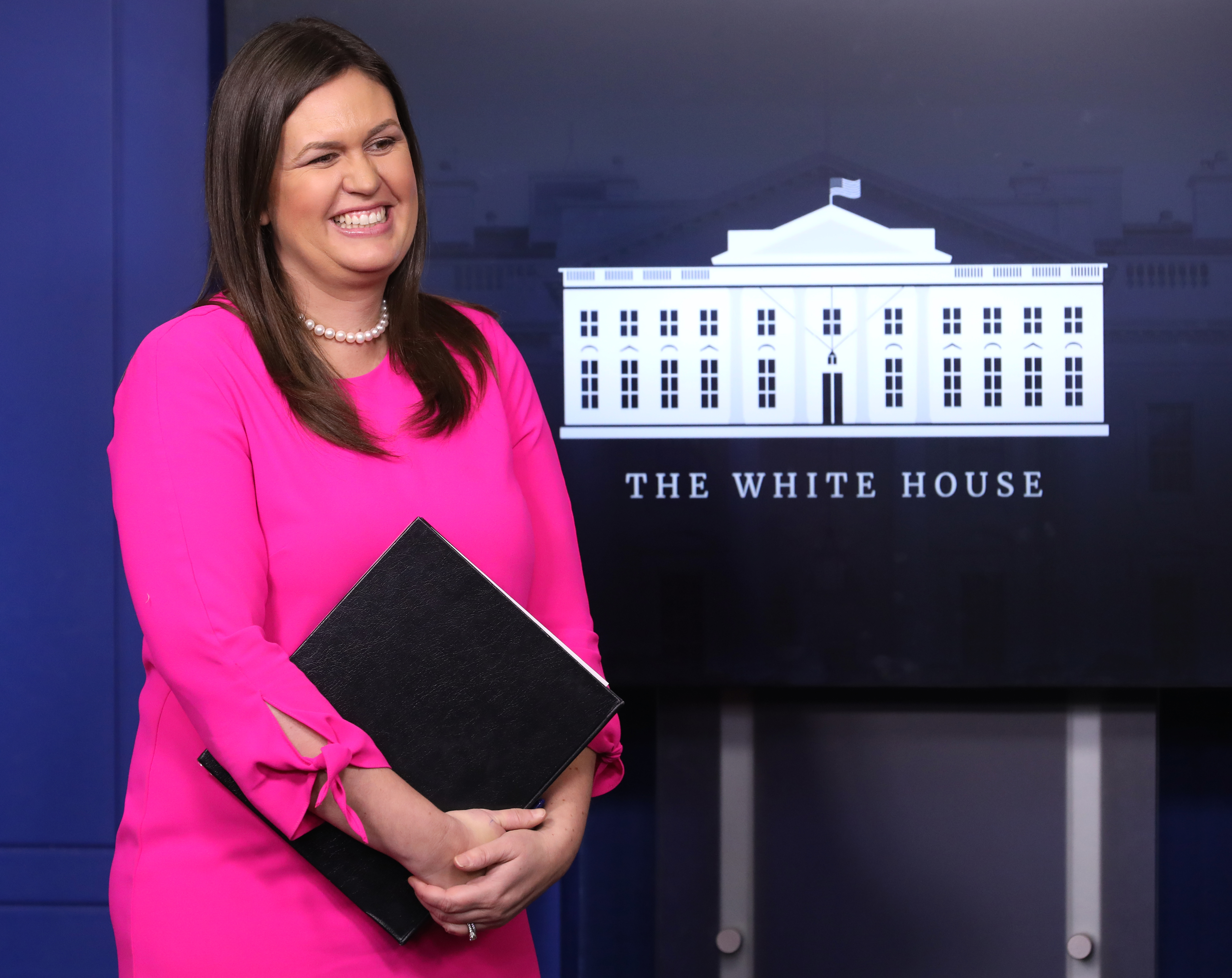 After approximately 10 minutes of waiting, Sanders called to us as she briskly walked down the hallway in a bright green dress. “The president is ready,” Sanders said. “Come with me.”

The walk from our waiting area in the West Wing to the Oval Office was less than a minute.

There are positively no words to describe what it is like seeing the President of the United States, sitting at the Resolute Desk, waiting for you in the Oval Office. You must have a heart of stone not to be momentarily overcome with the history of the place and its significance in the fabric of human history. It is bar-none the most jaw-dropping experience an American can have – and all Americans should be proud of our shared history in this room.

Trump greeted us and shook our hands, as staff cleared his desk of stacks of paperwork, pens and handwritten notes. Trump gripped my hand and lightly yanked me around the desk. “Get a shot of them behind the desk – it’s the best shot,” Trump told the photographer. “You can take off those badges, too,” Trump said to Saagar and me. “You look like tourists.” 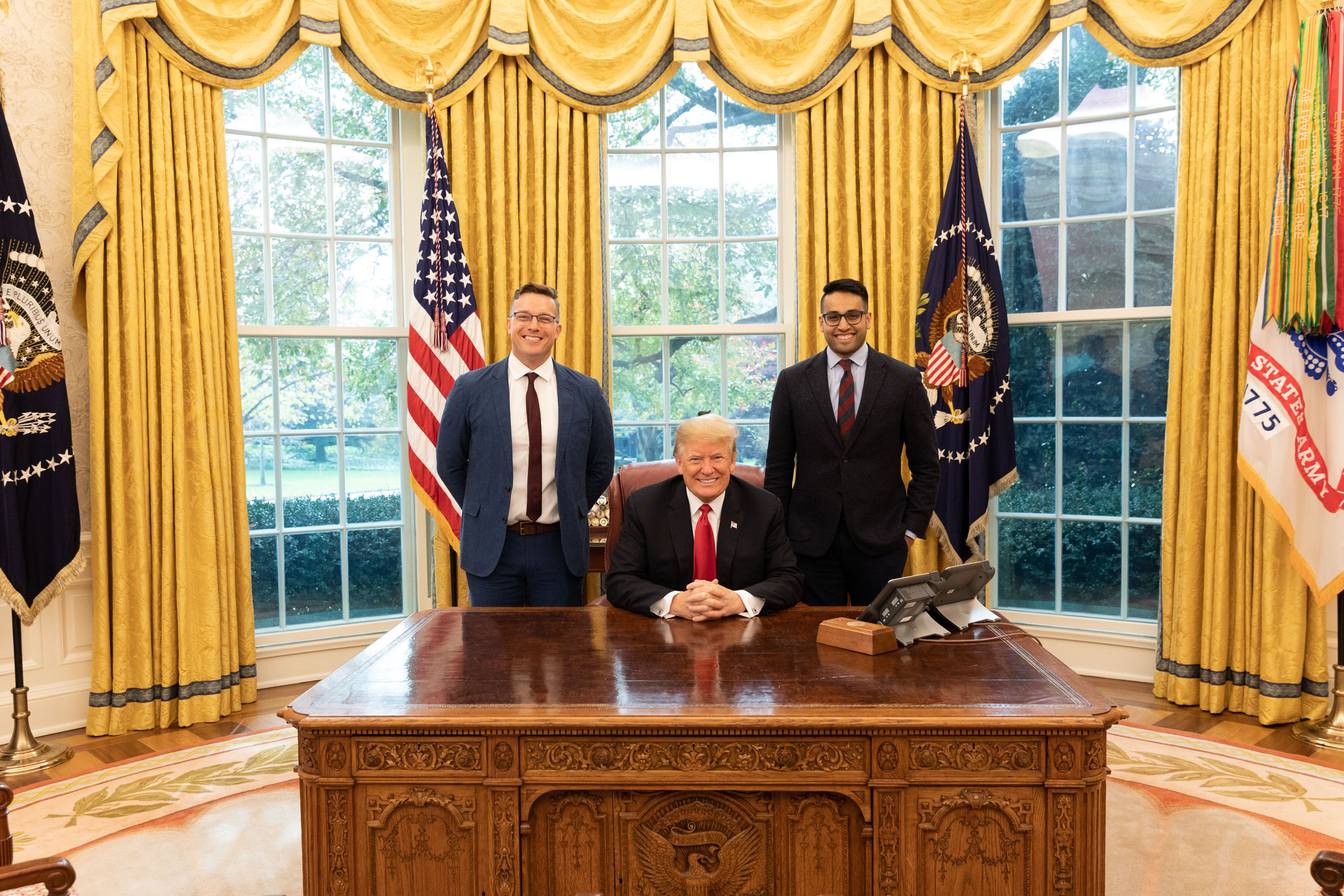 Now comes the point where you have to focus and do your job. I turned on my recorder and readied my questions on Jim Acosta’s White House ban, the Florida recount and Tucker Carlson’s home being mobbed. I took a deep breath and the president asked, “Would you like something to drink?”

Trump’s demeanor was disarming. He was jovial and energetic throughout the wild and rolling interview. At multiple times the president cracked jokes that made the room erupt. A far cry from the brooding, rage-filled, gloomy portrait painted by anonymous sources in the media. The president bounded from topic to topic – rolling a scheduled 15-minute interview into 33 minutes of news-making discussion. 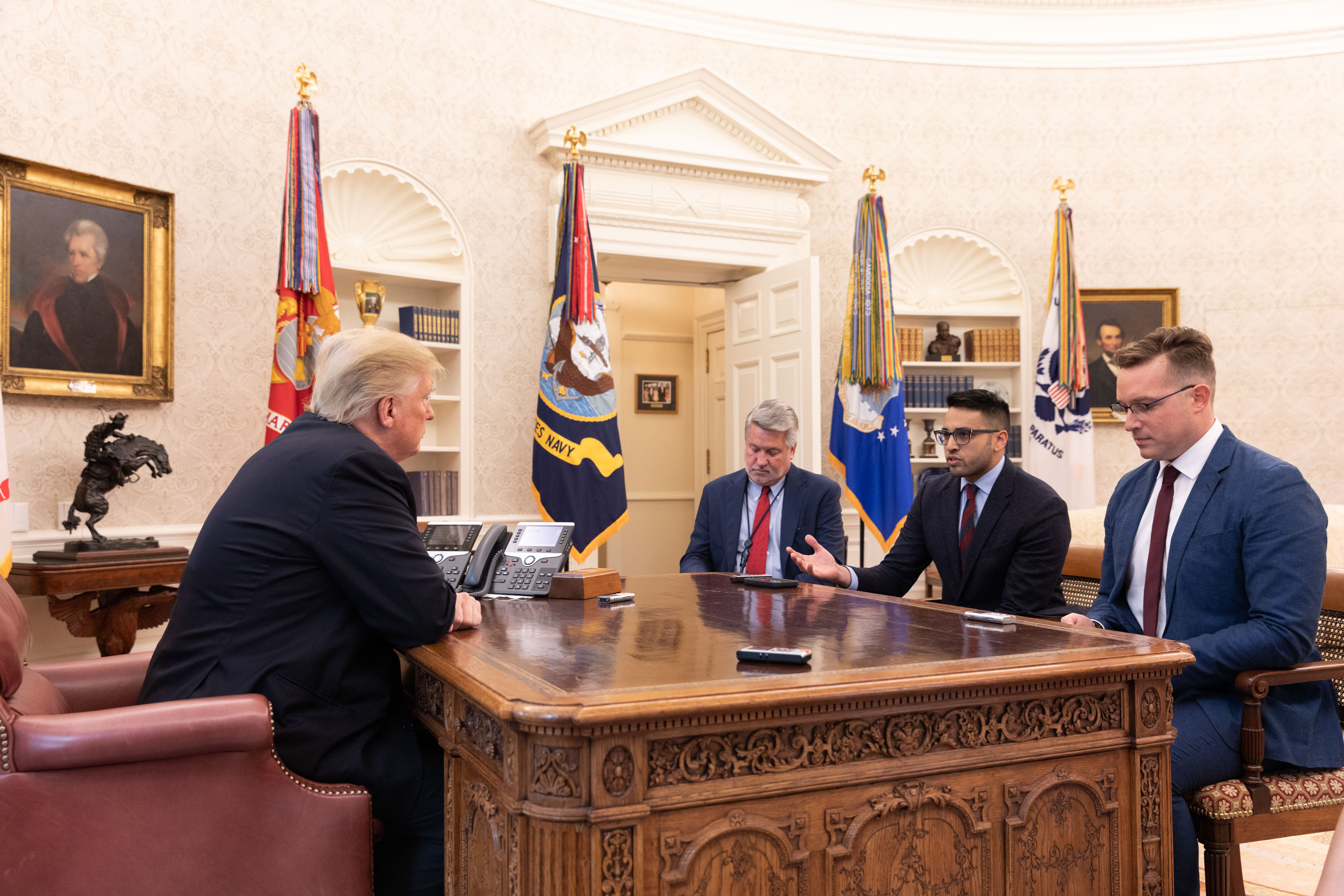 Trump waved off aides who attempted multiple times to move him to the next meeting. “Bring these guys back, Bill,” Trump said to Shine on our way out. “I love these guys.”

The interview was a resounding success – in spite of having 30 minutes notice and wearing a borrowed suit and shoes. We broke news on cabinet shake-ups, CNN/Acosta White House credential, the Florida recount, Brenda Snipes, voter fraud, voter ID and Amazon.

The Washington Post, New York Times, CNN, Fox News, MSNBC and dozens of other outlets covered Trump’s answers to us on a boundless number of topics. Late-night comedy picked up on some segments as well. Stephen Colbert and Jimmy Kimmel both did elaborate bits based on our interview. (REATED: It Was A Normal Morning Until We Got The Notification. 45 Minutes Later, We Were Sitting In Front Of Trump Himself)

We released the entire transcript of the interview on The Daily Caller. But I left out one very important detail: just how damn good a presidential Diet Coke is. Not sure if it was a special recipe – but if Trump ever offers you a drink in the Oval Office – get the Diet Coke.

You won’t regret it.