Melania Trump said the holiday season has officially begun and wished everyone a “wonderful Thanksgiving” with a post on Instagram Wednesday.

“We started the holiday season with the turkey pardon at @whitehouse yesterday. Have a wonderful Thanksgiving!” the first lady captioned her post, along with a few pictures from Tuesday’s annual White House Turkey Pardon Ceremony where she joined President Donald Trump. (RELATED: Ivanka Turns Heads In Gorgeous Yellow Plaid Skirt Suit)

During the event, Trump proudly declared that the turkey named “Peas” had been granted a presidential pardon and would live out the rest of his days at “Gobblers Rest,” an educational facility at Virginia Tech University, per a White House Pool report. 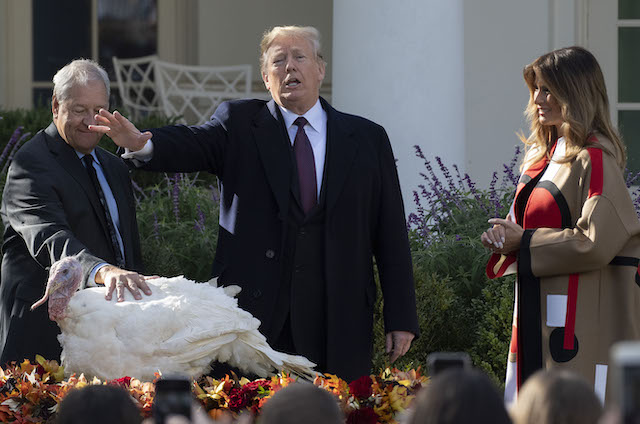 US President Donald Trump pardons the turkey “Peas” during the annual ceremony at the White House in Washington, DC, on November 20, 2018 as US First Lady Melania Trump looks on. (Photo credit: JIM WATSON/AFP/Getty Images)

Soon after, the president announced the turkey named “Carrots” had also been granted a pardon and would join his pal at VA Tech where the two would live out their lives.

FLOTUS and Trump received the annual WH Christmas Tree by a horse-drawn carriage Monday. The first lady looked just as festive as ever, in a gorgeous red tartan cape coat and black boots.

“We received the @WhiteHouse Christmas tree yesterday! It will grace the Blue Room throughout the season – hope you will come to the People’s house to see it,” Trump captioned her post, along with a behind-the-scenes clip of the arrival and placement of the tree.

“The @WhiteHouse is getting ready for the Christmas season! Thank you to the Smith Family & the National Christmas Tree Association for providing this year’s tree. And to our @NatlParkService for their hard work in trimming the tree for the Blue Room,” she added in a second post with some snaps from the day.

And if the video and pictures are any indication, it looks like it’s going to be another gorgeous Christmas celebration this year.