The National Football League served up a double digit increase in the ratings Thursday for Fox and NBC’s network coverage of Thanksgiving football games.

This year’s showdown between the Dallas Cowboys and Washington Redskins ended up scoring a 14.1 in metered market households, which is up by 10 percent from last year’s battle between the Minnesota Vikings and the Detroit Lions, according to a Deadline report published Friday. (RELATED: NFL Ratings Tank–Worst Viewership In Nearly Two Decades) 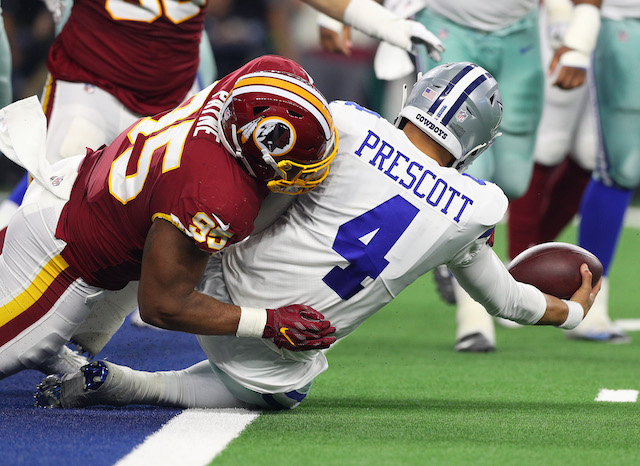 Da’Ron Payne #95 of the Washington Redskins sacks Dak Prescott #4 of the Dallas Cowboys in the first quarter of a football game at AT&T Stadium on November 22, 2018 in Arlington, Texas. (Photo by Richard Rodriguez/Getty Images)

As previously reported, games involving the Cowboys tend to have higher ratings.

In early metrics, the “Peacock Network” appears to be doing even better than its competition with an increase of 18 percent for the New Orleans Saints 31-17 victory over the Atlanta Falcons in primetime for the “Thursday Night Football” game, compared to last year’s Redskins and New York Giants matchup.

In comparison, the fast affiliates numbers show last night’s Saints beat down of the Falcons bringing in an audience of 18.34 million people and 5.5/24 in the same age demographic.

A description about the Nielsen ratings, specifically metered-market homes, explains that it is one of the ways the company captures what people are watching:

In addition to capturing what channels viewers are watching on each television set in the home, our meters can identify who is watching and when, including ‘time-shifted’ viewing–the watching of recorded programming up to seven days after an original broadcast.